What Is Dead May Never Die

What Is Dead May Never Die

At the Red Keep, Tyrion plots three alliances through the promise of marriage. Catelyn arrives in the Stormlands to forge an alliance of her own. But King Renly, his new wife Margaery, and her brother Loras Tyrell have other plans in mind. Balon Greyjoy maps out his strategy of attack while, at Winterfell, Luwin tries to decipher Bran's dreams.

Craster drags his captive Jon Snow back to his keep. He had caught Jon spying on him while he left a baby in the forest for the White Walkers and has beaten him bloody. Craster orders the men of the Night's Watch out of his home, blaming Jon. Lord Commander Jeor Mormont questions Jon about his actions. Jon realizes that Jeor has known all along that Craster is sacrificing his sons. However, Mormont considers Craster too valuable a contact to risk offending, as he is one of their few sources of information and shelter beyond the Wall. Mormont himself is disgusted by Craster's human sacrifices (not to mention his incestuous relationships with his own daughters), but he will not interfere, and forbids Jon from doing so, as Craster has helped many members of the Night's Watch, among them, Benjen Stark. Jon reveals seeing something take the child. Jeor predicts that whatever it was Jon will see it again.

Samwell Tarly gives Gilly a thimble that once belonged to his mother. He promises to come back for her when they make the return journey to Castle Black.

Bran Stark continues to experience strange dreams where he sees the world from the perspective of his direwolf Summer. He follows Hodor into his own bedroom and looks down on himself sleeping. Later, he confides in Maester Luwin, who is dismissive of their significance.

Catelyn Stark arrives in the camp of King Renly Baratheon during a tournament. She watches Brienne of Tarth defeat Ser Loras Tyrell and claim a place in Renly's kingsguard. Renly introduces Catelyn to his new wife, Margaery Tyrell. Renly shows off his 100,000 strong army. Catelyn warns Renly to take the war seriously.

Renly tries to initiate sex with his lover Loras but is rebuffed. Loras reminds him of the importance of fathering an heir and goes to fetch his sister Queen Margaery. Margaery fails to seduce Renly. She is pragmatic about his homosexuality, and suggests including her brother in their love making, asserting the importance of producing an heir.

On the Iron Islands

Theon Greyjoy is included in his father Balon's war council. Balon reveals his plan to attack the lightly defended North while their armies are fighting against House Lannister. Theon is fuming when he is assigned a single ship to raid the fishing villages of the Stony Shore while his sister Yara is put in command of thirty ships and told to take Deepwood Motte. Theon implores his father to reconsider, claiming that if the Greyjoys attack the North, they face the possibility of total destruction if they lose, but if they ally with the Starks and win, Balon will be crowned King of the Iron Islands and House Greyjoy will be awarded Casterly Rock and essentially the source of the Lannisters' wealth along with it, but Balon rebuffs Theon and chastises him for becoming loyal to the Starks. Theon challenges his father's lack of faith in him and reminds him that he gave him up as a ward. Balon reacts by hitting his son and storming out as Theon shouts at him from behind. Theon considers warning Robb about his father's actions, but ultimately reaffirms his loyalty to his family by being baptised by a Drowned Man.

Shae complains to Tyrion Lannister about being confined to his chambers. He liaises with Varys to find her a job that will give her some freedom. Cersei Lannister hosts an awkward dinner for her children and her captive Sansa Stark. Sansa maintains her façade of loyalty to her captors. Shae reports as Sansa's new handmaiden, allowing Sansa to vent some frustration about her inexperience.

Tyrion tests the loyalty of the small council by feeding them each a different plan for a marriage alliance involving Princess Myrcella Baratheon. He uncovers Pycelle as an informant to Cersei when Cersei confronts him about the plan he fed to Pycelle. Tyrion insists on pursuing the exposed plan to marry Myrcella into House Martell of Dorne over Cersei's protests. He has Bronn arrest Pycelle for his treachery. Petyr Baelish is furious about being involved in Tyrion's deception. Tyrion placates him by offering him an opportunity to act as an envoy to Renly and Catelyn.

Arya Stark struggles with insomnia and takes advice from Yoren about coping with her painful memories. He tells her to focus on retribution. They are interrupted by the arrival of Ser Amory Lorch with a force of Lannister men and Gold Cloaks. Yoren marshals the recruits for a battle. He confronts Ser Amory and refuses to comply with his demands that he surrender the royal bastard Gendry. Yoren dies fighting bravely but his recruits are overcome. During the fight Arya rescues Jaqen H'ghar from a fire near the prisoner wagon. Lommy Greenhands picks up Gendry's helmet and is wounded by a crossbow bolt. Arya is incapacitated by Polliver who takes Needle from her. Gendry and Hot Pie are also captured. Lommy begs Polliver to carry him but Polliver stabs him in the throat with Needle instead. Arya convinces her captors that Lommy was Gendry because he was carrying the helmet. Ser Amory orders the prisoners be taken to Harrenhal.

Main article: What Is Dead May Never Die/Recap

Main article: What Is Dead May Never Die/Appearances

"What Is Dead May Never Die" - Preview

"What Is Dead May Never Die" - Inside the Episode

"What Is Dead May Never Die" - Recap

Anatomy of a Scene - Theon Being Baptized

No Longer a Role Model

In Need of a Father

Arya Stark in "What Is Dead May Never Die"./Promotional Image

Bran sees Hodor through the eyes of Summer in "What Is Dead May Never Die"./Promotional Image

Grand Maester Pycelle in "What Is Dead May Never Die"./Promotional Image

Myrcella Baratheon in "What Is Dead May Never Die"./Promotional Image

Shae in "What Is Dead May Never Die"./Promotional Image 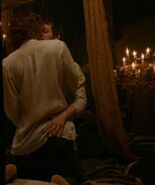 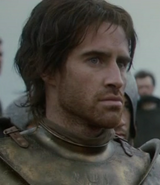 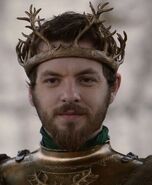 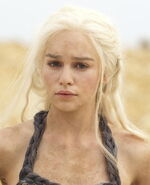 Varys: "Power resides where men believe it resides. It's a trick, a shadow on the wall. And a very small man can cast a very large shadow."

[After a day of being tormented by Joffrey, Sansa Stark attends an awkward dinner with Cersei, and her younger children Myrcella and Tommen. Everyone eats wordlessly until Myrcella finally breaks the awkward silence]
Princess Myrcella Baratheon: (to Cersei) "When will Joffrey and Sansa be married?"
Queen Cersei Lannister: "Soon darling, when the war is over."
Myrcella: (to Sansa) "Mother says I'll have a new gown for the ceremony, and another for the feast." (Quickly thinking of something nice to say to Sansa) "But yours will be ivory, since you're the bride."
(Sansa sits in a stunned silence after being reminded that she will be forced to marry Joffrey)
Cersei: (to Sansa) "The princess just spoke to you."
Sansa Stark: (to Cersei) "Pardon, your grace." (to Myrcella) "I'm sure your dress will be beautiful, Myrcella. I'm counting the days until the fighting's done, and I can pledge my love to the king in sight of the Gods."
Prince Tommen Baratheon: (to Cersei) "Is Joffrey going to kill Sansa's brother?"
Cersei: "He might. Would you like that?"
Tommen: (pausing to weigh the question) "No...I don't think so."
Cersei: (smiling coldly at Sansa) "Even if he does, Sansa will do her duty. Won't you, little dove?"

[At Pyke, Balon Greyjoy looks over a map with Yara and Theon.]
Lord Balon Greyjoy: "The wolf pup has gone south with the entirety of the northern army at his back. While he's tangling with the lion in the Westerlands, the North is ripe for the taking. The ironborn will reave and pillage as it was in the old days all along the northern coast. We'll spread out dominion across the green lands securing the Neck and everything above. Every stronghold will fall to us one by one."

Balon: "What are our words? Our words?"


Theon Greyjoy: "'We Do Not Sow.'"
Balon: "'We Do Not Sow.' We are Ironborn. We're not subjects, we're not slaves. We do not plow the fields or toil in the mines. We take what is ours. Your time with the wolves has made you weak."
Theon: "You act as if I volunteered to go. You gave me away if you remember. The day you bent the knee to Robert Baratheon. After he crushed you! Did you take what was yours then?" [Balon slaps Theon and strides away.] "You gave me away! Your boy! Your last boy! You gave me away like I was some dog you didn't want anymore! And now you curse me because I've come home!"
[Balon strides away while Yara approaches her brother.]
Yara Greyjoy: "You'd have our father bow down to your other family?"
Theon: "I have no other family!"
Yara : "Don't you?" [Yara turns to leave as well.] "Make your choice, Theon, and do it quickly! Our ships sail with or without you."

Cersei: "You monster! Myrcella is my only daughter. Do you really think I will let you sell her like a common whore!?"


Tyrion Lannister: "Myrcella is a princess! Some would say she was born for this!"
Cersei: "I will not let you ship her off to Dorne as I was shipped off to Robert Baratheon!"
Tyrion: "Dorne is the safest place for her."
Cersei: "Are you mad? The Martells loathe us!"
Tyrion: "That's why we need to seduce them. We're going to need their support in the war your son started!"
Cersei: "She'll be a hostage!"
Tyrion: "A guest."
Cersei: "You won't get away with this! You think the piece of paper father gave you keeps you safe? Ned Stark had a piece of paper too."

Tyrion: "You disappoint me, Grand Maester."


Pycelle: "I am your loyal servant."
Tyrion: "So loyal that you told the queen about my plans to send Myrcella to Dorne."
Pycelle: "No, never! It's a falsehood, I swear it! It wasn't me. Ah, Varys! It was Varys, the Spider..."
Tyrion: "See, I told Varys that I was giving the princess to the Greyjoys. I told Littlefinger that I planned to wed her to Robin Arryn. I told no one that I was offering her to the Dornish. No one but you."

Tyrion Lannister: "Cut off his manhood and feed it to the goats."

Tyrion: "How many Hands have you betrayed, Pycelle? Eddard Stark, Jon Arryn..."


Pycelle: "Lord Arryn! He knew, he knew the tr-truth abou-about the Queen and he planned to act, to tell King Robert!"
Tyrion: "So you poisoned him?"
Pycelle: "No! Never!"
Tyrion: "But you let him die! Made sure he succumbed!"
Pycelle: "Lannister, I've always served Lannister!"
Tyrion: "Get him out of my sight! Throw him in one of the black cells!"

Main article: Differences between books and TV series/Game of Thrones: Season 2#What Is Dead May Never Die