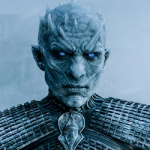 Hi, welcome to Game of Thrones Wiki! Thanks for your edit to the User:SharkyBytesz page.

Copy the code for this collapsible navigation menu, and reverse-engineer it to your own needs: http://gameofthrones.wikia.com/wiki/Template%3ANavigation/Beyond_Westeros --The Dragon Demands (talk) 00:26, August 30, 2015 (UTC)

Thanks for the help :) Lord Sharky (talk)

aren't you the Lord of House Sheogorath?

The articles have been locked because of the constant edit skirmishes over if Jaime is lord or not. The Viewer's Guide makes no mention of Jaime laying claim to his father's titles.--Gonzalo84 (talk) 21:08, June 22, 2016 (UTC)

Oh, well thanks anyway for the elaboration. :) Lord Sharky (talk)

Actually sometimes they do have heraldry in special cases even on this wikis like for the Dragons. Nothing wrong with it if they are notable animals and play a large part in the story. Ease up.

P.S. I didn't name them bastard's girls. I just did the heraldry. By all means give them whatever proper name you feel they should have as related to the tv show.

"Ease up". What do you mean? I was completely calm when I made that edit, and am right now. Second, you removed the "Articles with conjectural titles" template for some reason, and I put it back, because the dogs aren't called "Bastard's girls" in the show, they are only ever called so in the books; therefore, conjectural. Third, I think it's you that needs to "ease up". I changed my last edit, if you weren't paying attention.

Are you or have you ever been?

If you were previously sworn to House Bolton as its stated by sigil on your profile, then why do you have such animosity against Ramsay? :( Or were just loyal to Roose? I'm at a loss for trying to understand how you favored House Bolton.

P.S. Now we both are White Walkers lol Ramsay

I despise Ramsay as a character, but I love him as a villain. As for Roose, I always respected his - albeit traditional - ways of ruling. House Bolton has always been one of my favorite Houses. Now that they are extinct, I have sided with the White Walkers. Lord Sharky (talk)

Thank you so much for reanstating that image. It's just when Eko is Okay put the first image up, I put a zoomed out one in, hoping someone would recrop it. I just don't know how to "undo revision...". Thanks for putting the orignal image back.

I've protected your page to prevent that "anon" from Eko's page from retaliating against you.Shaneymike (talk) 20:05, December 16, 2016 (UTC)

Thanks. It's much appreciated. :) Lord Sharky (talk)

You asked: Valyrian steel cuts through other metals? When was that shown/mentioned?

When Brienne fought Baelish's men, Oathkeeper broke one their swords. I'm not sure if this was supposed to show that Valyrian breaks regular metal swords or it was supposed to show how strong Brienne is - or maybe it's a combination of the two. For a different Brienne swordfight, did Brienne break Sandor's sword when they fought over Arya? I can't remember.

Valyrian steel can't really "cut other metals". Only in the sense that iron/steel weapons can cleave into weaker bronze metal armor, but it's not like a knife carving through cheese. Yes a sufficiently strong warrior wielding a valyrian steel sword can break a regular iron sword as Brienne did (probably a lower quality iron forging).

Basically, no, don't describe it as "able to cut through other metals", but "surpassing iron steel as steel surpasses bronze, Valyrian steel can even carve into regular iron armor" etc. etc.--The Dragon Demands (talk) 02:12, January 24, 2017 (UTC)

In the Netherlands, most movies and tv shows use subtitles, not dubs; I've seen the entire show in English.

That said, I did have a chance to see a small scene in the German-dubbed version of GoT (in Season 7, just before Sansa reunites with Bran). The accents seemed the same to me (but maybe that's because I'm not well-indulged in German, or maybe because the characters in that scene - Wolkan, Littlefinger, and Sansa - use the same southern English accents as opposed to the Northern Irish-y accent most Northmen in the show use.) SharkyBytesz (talk) 21:58, August 13, 2017 (UTC)

Why did you undo my revision about Gilly, Sam, and Rhaegar, please?

Why did you undo my revision about Gilly, Sam, and Rhaegar, please?

Retrieved from "https://gameofthrones.fandom.com/wiki/User_talk:LordOfTheNeverThere?oldid=371110"
Community content is available under CC-BY-SA unless otherwise noted.