View source
watch 01:33
Wiki Targeted (Entertainment)
Do you like this video?
Play Sound

"The Winds of Winter'"

The Faith of the Seven

Faith of the Seven

Unella was a Septa of the Faith of the Seven and a devoted follower of the High Sparrow.

Unella grabs Cersei Lannister when she is arrested by the High Sparrow and throws her into a cell underneath the Great Sept of Baelor with the aid of Moelle and Scolera.[1]

Unella routinely visits Cersei in her cell and offers her a ladle of water on the condition that she confess. Cersei, prideful and infuriated, refuses Unella's advances, repeating to the septa that her face will be the last one she sees before she dies.[2]

Eventually, however, Cersei gives in and confesses her adultery with her cousin Lancel. The High Sparrow allows Cersei to return to the Red Keep in order to be with her son King Tommen, but first she must perform a walk of atonement. Unella is present when Cersei is stripped naked and washed by two other septas before her hair is roughly cut short. She later accompanies Cersei as she is forced to walk naked from the Great Sept of Baelor to the Red Keep with a handful of Faith Militant members to keep away the leering and jeering crowds who have gathered to see her shame and seize the opportunity to insult a Queen. As she walks, Septa Unella accompanies her crying out "Shame!" repeatedly while ringing a bell to attract the attention of the population.[3]

While Septa Unella reads from the Seven Pointed Star regarding sin to an imprisoned Margaery Tyrell, the latter inquires about her brother Loras Tyrell's condition, who was likewise imprisoned. However, Unella says she must confess her sins first. When the Queen demands to know the condition her brother is in, the septa moves to strike her, much to Margaery's horror. At that precise moment, the High Sparrow steps in and stops Unella, ordering his acolyte to attend the Faith's 'other guests'. After the septa leaves, he admits that at times Septa Unella takes her devotion too far.[4]

Some time later, Unella brings Margaery to the High Sparrow. When Margaery correctly recognizes the High Sparrow paraphrasing his life from the Book of the Stranger, he expresses surprise, and Margaery explains that Unella frequently reads the Book at her. The High Sparrow chuckles and agrees that Unella has a habit of reading at people instead of to them.[5] Unella is present on the steps of the Great Sept as Margaery is about to do her walk of atonement, likely with the intent of again ringing the bell. She remains silent throughout the Tyrell army's aborted rescue attempt and Tommen's announcement of a new alliance between the Faith and the Crown.[6]

Unella has apparently been assigned to watch over Queen Margaery non-stop. The septa is naturally present when Olenna and her granddaughter are finally reunited, much to the Tyrell matriarch's ire. The Queen of Thorns wastes no time in telling Unella off and even tries to intimidate her. Unella is made of sterner stuff though and remains implacable. When Margaery reveals she is 'truly' devoted to the Faith, to her grandmother's shock a hint of a smile appears across Unella's lips. Unbeknownst to Unella, Margaery clandestinely reveals her loyalty to Olenna via a hidden sketch of the Tyrell rose.[7]

After the destruction of the Sept of Baelor with wildfire, Cersei has Unella imprisoned within the Red Keep's dungeons and restrained on a rack. After tormenting Unella by pouring wine on her face, the Queen confesses that she killed Robert Baratheon, that she had committed incest with her brother and bore his children, and that she destroyed the Sept, killing the High Sparrow and the Faith Militant, admitting that she enjoyed committing every act. Cersei accuses Unella of not truly caring about Cersei's atonement when Cersei was imprisoned by the Faith Militant; rather, Unella tortured Cersei solely for her own sick satisfaction.

Cersei then reminds Unella that she told her that her face would be the last thing she sees before she dies, and Unella responds that she is ready to die today. However, Cersei taunts her that she will not actually die today, not for a very long time (she intends to have her slowly tortured). She then introduces Unella to Ser Gregor Clegane and leaves the two inside the cell, as Unella screams in horror when she sees what is beneath Gregor's helmet. As Cersei locks the door and leaves she mockingly chants "Shame! Shame! Shame!", as Unella did during the Queen's walk of atonement.[8]

After the Red Keep is destroyed by Daenerys Targaryen via dragonfire during the Battle of King's Landing, Unella's fate remains unknown, though it is very unlikely that she survived the destruction.[9] It is also possible that she died before the battle but this is also unknown. 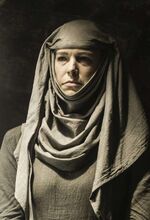 Cersei pouring wine over the face of the bound Unella.

In the A Song of Ice and Fire novels, Septa Unella is described as big boned with callused hands and a scowling homely face. She is a member of the Most Devout, a council of septons and septas that rule the Faith of the Seven under the leadership of the High Septon.