"The House of Black and White"

"What Is Dead May Never Die"

Impaled through the back of the head by Obara Sand

"Your son is weak, like you. And weak men will never rule Dorne again."
―Ellaria Sand to Doran Martell on Trystane.[src]

Prince Trystane Martell was the eldest son and heir to Prince Doran Martell. He was betrothed to Myrcella Baratheon.

He was murdered along with his father, Prince Doran, by Ellaria Sand and the Sand Snakes in an act of retaliation for his father's inaction against House Lannister for their crimes against House Martell.

Prince Trystane is a member of House Martell, the ruling house of Dorne. He is the only son of Prince Doran Martell, Lord of Sunspear and Prince of Dorne. Like his father Doran, Trystane lacks (for the most part) the hotheadedness typical of Dornishmen, as evidenced by his showing mercy to Bronn for attacking him.

Trystane is proposed as a potential marriage candidate for Princess Myrcella Baratheon by her uncle, Hand of the King Tyrion Lannister.[1] The alliance with the Prince of Dorne is accepted and Myrcella is sent to Dorne as a ward of House Martell.[2]

Trystane walks and flirts with his betrothed Myrcella in the Water Gardens during the argument between Ellaria Sand and Prince Doran Martell, unaware of the danger their union creates.[3] When Jaime Lannister and Bronn enter the Water Gardens, Trystane is again taking a walk with Myrcella, with Trystane suggesting they should ask Doran to have them married the next day. Myrcella asks if he only wants to marry her because they are both from Great Houses, but Trystane cuts her off with a passionate kiss. Doran, observing the happy couple, muses to Areo Hotah that they don't realize how much danger they are in and that they must be protected.

While kissing Myrcella, Trystane encounters Bronn and Jaime in the Gardens. Although he introduces himself courteously enough, he is clearly suspicious, having heard no news of Jaime's visit to Dorne; his suspicions are aroused further when he sees bloodstains on the stolen robes Jaime and Bronn are wearing. Although Bronn cautions him not to do something stupid, Trystane reaches for his sword, forcing Bronn to knock him out, to Myrcella's distress. Jaime then attempts to take Myrcella out of the palace, but he and Bronn are then attacked by Trystane's cousins, the Sand Snakes. The skirmish ends when all five of the intruders are arrested by Areo Hotah and his guards.

Doran invites Trystane, Myrcella, Ellaria, and Jaime to drinking and eat with him. There, he promises Jaime that he does not want a war with the Lannisters and that he will send Myrcella back to King's Landing. However, Trystane and Myrcella's betrothal is to stand, which means Trystane will accompany his betrothed to the capital. He will also take up Oberyn's vacant seat on the small council, to further cement the alliance between Dorne and the Iron Throne. Jaime accepts these terms. Jaime then brings up the matter of Bronn, who is still imprisoned as a result of his aggression on the prince. Doran defers to Trystane to decide, as he must learn how to punish lawbreakers if he must one day rule. Trystane agrees to let Bronn go on one condition: he will receive the same thing that he inflicted upon him. This meets with his father's approval and Bronn is brought before them and Areo elbows him hard across the face. Trystane later accompanies Jaime, Myrcella and Bronn to the harbor of Sunspear, where he remains silent, as the others say farewell to Prince Doran and Ellaria. However, Trystane's life is put in danger when Ellaria and the Sand Snakes secretly poison Myrcella. [4]

To ensure Trystane's safety and avoid a conflict with Dorne, Jaime leaves him on board the ship once they reach King's Landing. As Trystane paints the eye stones for Myrcella's funeral, he is approached by Obara and Nymeria, having been sent by Ellaria to kill him, who has herself murdered Doran back in Dorne. Trystane attempts to reason with his cousins that they are family, but they merely laugh it off. He is given a choice to fight Obara or Nymeria. Though he draws his sword and prepares to fight Nymeria, as she is armed with only a whip, he is stabbed through the back of the head by Obara and killed instantly, much to Nymeria's annoyance.[5]

A small justice is enacted for Trystane when Obara and Nymeria are slain by Euron Greyjoy.[6]

Full size promotional image as seen above from Season 5. 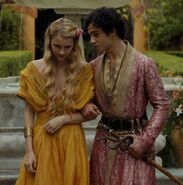 The couple spends time in Dorne. 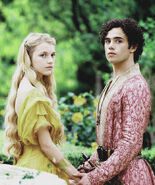 Trystane and Myrcella in the gardens of Dorne.

Trystane is killed by his own cousin in "The Red Woman".
Add a photo to this gallery

In the A Song of Ice and Fire novels, Prince Trystane is the youngest son of Prince Doran Martell, the ruler of Dorne, and third in the Martell line of succession. He is the younger brother of Arianne and Quentyn Martell. He has olive skin and straight black hair. He is two years older than Myrcella Baratheon, making him about 12 years old when they are betrothed.

In the novels, Trystane and Myrcella get along well, but never declare their love nor kiss.

Trystane does not participate, and perhaps has no idea of his sister Arianne's plan to crown Myrcella. The plan is foiled as Areo Hotah intercepts Arianne's party. During the commotion, one of Arianne's escorts, Ser Gerold "Darkstar" Dayne, slashes at Myrcella. Unlike in the show, Myrcella survives but is terribly disfigured. It is unknown how Trystane reacted when he heard about that.

One of Cersei's ill-conceived schemes is to assassinate Trystane (it is not explained what she intends to gain by that). For that purpose, she sends Ser Balon Swann to Dorne, while the formal reason of his coming is to take Myrcella back and invite Doran and Trystane to King's Landing. The plan is as followed: on the way to King's Landing, somewhere in the kingswood, Ser Balon’s party will be attacked by outlaws, and Trystane will die. Prince Doran was asked to court only so that he may witness that attack with his own eyes, and thereby absolve Cersei of any blame. The outlaws will be shouting "Halfman, Halfman" as they attack. Ser Balon may even catch a quick glimpse of Tyrion, though no one else will. However, unbeknown to Cersei, the Martells have friends at court, and they forewarn Doran about the scheme.

When Doran tells his daughter and the Sand Snakes about Cersei's scheme, they are shocked and can hardly believe - that Cersei seeks to murder Trystane, and that a Kingsguard knight is involved. Obara is furious, suggesting to kill Ser Balon and his party, and send their heads to Cersei. Doran rejects her offer, since Ser Balon is their guest and since the time is not yet come for Dorne to act openly against the Iron Throne. He explains in details how he intends to foil Cersei's plan without open defiance.

In "Arianne II" sample chapter of the sixth novel, it is mentioned that Trystane has remained safely back in Sunspear, after a tearful parting from Myrcella, who is currently on the way back to King's Landing accompanied by Nymeria Sand.

So far in the books, Trystane is alive.

The casting announcement for Trystane in Season 5 describes him as the "heir to Dorne", even though in the books he has an older brother named Quentyn, and his father's eldest child and heir is actually his daughter Arianne. This may mean that Quentyn has been cut from the TV series.

It still isn't clear if Arianne exists in the TV continuity or not. She is a major character and even a POV narrator in the books. On the other hand, in the books Arianne is furious that her father is treating his son Quentyn as his heir, despite the fact that under Dornish law she should inherit ahead of him. Later she discovers that this is because her father wanted to keep options for a vital marriage-alliance open, but he never thought of this as brushing Arianne aside. In any case, the supplemental Blu-ray material has never stated that Dorne follows equal primogeniture, unlike the rest of the continent. In stray mentions throughout Season 4, when the TV series could have introduced that women have an equal chance of inheriting lordships in Dorne, they avoided it. A "Lord Blackmont" appeared in the Season 4 premiere, when in the books House Blackmont is ruled by a woman. When Oberyn recounts to Tyrion how he traveled to Casterly Rock when Tyrion was a baby, he says that his father took him on the trip - while in the books, it was his mother, the Ruling Princess of Dorne. Indeed, Dorne's equal primogeniture laws are one of its most prominent cultural features, setting it apart from the rest of the continent - as well as directly tying into Myrcella Baratheon's major subplot in Dorne, as Arianne hopes to press the token excuse that under Dornish law, Myrcella would inherit the Iron Throne ahead of her brother Tommen.

A major point standing against an omission of Arianne is that the only dialogue which previously mentioned Trystane (Season 2's "What Is Dead May Never Die") described him as Doran's "youngest son" - indirectly establishing that TV-Trystane isn't an only child, and at the least, that Doran has another son who is older than him, so TV-Trystane cannot be the "heir to Dorne". So either the character description is misworded, or (like Tommen's age) the TV series retconed what was stated in Season 2.

Elio Garcia of Westeros.org suspects that the casting description of Trystane is simply mistaken, pointing out that he was earlier described as Doran's "youngest" son, and also that the casting description said that Tywin had arranged Trystane's betrothal to Myrcella, when it was actually Tyrion who arranged the betrothal (though Tywin subsequently supported Tyrion's action when he heard about it). Elio went so far as to reach out to his contacts at HBO to determine if this was simply a mistake by someone in the HBO PR department, and he did get a response, but it consisted entirely of a terse "no comment". Elio stated his belief that while he is somewhat nervous that there has been no mention of Arianne yet (or the Greyjoy uncles and other Northmen bannermen who appear at this point in the books), the SDCC casting announcement was in no way meant to be comprehensive, and as of yet he sees no specific reason to believe that Arianne has been outright omitted from the TV continuity.[7]

Retrieved from "https://gameofthrones.fandom.com/wiki/Trystane_Martell?oldid=430372"
Community content is available under CC-BY-SA unless otherwise noted.