For his successor as the "Three-Eyed Raven", see "Bran Stark".

Children of the Forest (as a greenseer)

"Cripples, Bastards, and Broken Things" (as a raven in dream-visions)
"The Children" (first true physical appearance)

"You will never walk again...but you will fly!"
―Three-Eyed Raven[src]

The Three-Eyed Raven was the last greenseer, a human living among the last of the Children of the Forest beyond the Wall. His real name is unknown. Under the guise of a three-eyed raven, he appears in Bran Stark's vision-dreams, following his fall and injury, prompting his quest beyond the Wall and guiding him to the cave in which his real human body resides. There, Bran is trained in the magic of Greensight.

After his fall from the tower and awakening from the subsequent coma, the raven appears to Bran Stark multiple times in his dreams. In them, it appears as Bran is about to fire an arrow and causes him to stop before he shoots. Then, the raven lands on the head of a direwolf statue, cries once and then flies deep into the Stark family crypt.[1][2] After having the dream again, he becomes convinced the raven is guiding him to the crypts in order to somehow find his father there, even though he is supposed to be alive and well at King's Landing. Anxious to find out, he asks Osha to take him down to the crypts. There, they are surprised by Rickon, who admits to having had the same dreams. Outside, Osha is still trying to tell Bran that it could be a coincidence when a saddened Maester Luwin appears, holding a letter announcing Eddard's death.[3]

Bran asks Osha about the significance of the Three-Eyed Raven but she does not divulge anything.[4]

While traveling north, Bran dreams once again of the Three-Eyed Raven. In the dream he's able to walk and attempts to shoot at him with a bow and arrow. A strange boy then appears in the dream, and tells Bran that he cannot kill the raven, because Bran is the raven.[6] Another day, this same boy, Jojen, and his sister Meera encounter Bran and his companions in real life, and Jojen explains the prophetic powers of greensight dreams to Bran. Jojen explains that he also saw the Three-Eyed Raven and it was Jojen himself in the dream (not just a prophetic vision of him), as the power of greensight, conferred by the raven, allowed his mind to enter Bran's dreams.[7]

When Bran touches a weirwood in the haunted forests beyond The Wall, he sees flashes of the Three-Eyed Raven from his dreams at Winterfell, flying through the crypts. Among his other vision is a single giant weirwood on a hill, with a voice that whispers, "Look for me... beneath the tree... North!".[8]

Bran and his group eventually reach the giant weirwood tree on the hill, but are attacked by a group of wights hiding beneath the ice. Jojen is fatally stabbed and Meera attempts to save him, but Jojen tells her to leave him for dead. They are helped by a child of the forest, who leads them into a cave. She explains that the wights cannot enter, as the magic that reanimates them has no power there. She then leads them deep into the cave to the Three-Eyed Raven, who is revealed to not be a bird but a very old man whose body is fused to the roots of the weirwood tree. Bran states that he is the Three-Eyed Raven, and the man tells them that he has been many things but is now what they see. Meera begins to tell him that Jojen has died and before she can finish the raven says that Jojen knew what would happen the moment he left, and went anyway. When Meera asks how he knows that, the raven says that he has been watching them for all of their lives with a thousand eyes and one. The raven tells Bran that the hour is late, and Bran replies that he did not want anyone to die for him. The raven states that Jojen died so that Bran could find what he lost. Bran asks if the raven will help him walk again. The raven answers that Bran will never walk again, but he will fly.[9]

The Three-Eyed Raven monitors Bran as he experiences a vision of Winterfell during the childhood of Lyanna and Ned Stark that reveals Hodor's true name, Wylis. He tells Bran that it is time to go, but when Bran expresses a desire to remain in the happy memories, the Three-Eyed Raven pulls him out of the vision. He warns Bran to resist the urge to only view those happy times, and reminds him that as powerful as Greensight is, the past is still the past, and cannot be changed.[10]

The Three-Eyed Raven is with Bran when Bran is viewing the events that occurred at the Tower of Joy at the end of Robert's Rebellion. He identifies young Ned's second-in-command as Howland Reed, Meera's father, and also confirms that Ser Arthur Dayne is a better swordsman than Ned is, explaining to a confused Bran that there is a difference between history and what actually happened.

Bran calls out to his future father in desperation – to his shock, Ned seems to hear him, but dismisses it and continues into the Tower. The Three-Eyed Raven pulls Bran out of the vision, and reprimands him again for trying to interact with the past. The Three-Eyed Raven says he's waited a thousand years for Bran, as the weirwood roots have grown into him. He assures Bran that he [Bran] is not destined to share his fate, but warns that he must learn before he leaves. When Bran demands to know what it is he needs to learn, the Three-Eyed Raven declares, "everything".[11]

Eventually, he and Leaf decide that Bran is ready to learn the truth about the White Walkers. The Three-Eyed Raven accompanies Bran into a vision of the distant past, thousands of years ago, during the war between the Children and the First Men, in which they witness a group of Children led by Leaf approaching a captured man, and magically insert a shard of Dragonglass into his heart, which transforms him into the first of the White Walkers. Awakening, Bran realizes that the White Walkers were created by the Children to use as weapons against his ancestors.[12]

Later, whilst the Three-Eyed Raven and Bran's companions are resting, Bran interacts with one of the weirwood roots, triggering a vision in which he witnesses a large army of wights, idly standing in the frozen wastes of the Land of Always Winter. Wading into their midst, Bran stares incredulously at the creatures, ultimately finding himself standing before the Night King himself, and three of his Lieutenants. Unlike the Wights, however, the Walkers take note of their guest. The Night King meets Bran's gaze, and materializes beside him, seizing his arm. Awakening in terror, the Three-Eyed Raven reveals to him that the Night King has marked him; he knows where he is, and will come for him. The mark likewise neutralizes the magic wards around the cave which bar the Walkers and their minions from entering. The Three-Eyed Raven tells him that he and his companions must leave.

While Meera and Hodor pack their belongings and the children prepare the cave's defenses, the Three-Eyed Raven takes Bran into the past one final time, again to his father's childhood at Winterfell, this time witnessing the young Eddard departing for the Vale, as the castle's citizens look on, including Wylis and Old Nan. Soon, the Night King and his three Lieutenants arrive with an army of Wights to launch their attack on the cave. Though Leaf and the Children attempt to hold them off, their attempts are in vain, as the Walkers and their Wights breach the cave. Still within the vision, the Three-Eyed Raven remains motionless in the roots as the defenders are slaughtered, and Bran, Meera, Hodor, and Leaf make their escape through the back of the cave.

As Bran and Meera escape from the wight, a hooded Benjen Stark comes and rescues them. Meera asks Benjen why he rescued them, and he answers the Three-Eyed Raven requested him. Meera says the Three-Eyed Raven is dead, and Benjen responds "He lives again." It is a possibility, regarding this answer, that 'Three-Eyed Raven' wasn't a name as first assumed, but rather a title used by previous greenseers before the present time.[13] 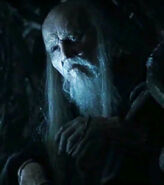 The Three-Eyed Raven in Season 4 portrayed by Struan Rodger - episode "The Children".

The Three-Eyed Raven shows Bran the past in "Home".

"You will never walk again, but you will fly."
―Three-Eyed Raven to Bran Stark[src]

"It is beautiful beneath the sea. But if you stay too long, you'll drown."
―Three-Eyed Raven to Bran Stark on the dangers of Greensight.[src]

"The time has come...leave me!"
―Three-Eyed Raven's last words to Bran Stark[src]

In the A Song of Ice and Fire novels, the bird is a three-eyed crow rather than a raven. The crow is more active in Bran's dreams; it helps him wake from his coma. The crow speaks to Bran, telling him it can teach him how to fly, other times it screeches the words "fly or die".

When Bran finally meets him in the cave beyond the Wall, the three-eyed crow is revealed to be a pale, skeletal man in rotted black clothing in a weirwood throne of tangled roots. His skin is white, aside from a red blotch on his neck and cheek. He has fine, white hair long enough to reach the earthen floor. He is missing one eye, while the other is red. Weirwood roots surround the man and grow through his body, including his leg and his empty eye socket. His voice is slow and dry, as if he had forgotten how to speak. It is also implied that he was once a man of the Night's Watch, due to his tattered black cloak - which means that the "three-eyed crow" name is a double-meaning that was lost when the TV series chose to consistently refer to him as the "Three-Eyed Raven".

Within the books, there are numerous details that indicate who the three-eyed crow was before he entered the cave, but only few of them have made it into the series. The three-eyed crow tells Bran that he has many names, and his birth name is Brynden - hence the theory that he is Brynden "Bloodraven" Rivers, a legitimized bastard son of King Aegon IV Targaryen and former Lord Commander of the Night's Watch who was lost beyond the Wall. Bloodraven lost one of his eyes years before being sent to the Wall, and the three-eyed crow's true form is indeed missing an eye, but in the series the Three-Eyed Raven still has both his eyes (similarly to the show portrayal of Euron Greyjoy). It's not clear if this means that the theory is wrong, or if the writers simply decided not to address his identity.

One of the visions Melisandre sees in the flames is about a "wooden face, corpse white" with a thousand red eyes, accompanied by a boy with a wolf's face; she wonders if this is the enemy. It is speculated by fans that mysterious figure is the three-eyed crow: he has white skin and hair, lives inside a tree, and (according to Leaf) has a thousand eyes and one; the boy is Bran.