"It's time."
―The warg before the Battle of Castle Black[src]

The Thenn warg was a member of the Thenn, a tribe of Free Folk known for their practices of ritual self-scarification and cannibalism.

He is a member of the Thenn, a tribe of Free Folk known for their practices of ritual self-scarification and cannibalism. He is also a warg, capable of entering the minds of animals to see through their eyes and control their actions. He is bound to an owl, allowing him to act as a scout for Styr, the Magnar of Thenn.

Having already scaled the Wall and raided a village in the Gift, the Thenn warg locates Tormund and Ygritte's group through his owl and leads Styr and the rest of his warband to them.[1]

On top of the Wall, the warg's owl spots the signal fire created by Mance Rayder. He tells Styr and Tormund that the time has come to attack Castle Black. The Thenn warg fights alongside his wildling allies during the battle. After killing a black brother, he sees and chases down Samwell Tarly, who shoots him in the head with a crossbow.[2] As Jon enters the chambers where Tormund is being held, Jon mentions that the bodies of the fallen wildlings were going to be burned, and later this warg's body was burned along with the other slain wildlings.[3] 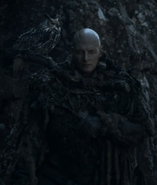 Thenn warg meets with the wildling group led by Tormund in "Two Swords".

In the A Song of Ice and Fire novels, even though there are several skinchangers in Mance Rayder's army (Orell, Varamyr Sixskins, Borroq), there is no mention of one among the Thenn.