Game of Thrones Wiki
Register
Don't have an account?
Sign In
Advertisement
in: Deities, Faith of the Seven, The Seven, Religion
English

This article is about the aspect of the Seven. For the Hound's horse, see: Stranger

"Finally there is the Stranger, rarely prayed to, who represents death."
―Catelyn Stark[src]

The Stranger ​is an aspect of the Seven. It represents death and the unknown. It is rarely prayed to.

Unlike the other aspects which are almost always represented as human figures in artwork, because the Stranger represents the unknown it is often portrayed in a wide variety of forms, often frightening. Sometimes it is represented as a skeletal figure, or a non-human creature possessing various animalistic features. As a humanoid figure, the Stranger is usually depicted in a flowing, cowled robe. Statues of the Stranger inside rooms often face the wall instead of the center as statues of other Gods do.

A statue of the Stranger, facing the wall as per usual, was located in the Great Sept of Baelor in King's Landing, standing opposite the statue of the Maiden. The statue was destroyed when the sept was blown up with wildfire.

A statue of the Stranger in the House of Black and White.

The Stranger, from "The Many-Faced God". 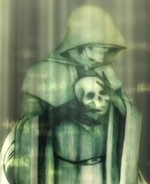 The Stranger from "The Seven-Pointed Star (Histories & Lore)".

A statue of the Stranger in the Great Sept of Baelor

In the A Song of Ice and Fire novels, the Stranger represents death and the unknown. The Stranger is neither male nor female, yet both, ever the outcast, the wanderer from far places, less and more than human, unknown and unknowable. The Stranger's face has also been described as half-human, concealed beneath a hooded mantle.

Worshipers rarely seek favor from the Stranger, but outcasts sometimes associate themselves with this aspect of God.

The all-female monastic order known as the Silent Sisters are responsible for dressing and preparing dead bodies for funerals. As a result they are sometimes referred to as "Wives of the Stranger". They clothe themselves in grey and keep their faces cowled except for their eyes.

The House of Black and White, which is the domain of the Faceless Men in Braavos and a temple dedicated to the Many-Faced God contains a public shrine with idols of many death gods from different religions, including the Stranger.

Sandor Clegane may have named his horse after the Stranger.

While in a nameless village, Catelyn Stark prays in a sept that is modest and has no statues of the Seven, only rough charcoal drawings to represent them. Here the Stranger's face is a black oval, a shadow with stars for eyes. It makes Catelyn uneasy. She thinks to herself that she would get scant comfort there.

Upon entering the sept of Maegor's Holdfast on the eve of the Battle of the Blackwater, Sansa Stark sees that there are even a few candle flames dancing below the Stranger’s half-human face. Sansa visits each of the Seven in turn, lighting a candle at each altar.

Samwell Tarly sang "The song of the Seven" for Gilly's son to sleep. When she asked him why the song only contains six Gods when there are seven, he told her that no one sings for the Stranger; the Stranger's face was the face of death.

When a farmer prays to each of the Seven in turn in Season 4 episode 3 "Breaker of Chains", after he finishes praying to the first six, Sandor interrupts him and quips that they should also pray to the Stranger to beg him not to kill them in their sleep. While Sandor was being a bit crass, this isn't that far from what prayers to the Stranger are essentially like. When Ser Barristan Selmy prays to each of the Seven in turn, when he prays to the Stranger he humbly acknowledges that "You come for all men in the end", but he reverently asks "if it please you spare me and mine today, and gather up the spirits of our foes instead."