The Prince of Winterfell

This article is about the episode. For the title, see: Prince of Winterfell

The Prince of Winterfell

At Winterfell, Theon receives a visitor and holds down the fort. Arya calls in her final debt with Jaqen in a way that displeases him. Robb is betrayed. Tyrion and Varys find common ground. Dany ignores Jorah's advice. Stannis and Davos approach their destination, and Davos is offered a reward.

Ygritte brings Jon Snow before the Lord of Bones, who orders him executed, because he has already captured Qhorin and doesn't need two "crows" for questioning. Ygritte convinces him to spare Jon because of his Stark blood. Qhorin initiates a plan to install Jon as a spy within the wildling ranks.

Grenn and Samwell Tarly discover a cache of dragonglass weapons at the Fist of the First Men. Jon's absence has been noted, but Sam refuses to believe that he is dead.

Ser Jorah Mormont advises Daenerys Targaryen to leave her dragons and flee Qarth, as he has recently booked passage to Astapor. She insists on attempting to reclaim them and asks Ser Jorah to lead her to the House of the Undying, without knowing what lies in wait.

Yara Greyjoy arrives at Winterfell with a small band of men, but instead of bringing reinforcements she offers Theon only advice. Winterfell is too far from the sea, they can't successfully defend it with so few soldiers, and the North is rising against him. She implores Theon to abandon the castle and return home with her, but he refuses to give up his prize. Dagmer tells Theon that after killing the orphans, he also murdered the farmer and his wife.

Luwin spots Osha sneaking into the catacombs. He follows her inside, and she explains that after reaching the farm she doubled back, using a stream to mask their scent from the hounds. Luwin urges her not to tell Bran and Rickon about the children Theon had murdered, but Bran is sitting up behind a corner and listening to them.

Stannis Baratheon's fleet is closing in on King's Landing. Stannis tells Davos that he admires him and offers him the Hand of the King role once he takes the throne.

Tyrion Lannister scours history books seeking inspiration for his plans to defend the city. He takes advice from Bronn and Varys and implies that he has decided to make use of the stocks of wildfire. King Joffrey Baratheon is full of bravado, but his mother is worried about letting him fight. She tries to ensure his safety by kidnapping the prostitute Ros, believing that she is Tyrion's lover, to hold as collateral. Tyrion hides his relief that Shae is safe and ardently vows revenge against his sister.

Lord Tywin Lannister is torn between needing to defend King's Landing and wanting to drive King Robb Stark from the Westerlands. His brother Kevan warns that Stannis will execute Cersei and Joffrey after capturing the capital. Tywin decides to march west, leaving Arya Stark at Harrenhal to serve his castellan, Ser Gregor Clegane. Realizing that she has missed her chance to kill Tywin, Arya pressures the assassin Jaqen H'ghar into aiding her escape from Harrenhal. She forces him to help her by giving him his own name as the third death he promised. She will only revoke his name when he agrees to break her and her friends out of the fortress. Arya, Hot Pie, and Gendry walk through the gates at midnight, as Jaqen instructed. They escape Harrenhal, realizing that the guards have been killed.

Robb is furious when he learns that his mother has freed his most important captive. He tells her that she has betrayed him and orders her kept under guard. Catelyn has sent Brienne to escort Jaime to King's Landing to exchange him for her daughters. Brienne uses a canoe to evade pursuit. Robb plans to relieve Winterfell by turning Theon's men against him with an offer of mercy, issuing his orders to the bastard of the Dreadfort through Roose Bolton. Robb seeks solace in the arms of Talisa, ignoring his betrothal to House Frey.

Main article: The Prince of Winterfell/Recap

Main article: The Prince of Winterfell/Appearances

"The Prince of Winterfell" - Preview

"The Prince of Winterfell" - Recap

"The Prince of Winterfell" - Inside the Episode

Played for a Fool

Ygritte in "The Prince of Winterfell." 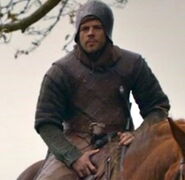 Yara Greyjoy: "Which one gave you the tougher fight, the cripple or the six-year-old?"

Cersei Lannister: "Do you know why Varys is so dangerous?"
Tyrion Lannister: "Because he has thousands of spies in his employ? Because he knows everything we do before we do it?"
Cersei: "Because he doesn't have a cock."
Tyrion: "Neither do you."
Cersei: "Perhaps I'm dangerous, too. You, on the other hand, are as big a fool as every other man. That little worm between your legs does half your thinking for you."
Tyrion: "It's not that little."


Tyrion: "I will hurt you for this. A day will come when you think you are safe and happy, and your joy will turn to ashes in your mouth... and you will know the debt is paid."


Joffrey Baratheon: "They say Stannis never smiles. I'll give him a red smile, from ear to ear."


Dagmer: "What's this?"
Theon Greyjoy: "Gold...for the farmer. For his...trouble."
Dagmer: "His troubles are done. He's feeding the crops now. His wife too. You want to keep a man silent, you silence him."


Osha: "Who was that out there...hung from the gates?"
Luwin: "Must have been the farmer's boys."
Osha: "He killed them and burned them....and passed them off as the little lords?"
Luwin: "Shh, shh, shh. They mustn't know. Bran would blame himself."
Osha: "They'll never hear it from me. The little lads have suffered enough."

Main article: Differences between books and TV series/Game of Thrones: Season 2#The Prince of Winterfell