This article is about the episode. For the Dothraki afterlife, see: Night Lands

In the wake of a bloody purge in the capital, Tyrion chastens Cersei for alienating the king's subjects. On the road north, Arya shares a secret with a Night's Watch recruit named Gendry. With supplies dwindling, one of Dany's scouts returns with news of their position. After nine years as a Stark ward, Theon Greyjoy reunites with his father Balon and sister Yara, who want to restore the ancient Kingdom of the Iron Islands. Davos enlists Salladhor Saan, a pirate, to join forces with Stannis and Melisandre for a naval invasion of King's Landing.

In the Riverlands, Arya Stark continues to pose as a boy while traveling north with Yoren and his Night's Watch recruits. She urinates privately to conceal that she is a girl. Arya is drawn to the caged prisoners containing Jaqen H'ghar, Rorge and Biter. Jaqen asks her for water and introduces himself. A pair of Gold Cloaks approach the party and Arya hides, believing that they have come for her. They deliver a warrant for Gendry, one of Robert Baratheon's bastard children, but Yoren intimidates them into leaving empty-handed. They promise to return with more men.

Arya asks Gendry why he is wanted and he admits that he does not know. He tells her that he was questioned by Lord Jon Arryn and Lord Eddard Stark in the months before he fled King's Landing. He questions why she thought that they had come for her and tells her that he has seen through her disguise. Arya reveals her identity to him and swears him to secrecy.

In King's Landing, Varys discovers Shae living with Tyrion Lannister in the Tower of the Hand and makes implied threats about revealing her presence. Tyrion warns Varys not to underestimate him. Alton Lannister delivers King Robb Stark's peace terms to the small council and Queen Regent Cersei Lannister rejects them. Grand Maester Pycelle relays a message from the Night's Watch requesting manpower and warning of wights. Tyrion is the only one to take the warning seriously.

Ros struggles to continue her work as a prostitute after having witnessed the murder of Mhaegen's infant daughter Barra, one of Robert Baratheon's bastard children. Petyr Baelish threatens her with a tale about selling an unhappy girl to a depraved customer in order to recoup his investment. He orders her to return happy after a night off.

Tyrion has dinner with Lord Janos Slynt and questions him about the massacre of the royal bastards. Janos freely admits his involvement but will not reveal who ordered the attack. Tyrion has Janos arrested and exiled to the Night's Watch and installs Bronn as Commander of the City Watch in his place. Cersei confronts Tyrion about his actions. He warns that she is losing the support of the people but she claims that she does not care. He concludes that Joffrey ordered the massacre, having initially suspected that it was Cersei. He jokes about her relationship with Jaime and she says that he has always been funny. She ends the discussion with the barb that his finest joke was killing their mother when he was born.

On Dragonstone, Davos recruits the Lysene sellsail Salladhor Saan and his fleet of thirty ships to King Stannis Baratheon's cause. His son Matthos Seaworth encourages him to learn to read so that he can study the holy texts of the Lord of Light but Davos is happy to put his faith solely in Stannis. Melisandre seduces Stannis with the promise of a son. At first, Stannis hesitates, explaining he has a wife, but Melisandre still manages to successfully seduce Stannis.

On the Iron Islands

Theon Greyjoy travels to the Iron Islands on a merchant ship and has sex with the Captain's daughter. He tells her that he is expecting a warm reception and is crushed when there is no one to meet him when he disembarks in Lordsport. A woman offers him a ride to Pyke and he attempts to seduce her throughout the journey. He is further disappointed when his father Balon questions his loyalty and his memory of his roots having spent nine years as a ward of House Stark. He delivers Robb Stark's letter suggesting an alliance against House Lannister, for which Robb will make Balon King of the Iron Islands again. His guide enters and he is shocked to realize that she is his sister Yara when Balon greets her warmly. Balon rejects the proposal and compares Theon unfavorably to his sister. He insists that he will follow the ironborn tradition of paying the iron price (meaning to take something through force) and says that no one will give him his crown. When Theon warns his father that he will not defeat the Lannisters, Balon retorts that he has no intention of fighting the Lannisters.

In the Red Waste

Daenerys Targaryen and her khalasar lie exhausted in the heat, their water dwindling as they wait for the return of her bloodriders. Rakharo's horse returns riderless and Ser Jorah Mormont discovers his head and severed braid in its saddle bag. He surmises that Rakharo was caught and killed by a rival khalasar. Irri is devastated by the death and believes the mutilation will prevent Rakharo from entering the Night Lands, the Dothraki land of the dead. Daenerys promises to hold a funeral for Rakharo.

Samwell Tarly rescues one of Craster's wives, Gilly, from Ghost when he bothers her for food. She confides her desire to flee from the keep because of her fear for what Craster will do if her unborn child is a boy. Sam takes her to Jon and she begs him to take her with them on the ranging but will not say what she is afraid of. Jon tells Gilly it is not possible for her to come with them because they are going deeper into wildling country. After Gilly leaves, Sam and Jon argue about the impracticality of taking Gilly with them.

Jon notices Craster taking a baby into the woods at night. He follows him and sees him leave the child to the White Walkers. Jon goes to the child but before he can intervene, Craster surprises him and knocks him out.

...House Greyjoy Lord of the...
...years ago our houses fought as enemies...
...unite them against a greator foe. Your son has proven himself a formidable warrior and...
friend of House Stark. Give him command of your fleet to crush the Lannisters and I will give you...
independence you sought some nine years ago...
shall be king of the Iron Islands as I am King...
North, free of the oppression of the [Iron Throne].
The Lannisters have left their...
...[Casterly Roc]k largely undefended and...
Theon speaks for....[2]

"The Night Lands" - Inside the Episode

Ruled by the Sea 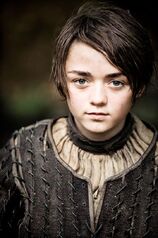 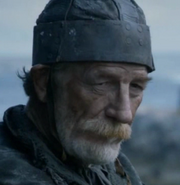 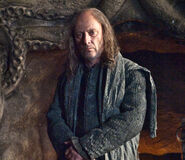 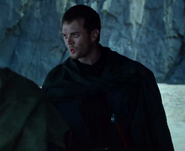 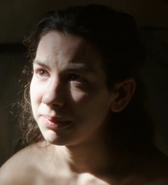 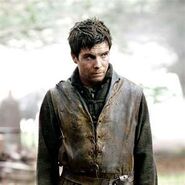 Tyrion Lannister: "I don't like threats."
Varys: "Who threatened you?"
Tyrion Lannister: "I am not Ned Stark, I understand the way this game is played."
Varys: "Ned Stark was a man of honor."
Tyrion: "And I am not, threaten me again and I will have you thrown into the sea."
Varys: "You might be disappointed in the results. The storms come and go, the big fish eat the little fish and I keep on paddling. Come my lord, we shouldn't keep the queen waiting."

Janos Slynt: "The man was a traitor. He tried to buy my loyalty."


Tyrion: "The fool. He had no idea you were already bought."
Janos: "Are you drunk? I won't have my honor questioned by an imp!"
Tyrion: "I'm not questioning your honor, Lord Janos. I'm denying its existence."
Janos: "If you think I'll stand here and take this from you, dwarf...!”
Tyrion: "'Dwarf?' You should have stopped at 'imp'. And yes, you will stand here and take it from me, unless you'd like to take it from my friend here. I intend to serve as Hand of the King until my father returns from the war. And seeing as you betrayed the last Hand of the King, well, I just wouldn't feel safe with you lurking about."
Janos: "What are you...my friends at court will not allow this! The Queen herself..."
Tyrion: "The Queen Regent! And you're a fool to believe she is your friend."
Janos: "We shall hear what Joffrey has to say about this!"
Tyrion: "No, we shan't. There's a ship leaving for Eastwatch-by-the-Sea tonight. From there, it's rather a long walk to Castle Black. I hope you enjoy the Wall. I found it surprisingly beautiful...in a brutal, horribly uncomfortable sort of way."

Tyrion: "If I told you to murder an infant girl, say still at her mother's breast, would you do it, without question?"

Theon Greyjoy: "The sea is in my blood."


Yara Greyjoy: "Your blood will be in the sea if I don't watch where I'm going."

Balon Greyjoy: "Nine years, is it? They took a frightened boy. What have they give back?"

Balon: "My fears have come true...the Starks have made you theirs."


Theon: "My blood is salt and iron."
Balon: "Yet the Stark boy sends you to me like a trained raven clutching his message."
Theon: "The offer he makes is one I proposed."
Balon: "He heeds your counsel?"
Theon: "I've lived with him, hunted with him, fought at his side. He thinks of me as a brother."
Balon: "No, not here, not in my hearing. You will not name him brother, this son of the man who put your true brothers to the sword. Or have you forgotten your own blood?"
Theon: "I forget nothing. I remember my brothers. And I remember when my father was a king."

Balon: "No man gives me a crown. I pay the Iron price. I will take my crown, for that is who I am. That is who we have always been."


Cersei Lannister: "You want to be Hand of the King? You want to rule? This is what ruling is; lying on a bed of weeds, ripping them out by the root, one by one, before they strangle you in your sleep!"


Tyrion: "I'm no king, but I think there's more to ruling than that."
Cersei: "I don't care what you think! You've never taken it seriously; you haven't, Jaime hasn't! It's all fallen on me."
Tyrion: "As has Jaime repeatedly, according to Stannis Baratheon."
Cersei: "You're funny. You've always been funny, but none of your jokes will ever match the first one, will they? Do you remember, back when you ripped my mother open on your way out of her and she bled to death?"
Tyrion: "She was my mother, too."
Cersei: "Mother gone, for the sake of you. There's no bigger joke in the world than that."

Salladhor Saan: "Cersei. I want her. I'll sail with your fleet, all 30 of my ships, and if we don't drown at the bottom of Blackwater Bay, I'll fuck this blond queen and I'll fuck her well."


Matthos Seaworth: "This war isn't about you. We're not attacking King's Landing so that you can rape the Queen!"
Salladhor: "I'm not going to rape her, I'm going to fuck her."
Matthos: "As if she would just let you."
Salladhor: "You don't know how persuasive I am. I never tried to fuck you."