"The House of Black and White"

"There is nothing in the North but ice, and war, and pirates."
―Ternesio Terys to Arya Stark[src]

Ternesio Terys is the captain of the Titan's Daughter, a trading galleon from Braavos.

Ternesio Terys is the captain of the Titan's Daughter, a trading galleon from Braavos.

Arya Stark approaches Terys at a small port in Saltpans and asks him if he'll give her passage to the Wall. She is willing to pay or scrub the floors of the ship in return. He tries to dissuade her from visiting the North, opining that it is a land of "ice, war and pirates". Besides, he says his ship is actually bound for his home, Braavos. Arya remembers the iron coin and the instructions that Jaqen H'ghar had given her following her escape from Harrenhal, and shows the coin to him, whispering "Valar Morghulis". Terys, astounded, responds with "Valar Dohaeris" and promises her a cabin.[1]

After a long sea voyage, Ternesio and Arya Stark arrive at the city of Braavos. She is awestrack by the Titan, so he tells her that, in the old times, whenever Braavos stood in danger, the Titan would wake and protect the city. Arya replies it's just a statue, and just then the Titan lets out a loud blast announcing their arrival, startling her, so the captain laughs. Terys personally brings Arya to the House of Black and White, where he claims she may find the man she seeks. Arya thanks Terys for bringing her this far and he responds that any man of Braavos would have done the same. They say their goodbyes, and he rows away.[2] 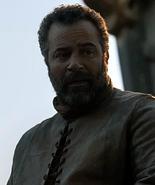 In the A Song of Ice and Fire novels, Ternesio Terys is also the captain of the Titan's Daughter. He keeps his grey hair cut short and neat and has a square windburnt face. He is the father of Denyo and Yorko Terys.