Game of Thrones Wiki
Register
Don't have an account?
Sign In
Advertisement
in: Crimes, Culture and society
English

A rebellion is an organized uprising against a sovereign or liege, with the goal of overthrowing the established authority. Some rebellions are fought to seize control of a throne, or to gain independence.

In the Seven Kingdoms, it is considered a serious crime and an act of treason and oathbreaking.

"When Aerys Targaryen sat on the Iron Throne, your father was a rebel and a traitor."
―Cersei to Joffrey, regarding King Robert[src]

Theon Greyjoy: "We were outnumbered ten to one."
Tyrion Lannister: "A stupid rebellion then. I suppose your father realized that when your brothers died in battle."
— Theon defends his father's failed rebellion.[src]

"Now, I have seven kingdoms to look after and three of them are in open rebellion."
―Tywin Lannister[src]

"A Stark granted a keep and land to his younger son, Karlon, in return for putting down a rebellion."
―Jon Snow[src]

"Your rebellion is over. You can swear your allegiance to me now, or you can die."
―Doran Martell to Ellaria Sand.[src]

"I rebelled against the crown to arrange your marriage to Sansa Stark."
―Roose Bolton to Ramsay Bolton[src]

"It's also fair to point out that I'm the rightful Queen of the Seven Kingdoms. By declaring yourself king of the northernmost kingdom, you are in open rebellion."
―Daenerys Targaryen accuses Jon Snow of rebellion, unaware of his actual parentage.[src] 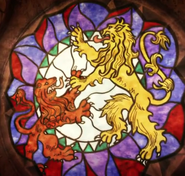 Part of the title sequence depicting Robert's Rebellion against House Targaryen and the Mad King.

Balon Greyjoy bends the knee to King Robert Baratheon, signalling the end of his rebellion.