"First of His Name"

"First of His Name"

"Run fast, Piggy! And sleep well! I'll be cutting your throat one of these nights!"
―Rast to Samwell Tarly[src]

Rast was forced to join the Night's Watch after being arrested for rape. He chose to take the black over the alternate punishment, castration.

Rast and another new forced recruit join Benjen Stark and Tyrion's party as it travels to the Wall, escorted by Night's Watch recruiter Yoren. Tyrion talks to Jon Snow about them being rapers, and how Jon had expected the Night's Watch to be made of honorable men, like his uncle Benjen.[1] Jon beats Rast and two other recruits, Grenn and Pypar, in the training yard at Castle Black, leading to Rast, Grenn, and Pypar threatening Jon in the armory. He, along with the other two, is encouraged to leave by Tyrion. Jon later begins training the Night's Watch recruits in the art of combat, earning Pypar and Grenn's respect, but not Rast's.[2]

Rast is happy to fulfil Ser Alliser Thorne's commands to humiliate Sam on his arrival at Castle Black. Jon convinces Pypar and Grenn to go easy on Sam, but Rast refuses to go along. He says if Ser Alliser puts him up to fight Ser Piggy, he will slice himself off a side of bacon. It resulted with Jon, Grenn, and Pyp pinning him down as Rast wakes up with Ghost sitting on his chest with teeth bared, while Jon reminds him that they know where he sleeps and threatening him that no one touches Sam. Afterwards, he refuses to beat Sam, despite Ser Alliser's commands.[3] Rast is assigned to serve in the rangers.[4][5]

He is later present with Jon, Sam, Grenn, and Pyp at the burning of a wight, and shows signs of worry when Sam wonders whether or not the Wall will be enough to stop the White Walkers should they awaken from their slumber. Later on, Jon comes into the dining hall having just been given Longclaw by Jeor Mormont. All of the recruits are excited and asking to see it, chanting the word "sword", but Rast watches from the back table with a look of envy.[6] He takes part in Mormont's Great Ranging beyond the Wall.[7]

Rast survives the White Walkers' attack on the Fist of the First Men, and regroups with the remaining survivors as the ranging attempts to pull back to the Wall.[8] As the Night's Watch survivors march back south, Rast taunts an exhausted and demoralized Sam, causing him to collapse. Rast attempts to persuade Grenn and Edd to leave Sam behind lest they all die. Angry at being held back by them, Mormont commands Sam not to die and Rast to keep him alive, under penalty of death. Rast grudgingly accepts, unprepared to die for Sam.[9]

After reaching Craster's Keep, Rast urges Grenn and Edd that they are not safe here, and that Craster is not to be trusted. Following the funeral of their brother Bannen, Rast is visibly angered and blames Bannen's death on Craster starving him. Inside the Keep, tensions are starting to run high among the Watch, as Craster starts berating them. When Craster openly suggests that they should kill their wounded or simply let them be killed by Craster himself, an aggravated Karl Tanner steps forward stating that they're being fed with nothing but bread cut with sawdust, and demands to know where he keeps his hidden larder. Rast joins in on the accusations calling him a "stingy bastard". Enraged, Craster picks up an axe and threatens to chop the hands off the next man to call him a "bastard". Mormont grabs Rast by the shoulder to lead him out the doorway, when Karl challenges Craster by calling him a "daughter-fucking, wildling bastard". Drunk and enraged, Craster leaps towards Karl with his axe. Karl manages to grab Craster's axe with his left arm before Craster manages to swing it. Karl then uses his right arm to shove a dagger up Craster's throat, killing him. Mormont bellows that the gods will curse them for this as Karl just broke one of the most the ancient and sacred traditions in all of the Seven Kingdoms, the guest right, but Karl ignores this and reminds Mormont they are not in the Seven Kingdoms. When Karl proceeds to threaten one of Craster's daughters, Mormont draws his sword and threatens to have Karl executed.

Karl releases the girl but suddenly Rast literally stabs Mormont in the back, making him drop his sword. Grenn tackles Karl and a mutiny begins. Mortally wounded but alive, the enraged Mormont lifts Rast off the ground with his bare right hand. He hurls him up towards a wall, nearly succeeding in choking him to death before he starts to choke on his own blood. As Mormont falls to the ground, Rast catches his breath before picking up a knife and repeatedly starts stabbing Mormont until he is dead. As Sam runs away with Gilly, Rast shouts that he may run for now but that he will eventually find him and cut his throat.[10]

Rast is still with the entrenched Betrayers at Craster's Keep but even though he helped Karl earlier by killing Mormont, Karl shows Rast no gratitude or respect and is verbally abusive toward him. Karl orders him to "feed the beast". Rast proposes they should just kill the direwolf, angering Karl because he is not following orders. At the same time, one of Craster's wives enters with Craster's last son, insisting the infant must be given as a "gift to the gods". On Karl's order, Rast leaves the infant on a patch of open ground, then deals with the beast - Ghost, who the mutineers have caged, and whom Rast taunts by withholding food and water. Suddenly, a snowstorm whips up and the temperature drops, causing the water Rast was taunting Ghost with to freeze. Recognizing the approach of White Walkers, Rast flees.

Later, when Summer falls into a trap set by the mutineers, Bran and his companions are taken captive by the mutineers. Rast joins his fellow mutineers in tormenting Hodor and stabs him in the leg with a spear, but chastises him for not fighting back despite his immense size. Bran reveals his identity to Karl when he threatens Meera and Jojen. Knowing Jon Snow, Rast confirms that Bran is his brother.[11]

​When Jon and his allies attack Craster's Keep, it is Rast who alerts Karl of their arrival. However, Rast flees from the raid and is later killed by Ghost, who has been freed from his cage.[12]

Rast is a former raper who was offered the choice between joining the Night's Watch or facing castration, choosing the former. True to this criminal nature of his, he mercilessly preys those weaker than him, but often finds himself crumbling before those who could overpower and kill him. When Jon trains his fellow recruits in swordsmanship, Rast jumps at the opportunity to bully the overweight and defenseless Samwell Tarly on Alliser Thorne's orders, stopping only when he is threatened by Jon, Grenn and Pyp with dire consequences if he touches Sam again.

Despite these traits, Rast is not without scruples, and tries to form genuine friendships with like-minded individuals. Even though he has contempt for Sam for his cowardice and for surviving the Battle at the Fist of the First Men when braver rangers fought and died, he tries to become friends with Sam's friends Grenn and Dolorous Edd. He likes Grenn and Edd enough to urge them to leave the exhausted Sam behind since he thinks they will all die of hypothermia if they do not but does not go on ahead of them even though he has the chance. After his fellow ranger Bannen dies of starvation at Craster's Keep, he angrily stands up to Craster for gorging himself on food they brought him and not sharing with them. The Lord Commander's continued insistence that they honor guest right eventually leads to Rast stabbing him in the back.

Unfortunately for Rast, the fellow mutineers who shared his ideals had no interest in being friends with him. While he still got to abuse Craster's daughter-wives and Hodor, he was little more than a servant in the new hierarchy he found himself in. He was forced to follow the orders of the more dangerous Karl under threat of death. As the Raid on Craster's Keep turned in favor of the loyalists, Rast tried to flee only to be mauled by Ghost. Ultimately, he was a cruel bully and coward right to the very end.

Night's Watch recruits rest on the road with Tyrion Lannister in "Kingsroad". 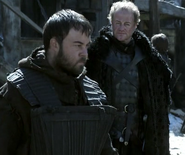 The living remains of the Night's Watch after the fight with Wights and White Walkers, in "Valar Dohaeris".

"If I was your size, I'd be king of the fucking world."
―Rast to Hodor[src]

"You are in love, Lord Snow. You girls can do as you please. But if Thorne puts me up against Lady Piggy, I'm gonna slice me off a side of bacon."
―Rast to Jon Snow[src]

Rast: "He's sitting there, drinking our wine and eating his fill while we die!"
Craster: "I gave you crows enough. I've got to feed my women!"
Rast: "So you admit you've got a hidden larder then? How else would you make it through winter?"
— Rast confronts Craster.[src]

"You're a stingy bastard!"
―Rast to Craster[src]

"You look like a fuckin' ballsack. Ugly looking stupid cunt-face. I could piss in any gutter and soak five of you. "
―Karl Tanner to Rast[src]

In the A Song of Ice and Fire novels, Rast was sent to the Wall after being accused of rape. He chose to take the black rather than face execution. While being trained as a ranger, he becomes an acquaintance of Jon and Sam. In contrast to the TV series, Rast doesn't take part in the Great Ranging beyond the Wall. While the books mention that Rast and the group of rapers he was sent to the Wall with came from the Fingers region of the Vale of Arryn, the show apparently showcases him as a northman.

In the books, it is not Rast but Ollo Lophand who stabs Mormont in the stomach when the mutiny breaks out.

When Jon returns to Castle Black, Rast and several more of the defenders think that he is a turncloak. While some of them just turn away from Jon, Rast gives him an occasional nasty look. During the battle, the wildlings mount the stair and push back the defenders, killing some of them. Rast is among the casualties: he is killed when a Thenn drives a spear into his stomach.