Game of Thrones Wiki
Register
Don't have an account?
Sign In
Advertisement
in: Smallfolk, Stewards of the Night's Watch, Rivermen,
and 2 more
English

View source
watch 02:07
Spider-Man: No Way Home Trailer Dropped - The Loop
Do you like this video?
Play Sound

"The Watchers on the Wall" (alive)
"The Children" (corpse)

"Kill the Boy"
"A Knight of the Seven
Kingdoms"

"I've never thrown a spear before, I've never held a sword with a proper edge, this is no place for me to be."
―Pypar[src]

Pypar, commonly called Pyp, was a steward in the Night's Watch and a friend to Jon Snow, Grenn, Eddison Tollett, and Samwell Tarly.

Pypar was sent to the Wall for refusing to grant sexual favors to a lord at Acorn Hall while working as a singer. The lord, who was angered, accused Pypar of stealing silverware and he was then arrested and sentenced join the Night's Watch, eventually arriving to Castle Black. Embarrassed, Pypar usually lies and tells people that the reason he was arrested was for stealing a wheel of cheese to feed his sister, who had not eaten for three days (it isn't clear if he really even has a sister).[1]

Pypar, along with Grenn and Rast, is beaten bloody by Jon Snow in the training yard at Castle Black. They later threaten Jon in the armory, but are dissuaded by Tyrion Lannister. Tyrion contrasts Pypar's background as a starving peasant to Jon's privileged upbringing in a warm castle with a master-at-arms eager to teach him in the art of combat. This encourages Jon to start training the others in swordplay, earning their respect.[2]

Pypar and Grenn have become firm friends, with Pypar teasing Grenn about his slow wits. When Samwell joins the recruits and is beaten, Pypar holds Jon back as he attempts to interfere. He goes along with Jon Snow's plan to 'go easy' on the new recruit, annoying their Master-at-Arms Ser Alliser Thorne.[3]

Pypar, Jon and Samwell are assigned to the stewards while Grenn is assigned to the rangers. Jon is upset that he has not gotten his desired appointment to the rangers. Pypar is annoyed by Jon's sense of entitlement and awkwardly tells Jon and Samwell that he was really sent to the Wall when as a singer at a nobleman's hall he refused to grant sexual favors to a noble lord. He didn't want to tell strangers the real reason. Samwell asks Pypar, who has a good singing voice, for a song, but Pypar is too embarrassed by his confession and walks off.[4]

Pypar and Grenn are among the men who witness the arrival of the bodies of Othor and Jafer Flowers to Castle Black.[5]

The dead men return as wights and Jon saves the Lord Commander from one of them. He is rewarded with the sword Longclaw and Grenn, Pypar and the others pass the sword around in the dining hall.[6]

Grenn, Pypar and Sam ride after Jon when he abandons his post at Castle Black following the death of his father. They convince him to return by reciting their oaths.[7]

Pyp remains at Castle Black while his friends are Beyond the Wall on Lord Commander Jeor Mormont's great ranging.

Pyp is present when Jon Snow returns to Castle Black after escaping from the wildlings he had attempted to spy upon and being shot with arrows by his lover, Ygritte. At first, he doesn't think Jon can recognize him and Sam due to his injuries. However, Jon stares at both of them and says their names with relief before being carried inside.[8]

Pyp and other members of the Night's Watch receive news from a boy name Olly about how his entire village was massacred by a wildling raiding party from the south. The meeting is interrupted by a single horn blast, which is revealed to be the return of Grenn and Edd, who have managed to escape the chaos that occurred at Craster's Keep.[9] Later, Pyp is present in the dining hall when Jon Snow asks for volunteers to deal with the mutineers who are holed up at Craster's Keep.[10]

The news of the wildling attack on Mole's Town reaches Castle Black. Sam is horrified by the news, believing he has sent Gilly and her baby to their deaths. Pyp reminds Sam that he believed that everyone who went with Commander Mormont had died. Despite the odds, Jon, Sam, Grenn, and Edd all made it back to Castle Black alive, surviving both wildlings and wights during the Great Ranging.[11]

As he is preparing for the attack on Castle Black, he starts shaking, and Sam comes over to comfort and empower him to conduct his duties. As Mance Rayder's army attacks Castle Black, Pypar defends the bridge with a crossbow but continually missed killing members of their army before retreating with Sam. Pypar and Sam get to cover, and continue to try to kill the members of Mance Rayder's army. When Pypar successfully kills a wildling, he gushes over this achievement with Sam telling him he has more to do. As he goes to shoot again, Ygritte shoots an arrow at Pyp, mortally wounding him. As Pyp struggles and chokes on his own blood, Sam cradles him before he dies, promising him that Aemon will come.[12]

After the arrival of Stannis Baratheon and his forces, Pypar is among the numerous bodies of fallen black brothers burned in Castle Black's courtyard.[13]

At Winterfell, Sam converses with Jon and Dolorous Edd, reminiscing about their first days as members of the Watch, with Grenn and Pyp.[14] 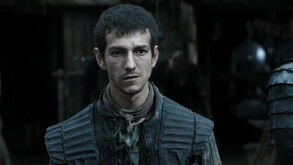 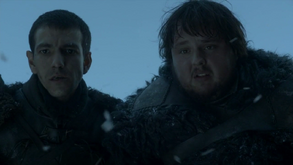 Pyp and Sam welcoming Jon when he arrives at Castle Black in "Mhysa". 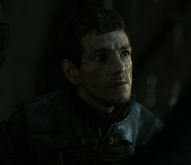 Pyp discusses with Jon, Grenn, Sam and Eddison in "The Mountain and the Viper".

Pyp dying as Sam comforts him during the battle for Castle Black in "The Watchers on the Wall". 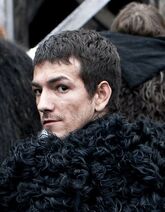 "If you're afraid of a band of wildlings, how in the seven hells did you kill a White Walker?"
―Pypar to Samwell Tarly.[src]

"I've never heard you curse before."
―Pypar to Sam after he roars at him to let Gilly into Castle Black.[src]

Prior to being cast in the role of Gendry, Joe Dempsie had auditioned for Pypar.[15]

In the A Song of Ice and Fire novels, Pyp is an actor who wandered the Seven Kingdoms with a troupe of players. He can imitate other people's voices and boasts that he can identify where in Westeros someone has come from just by their accent. He is named to the rangers. George R.R. Martin has stated that he is a big fan of J.R.R. Tolkien's The Lord of the Rings, in which main character Frodo Baggins's best friend is Samwise Gamgee, called Sam for short. Similarly, Jon Snow's best friend Samwell Tarly (also called "Sam" for short) is also an overweight, not martially skilled everyman character who enjoys reading stories in books. Moreover, Pypar (called Pyp) for short, has a similar name to Frodo's other companion Pippin Took (sometimes shortened to "Pip"). Thus both Jon Snow and Frodo Baggins have two companions named "Sam and Pyp".

While the ranging force travels beyond the Wall, Pyp remains at Castle Black. He takes part in the Battle of Castle Black.

Despite Pyp and Grenn dying in the TV series, so far the two are still alive and well in the books.

In the fifth novel, Jon assigns Pyp to serve at Eastwatch-by-the-Sea.

The show scene where Sam holds Pyp's head in his last moments is maybe based on the book scene in which Sam comforts the fatally-injured Jeor Mormont during the mutiny at Craster's Keep.