Game of Thrones Wiki
Register
Don't have an account?
Sign In
Advertisement
in: Castles, House Greyjoy, Locations in the Iron Islands, Locations
English

This article is about the castle. For the large island, see: Pyke (island)

The Great Keep
The Bloody Keep
the Kitchen Keep

"The last time we provoked them too far, I watched from that window as they breached our walls and knocked down our towers. I lost two brothers that day."
―Yara Greyjoy on Pyke during its siege.[src]

Pyke is the stronghold and seat of House Greyjoy, located on the island of the same name, which is one of the seven major Iron Islands. The castle is the regional capital of the Iron Islands as a whole. Pyke is an ancient stronghold and the cliff it was built on has been eroded by the sea leaving the towers standing on stone stacks. The towers are connected by swaying rope bridges. The rocky moss covered stone at its base is not suitable for ships landing so traffic to the island flows through the nearby harbor town Lordsport.[1][2] It is currently the seat of Yara Greyjoy – the Queen of the Iron Islands.

"Pyke" is also the name given to bastards born on the Iron Islands.

Pyke has been the seat of House Greyjoy for centuries. During the final battle of the Greyjoy Rebellion, Pyke was besieged by the combined forces of the Iron Throne led by King Robert Baratheon and Lord Eddard Stark.[3] The fighting led to the destruction of several of the castle's towers and saw the death of Maron Greyjoy, the second son of King Balon Greyjoy.[4] In the end, Balon bent the knee to King Robert and submitted to the Iron Throne. To assure Balon's cooperation, his youngest son and heir Theon Greyjoy was made a ward of Ned Stark at Winterfell.[5]

As the War of the Five Kings escalates, the King in the North Robb Stark sends Theon Greyjoy to negotiate an alliance with his father Lord Balon Greyjoy to aid the northerners. After landing in Lordsport, Theon is taken to Pyke by his sister Yara Greyjoy, who has disguised herself as a guide. A tense family reunion between Theon and his family takes place within the walls of Pyke. Balon spurns Robb's offer and reveals that he has plans of his own.[2]

Following Theon's return to Pyke, the castle hosted a war council to discuss Lord Balon's plans to conquer the North. With the northern lords preoccupied in the Riverlands, Balon plans to seize the weakly-defended northern lands. During the proceedings, Balon assigns his daughter Yara command of a fleet of thirty ships to attack Deepwood Motte but assigns Theon only one ship to raid fishing villages. Theon tries in vain to convince his father of the merits of allying with King Robb against the Lannisters and the Iron Throne. However, Balon is unmoved and expresses his distrust of Theon, whom he fears has been influenced by the northerners. Seeking to prove himself to his family, Theon renounces his allegiance to the Starks and chooses his family.[6]

King Balon and Yara receive a box and scroll from Ramsay Snow, the bastard son of Roose Bolton; who is the new Warden of the North. The scroll contains a message from Ramsay demanding that the ironborn relinquish their conquests in the North. If this demand is not met, Ramsay threatens to flay every ironborn in the North and to send "pieces" of Theon to his family. The box is found to contain Theon's phallus. Unwilling to surrender his conquests, Balon repudiates Ramsay's terms and rejects Theon as his son and heir; deeming him unworthy to continue the Greyjoy line. Yara however disagrees with her father and assembles a force to rescue Theon.[7]

With the end of the War of the Five Kings, the local Northern Houses have regrouped and retaken many of their strongholds, including Deepwood Motte. News of the fall of Deepwood Motte and the slaughter of its ironborn garrison at the hand of the Glovers reach Pyke. Yara deems the ironborn campaign to conquer the North a doomed cause, and urges her father to settle for peace. She warns of a recurrence of the damage inflicted on Pyke and the loss of her two older brothers during the Greyjoy Rebellion. However, Balon is unmoved by his daughter's pleas, and threatens to remove Yara as his heir if she does not comply with his wishes.[4]

Later that night, Balon encounters a cloaked figure while crossing a rope bridge between two of Pyke's towers. The cloaked figure reveals himself as Euron Greyjoy, Balon's estranged younger brother. Following a heated exchange between the two brothers, Balon attempts to stab Euron. However, his brother instead throws him off the bridge and Balon falls to his death in the sea below. The following morning, Balon's body is found by his daughter Yara and her uncle Aeron Greyjoy, Balon's younger brother and a Drowned Men priest. Following the funeral, Yara announces her intention to sit on the Salt Throne. However, Aeron warns her that the kingsmoot will decide the new ruler of the Iron Islands.[4]

Notable residents of the castle 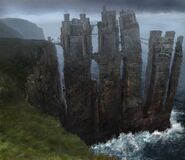 In the A Song of Ice and Fire novel A Clash of Kings, Pyke is an ancient, storm-worn fortress built atop several rocky towers jutting out of the sea. It is connected to the main island by a treacherous-footed rope bridge, and defended by tall walls.

Pyke was long considered impregnable, but during the Greyjoy Rebellion immense siege-ships commanded by Stannis Baratheon smashed the walls down with boulders, allowing ground troops to storm the castle. The onslaught was so severe that the first men through the breach, including Thoros of Myr and Jorah Mormont, suffered relatively few losses and were able to secure a bridgehead within the walls.

It isn't clear how "Pyke" came to be used as the special surname for bastards from the Iron Islands, i.e. before the Targaryen Conquest 300 years ago, the ironborn were ruled by other Houses who weren't from the castle or island of Pyke, such as House Hoare of Orkmont island. They may have used different bastard surnames before the Conquest.

While Balon's death in Pyke is only briefly mentioned in the novels A Storm of Swords and A Feast for Crows, Pyke features in Season Six. Unlike the books, Yara's disagreement with her father's military strategy, Balon's subsequent death, and the recovery of his body are shown onscreen. Whereas A Storm of Swords implies that Euron Greyjoy had hired a Faceless Man to kill Balon, Euron carries out the assassination himself in the TV episode "Home".