Game of Thrones Wiki
Register
Don't have an account?
Sign In
Advertisement
in: Qartheen, Warlocks, The Thirteen, Deceased individuals
English

Burned alive by Drogon, Rhaegal and Viserion on the command of Daenerys Targaryen

"When your dragons were born, our magic was born again."
―Pyat Pree to Daenerys Targaryen[src]

Pyat Pree was a warlock from Qarth and also a member of the Thirteen.

Pyat Pree is one of the warlocks of Qarth, a wise man who claims mystical powers. Together with the rest of his order, he dwells in the mysterious House of the Undying. Even though the power of and respect for the warlocks has considerably waned over years and many dismiss them as little more than charlatans performing parlor tricks and consuming shade of the evening, tradition and custom has allowed Pyat Pree a place among the Thirteen.

Pyat Pree is present when the Thirteen greet Daenerys Targaryen at the gates of Qarth, and she and her people are allowed into the city.[1]

Pyat Pree attends a reception for Daenerys in the gardens of the home of Xaro Xhoan Daxos. He personally welcomes Daenerys Targaryen on behalf of the Warlocks. He gives her a gem and tells her to look into it until she can see herself in its facets. When she looks up, she sees that there are now two of him talking to her. After inviting her to the House of the Undying. Xaro apologizes for the warlock, stating that though they are not thought highly of, it is customary to extend the invitation. Ser Jorah Mormont is warned by the mysterious Quaithe to beware that all men will wish to see the dragons, and in seeing them, will lust after them,[2] which is proven to be true when they are stolen from Xaro's home.[3]

Xaro uses the theft as a pretense to hold a council of the Thirteen in his home. He then stages a coup with the assistance of Pyat Pree and declares himself King of Qarth. The warlock uses his magic to kill the rest of the Thirteen. They reveal that they stole the dragons and have taken them to the House of the Undying. Daenerys flees in terror. Pyat Pree stops her in the entrance hall using another of his duplicates. He tells her to come to the House of the Undying to be reunited with her children. Ser Jorah arrives and stabs him in the back; the body disappears, and only the clothes remain. Another double reappears next to the window, again asking Daenerys why she resists.[4]

When Daenerys travels to the House of the Undying to retrieve her dragons, Pyat Pree creates illusions around her as she travels throughout the House's chambers. When she reaches the room with her dragons, Pyat confronts her, saying that his magic was reborn when the dragons were born, that it is strongest in their presence, and that the dragons are strongest in hers. Using magic, he chains Daenerys, telling her she will stay with him for an eternity to fuel his magic; however, as he does this, he inadvertently provokes the dragons. Upon her saying dracarys, the dragons open fire on him, roasting him alive in seconds.[5]

The warlocks of Qarth attempt revenge on Daenerys by sending a warlock to Astapor to assassinate her. The knight Ser Barristan Selmy saves Daenerys. However, the warlock escapes using magic.[6]

Being one of the warlocks of Qarth, Pyat Pree possessed a number of magical abilities.

Pyat Pree possessed the ability to magically duplicate himself, as shown when he impressed Daenerys with this skill upon her arrival in Qarth, and also when he assassinated eleven of the Thirteen by duplicating himself.

Pyat Pree had the ability to teleport from one location to another, as shown when he escaped Daenerys and her men after slaying eleven members of the thirteen by disappearing into thin air.

Pyat Pree could create magical illusions to entice people, as shown when he cast several illusions upon Daenerys when she was exploring the chambers of the House of the Undying.

He had the ability to conjure physical objects out of thin air, as shown when he conjured chains to bound Daenerys in the House of the Undying.

Along with the other warlocks of Qarth he was presumably a skilled alchemist, as he regularly drank the shade of the evening which gave his lips their blue color. 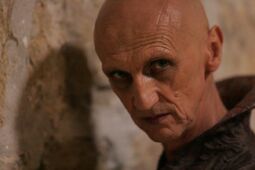 Pyat Pree in "The Ghost of Harrenhal." 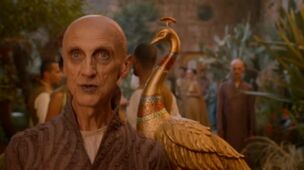 Pyat Pree demonstrating his power in "The Ghost of Harrenhal." 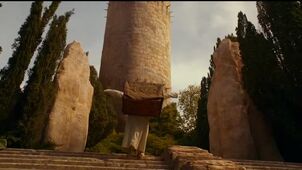 Stolen dragons being carried up to the warlock's House of the Undying. 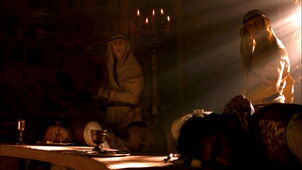 Pyat uses various doubles during his coup of Qarth.

In the A Song of Ice and Fire novels, Pyat Pree is a pale man with blue lips, like most of his order. He, along with Xaro Xhoan Daxos and Quaithe, approach Daenerys Targaryen in the ruined city of Vaes Tolorro (not included in the TV series) and invite her to Qarth (instead of greeting Daenerys at Qarth in the TV show). Later on he invites her to the House of the Undying, and instructs her how to move inside without getting lost.

In the books Pree shows no ability to conjure doubles; he doesn't steal Daenerys' dragons, nor try to imprison her, neither is he killed. He is not a member of the Thirteen.

After Daenerys steps out of the House of the Undying, Pyat Pree is angry at her for burning the palace and injuring his masters, the Undying. He draws a knife and charges at her, but is stopped by Drogon, Jhogo, and Rakharo.

Daenerys soon learns that Pyat Pree is gathering the surviving warlocks together to work ill on her. Thus she has no choice but to leave Qarth urgently.

In A Dance with Dragons, Xaro arrives at Meereen and warns Daenerys that Pyat Pree set out with three of his fellow warlocks to seek for her, in order to pay her back for the destruction of the House of the Undying. Currently Pyat Pree is still after her.

In "The Forsaken" sample chapter of the sixth novel, Aeron Greyjoy is held prisoner at Euron's ship. Several more prisoners are brought to his cell, two of them are warlocks of the east. Their flesh is as white as mushrooms and lips are purplish­-blue. One of those has lost his legs. The mutes hang him from a rafter, and he cries "Pree" repeatedly as he swings; Aeron has no idea what the tortured man means by that word, and thinks it is perhaps the name of the demon that he worships. It is unclear if that warlock is Pyat Pree.