Prendahl na Ghezn was one of the captains of the Second Sons, a mercenary company.

Prendahl na Ghezn is a warrior and mercenary of Ghiscari origin. Alongside Mero, he is one of the captains of the Second Sons.

Along with his co-captain Mero, and their lieutenant Daario Naharis, Prendahl meets Daenerys in her tent outside Yunkai. He rejects Daenerys's offer of breaking the Second Sons' contract with the Wise Masters, and watches as Mero rudely snubs Daenerys's offers.

Prendahl then discusses how to deal with Daenerys with Mero and Daario. To avoid facing her Unsullied, Mero proposes that one of them slips into Daenerys's camp and assassinate her. He gives three different coins - a Meereenese, a Braavosi, and a Volantene - to the bedslave attending them and has her hand them out at random to the three of them, the one with the Braavosi coin being charged with the assassination. Daario winds up with the Braavosi coin.

Later that night, after sneaking into Daenerys's pavilion, Daario presents Prendahl's head, along with that of Mero. He explains that he, Mero and Daario had "philosophical differences" about Daenerys's beauty and forced Daario to kill her, and he refused, and they fought him but lost. He then pledges the Second Sons to Daenerys.[1] 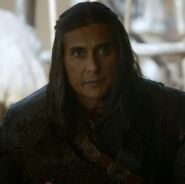 In the A Song of Ice and Fire novels, Prendahl is a sellsword of Ghiscari descent and serves as the commander of the Stormcrows, a noted mercenary company which fights for the highest bidder. Daario Naharis and Sallor the Bald are the other two captains of the company.

Prendahl and Sallor are killed by Daario. Later he sneaks into Daenerys's camp and produces the severed heads of his comrades as proof of his loyalty to her.