Game of Thrones Wiki
Register
Don't have an account?
Sign In
Advertisement
in: Titles, Maesters, Culture and society, Organizations
English

This article is about the scholastic order. For the special feature, see: The Order of the Maesters

"Service as a Maester is a noble calling, one of vital importance to a prosperous realm. It is little wonder there are some who refer to the Order as the Knights of the Mind."
―Maester Luwin[src]

The Order of Maesters, also known as the Maesters of the Citadel, the Knights of the Mind, and most often simply as the Maesters, are an order of intellectuals (scholars, healers, and other learned men) in the Seven Kingdoms.

Focusing on scientific knowledge and disdaining belief in magic, in the present day the Order of Maesters has largely eclipsed the older Alchemists' Guild, which claims to possess arcane magical knowledge, but whose number, power, and abilities have waned over the centuries.

The maesters are a secular organization, not a religious order, though they do swear sacred oaths to follow the duties and restrictions of their office. Unlike certain other organizations such as the Faith of the Seven, which has male and female priests, women are not allowed to join the maesters.

The sigil of the Order is a circular golden chain, made up of twelve square links.

The maesters began as a symposium of scholars and priests in Oldtown during the early reign of the Hightowers. Known then only as "Peremore's pets", they were led by Prince Peremore "the Twisted" Hightower, the physically disabled younger brother of King Urrigon Hightower. After Peremore's death, the king gave these learned men land within the city that would eventually become the Citadel, laying the foundations for the Order of Maesters.[1][2]

Almost every castle and noble family in Westeros, no matter how small, has a maester on hand to teach the lord's children, give him counsel, and attend to medical and educational needs. The lords of the Seven Kingdoms are also reliant on their ability to send long distance communiques using trained messenger ravens, which they are responsible for tending in a castle's rookery. Maesters also serve as the resident medical expert at a castle, responsible for everything from setting broken bones, assisting childbirth, and knowledge of medicinal herbs and potions to aid fevers and internal illnesses. In addition, maesters also observe changes in the weather to watch for shifting of the seasons.[3]

Maesters are expected to eschew their familial background and political allegiances. They drop their family name when they join the order. They are assigned to serve at castles and holdfasts throughout the Seven Kingdoms and are bound by their vows to serve whoever holds the castle in which they reside, regardless of changes in lordship. It is not considered a breach of their vows if a maester advises the current lord of their castle in military matters to defeat their enemies, but if their lord is defeated by his enemies and possession of the castle officially changes hands, the maester is expected to serve his new lord.[3] Luwin, for example, was sworn to serve the Lord of Winterfell, so advised both Bran Stark and Theon Greyjoy.[4][5] Wolkan, who served House Bolton, served House Stark after it retook Winterfell from the Boltons.[6]

Similar to the Night's Watch, the Order of Maesters is an egalitarian institution whose members must ignore their past family and political ties, give up their right to inheritance, and take an oath of celibacy. Thus, like the Night's Watch, younger sons or bastard sons are often made to join the maesters, so as not to interfere with the inheritance of firstborn and/or legitimate sons.

Another similarity is that both the Night's Watch and the maesters are considered to be servants of the realm. It is possible to be both a maester and a member of the Night's Watch, due to the similar restrictions of their vows and because the castles along the Wall each need a maester. This has always been something of a rarity, however, as even during its prime the Night's Watch only maintained nineteen castles along the Wall, and by the time of Robert's Rebellion, the number of manned castles had dwindled over the centuries to only three. Thus in the current era there are usually only three maesters who are also members of the Night's Watch. Most prominent among these is Maester Aemon, who by the outbreak of the War of the Five Kings had served as maester of Castle Black for over seventy years. Should the need arise at the Wall, it is also permissible for a member of the Night's Watch to be trained as a maester at the Citadel, then return to the Wall to serve as the maester of one of its castles.

The headquarters of the Order of Maesters is the Citadel, a complex devoted to higher learning, which is located in the city of Oldtown in the southwest of the Reach. New initiates are trained at the Citadel, and upon finishing their studies, gain the title of "maester" and are assigned to serve at a castle or town in Westeros. The entire order is ruled over by the Conclave, the council of archmaesters, who reside in the Citadel.

Maesters wear a chain around their necks composed of various metals to signify their personal expertise. Maesters personally forge each link themselves. Each link indicates a different field of study. There are sixteen recognized fields each with a different representative metal. Maesters are expected to wear their chains at all times, even when sleeping.[3]

Known metals and corresponding fields of study include:[7]

Known metals with unknown corresponding fields of study include

Maester costume on display at Wondercon 2011. 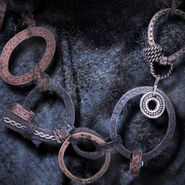 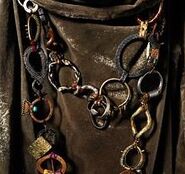 A raven's scroll bearing the sigil of the order.

In the A Song of Ice and Fire novels, the maesters are an all-male order of scholars and teachers (women are not permitted to join the order) that dominate much of the intellectual life in the Seven Kingdoms. They are headquartered at the Citadel in Oldtown, Westeros' second-largest city, on the far southwestern coast of the Reach.

For a long time, many book readers mistakenly pronounced "maester" as "my-stir". However, George R.R. Martin publicly stated at least as early as 1998 that the order's name is correctly pronounced "may-stir", and this pronouncement is used in the Game of Thrones TV series.[10]

A wide range of subjects are studied by the maesters, including herb lore, warcraft, medicine and healing, smithing, economics, history and heraldry, astronomy, ravenry, and the "higher mysteries" (magic), although the latter is largely theotretical and primarily studied to prove that magic never truly existed. The supreme master in each subject gains the rank of Archmaester and is allowed to sit on the ruling council of the order, the Conclave, based in the Citadel.

Maesters in Westeros basically serve many of the functions that Christian monks did in real-life medieval society, being lore-masters and advisors to noble families, who are mostly responsible for promoting literature culture, and who provide many of the writing services with letters or books that real-life Christian monks or clergymen would in a medieval chancery. In the fantasy-world of Westeros, however, the maesters are entirely separate from the religious clergy (such as septons of the Faith of the Seven): maesters focus entirely on matters of learning and scientific knowledge, while clergymen focus on religious matters.

The origin of the Order of Maesters was not revealed in the first five novels of the A Song of Ice and Fire series, but the The World of Ice & Fire sourcebook (2014), written from the perspective of a maester writing a comprehensive history Westeros, shed some light on their history. The Maesters are said to have originated in Oldtown itself, back when that city and its environs constituted a small kingdom of the First Men- long before the Andal Invasion six thousand years ago. Thus they are not an Andal institution brought to Westeros, nor did they predate the First Men migration to Westeros. While their exact origins and development are left murky by thousands of years of history, the Citadel and its Maesters simply originated in similar fashion to real-life universities: a king of Oldtown had a passion for learning, became a great patron of the arts and sciences, and started gathering scholars and healers at his court. Over time he granted them their own land in the city to promote their studies, which became the Citadel. They formed a guild to organize their trade of scholarship (much like a merchants' guild or shipwrights' guild), and over the generations it gradually developed formalized rules, until it developed into the "Order of Maesters" known in later centuries, with its vows of political neutrality (and associated rules of celibacy, dissolving all past family allegiances, and holding no land and title, to reinforce this neutrality). Over the centuries, maesters spread to every major town and castle in the Seven Kingdoms (from Dorne to the North), with each maester officially assigned to his location by the Citadel.

Lady Dustin has a very negative opinion about maesters. She tells Theon "If I were queen, the first thing I would do would be to kill all those grey rats. They scurry everywhere, living on the leavings of the lords, chittering to one another, whispering in the ears of their masters... Out of gratitude we give them a place beneath our roof and make them privy to all our shames and secrets, a part of every council. And before too long, the ruler has become the ruled". She personally resents Maester Walys (a predecessor of Luwin's), whom she claims came to Winterfell to fill Lord Rickard Stark’s ears with poisoned words as sweet as honey, and the Tully marriage was his idea undoubtedly.

According to the TV series official pronunciation guide developed for the cast and crew, the term is pronounced "MAY-ster", not "MY-stir", which proved tricky for the cast during filming.