View source
watch 02:57
Where are Nymeria and the Stark Direwolves?
Do you like this video?
Play Sound

"That's not you."
―Arya Stark after Nymeria refuses to accompany her to Winterfell.[src]

Nymeria is one of six direwolf pups found by the children of House Stark. Nymeria is adopted and raised by Arya Stark. After Nymeria leaves Arya, she becomes the leader of a huge wolf pack in the Riverlands. She and her brother Ghost are now the only living members of the pack.

Arya named her after Nymeria of Dorne, the warrior-queen of the Rhoynar who lived a thousand years ago.

Nymeria is adopted as a pup along with the rest of her siblings when Eddard and his entourage come upon the pups and their deceased mother. At Jon's request, the pups are spared a quick death, and each Stark child adopts one as their own.

Arya trains her to help her pack for the journey south to King's Landing. In front of Jon, Arya demands Nymeria bring her her gloves, but she merely stares at Arya, obviously not understanding. She accompanies her as far as the Inn at the Crossroads.

During a fight between Arya and Joffrey, in which Joffrey knocks Arya down and threatens to gut her, Nymeria protects Arya by biting Joffrey's arm. Arya, fearing for Nymeria's well-being, takes her away and forces her to leave. After the incident, Cersei wants Nymeria dead, even though it was Joffrey who started the fight. However, as she is nowhere to be found, her sister, Lady is killed in her place despite her innocence and the protests of Arya and Sansa.[1]

On the way to Winterfell, when Arya stops to take a rest, she is surrounded by a pack of wolves. One of them turns out to be a direwolf, appearing a lot larger than the others. Arya recognizes Nymeria, who appears to be the leader of the pack. As Arya approaches the direwolf she raised, she tells her that she's going home and asks her to come with her, but Nymeria refuses and leaves along with her pack. Arya realizes that Nymeria has a new life now and is no longer attached to her anymore.[2]

Nymeria in "The Kingsroad" 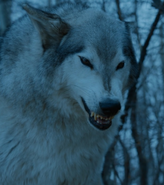 In the A Song of Ice and Fire novels, Nymeria is an exuberant and playful wolf, but is also fiercely defensive of Arya Stark. Arya names her for Nymeria, the warrior-queen of the Rhoynar who led her people to safety in Dorne, a thousand years before the events of the series.

Nymeria's fate is not explicitly revealed in the books, although Arya occasionally dreams about her; also, there are rumors about a huge she-wolf, which is presumably Nymeria.

During the march with Yoren's caravan, Arya overhears a conversation about a huge female wolf (referred to as "a bitch from the seventh hell") that leads a pack around the Gods Eye, and has no fear of men; that wolf allegedly has torn a baby from his mother's arms, and when Lord William Mooton heard that - he and his sons rode out to hunt her, but were forced to retreat, losing their hounds in the process. Arya cannot stop herself from stating aloud it is just a story; Yoren quickly pulls her away, before she attracts unwanted attention. Arya muses sadly that Nymeria probably wouldn’t even recognize her now, and if she did - she’d hate her.

In the third novel, Arya dreams that Nymeria and her pack attack Iggo and three more of the Brave Companions, killing them all. Later, through her warg bond with Nymeria, Arya finds her mother's body in a river. She drags her to the shore and tries to wake her, but flees when she sees horsemen approaching. When Arya wakes up, she realizes that her mother is dead.

While in the House of Black and White, Arya frequently dreams that she is a direwolf leading a pack of grey wolves in the Riverlands.

Septon Meribald tells Brienne about a pack of hundreds of wolves that prowls along the Trident, rumored to be led by a monstrous she-wolf, which brings aurochs down all by herself, that no trap nor snare can hold her, fears neither steel nor fire, slays any wolf that tries to mount her, and devours no other flesh but man. The she-wolf in question is presumably Nymeria, though the rumors are probably exaggerated.

After Brynden Tully escapes from Riverrun, Nymeria helps him indirectly by delaying his pursuers: Jaime sends Ser Addam Marbrand and Ser Dermot of the Rainwood to find Brynden; the next day, Ser Dermot returns and reports that his party was attacked by a pack of hundreds of wolves, led by an enormous female direwolf. The wolves killed two sentries and horses. Hearing that, Jaime wonders if the she-direwolf in question is the same one that mauled Joffrey.

In the fifth novel, Jon sees Nymeria through his warg bond with Ghost, with a hundred small grey wolves of her pack; the pack often preys on sheep, cows and horses, and sometimes human flesh. Arya experiences wolf dreams, in one of them Nymeria and her pack feast on a shepherd, his dogs and flock; other wolves of her pack are afraid of humans, even dead ones, but she is not.

It seems that Arya is not bothered by the fact that Nymeria has become man-eater; perhaps it reflects Arya's own personality, who has recently murdered several people who never did any wrong to her, her family or her friends (among them the old insurance seller).

According to the TV series official pronunciation guide developed for the cast and crew, "Nymeria" is pronounced "Nigh-MEER-ee-uh", as opposed to "Nih-MER-ee-uh".