House of the Dragon

Mysaria is a former prostitute who lives in Westeros. Originally a slave from Essos, she worked her way up the ranks in the criminal underbelly of King's Landing, to become the most trusted ally of Prince Daemon Targaryen.[1] 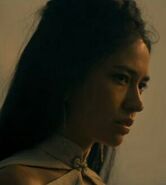 Mysaria in the first teaser trailer

Mysaria with Daemon at Dragonstone

Mysaria was revealed to be a recurring character in House of the Dragon on December 8, 2020. On February 11, 2021, HBO announced that Sonoya Mizuno had signed on for the series. The character breakdown reads as follows:

"She came to Westeros with nothing, sold more times than she can recall, and she could have wilted... but instead she rose to become the most trusted -- and most unlikely -- ally of Prince Daemon Targaryen, the heir to the throne."
―HBO[|[src]]

In the books, Mysaria was originally a slave from Lys in the Free Cities, though her ultimate origin is unclear. She is described as an albino. The TV version in House of the Dragon changed this to make her Asian in appearance - apparently a slave passed along the shipping lanes from Yi Ti in the far east (or perhaps the descendant of slaves).

This particular section contains MAJOR spoilers for House of the Dragon. Anyone wishing to avoid spoilers for the upcoming prequel series should not click [Expand].

In The World of Ice & Fire and Fire & Blood, Mysaria is a dancer from Lys who becomes the lover of Prince Daemon Targaryen.

Mysaria became Daemon's paramour while working in King's Landing, and was allowed to live at Dragonstone. Around 105 AC, she became pregnant with his child. Daemon then gave her a dragon egg, to the anger of King Viserys I Targaryen. On the king's command, Daemon returned the egg and sent Mysaria back to Lys. On the journey back, she lost the child.