A man-at-arms is a common man serving a noble house or lord as a soldier.

Men-at-arms comprise the backbone of any army and the security of whomever they serve. They are normally able-bodied male smallfolk recruited (or conscripted in times of war) from the population. A master-at-arms (usually a knight), trains the soldiers during a time of peace. The roles they take up are broad, usually they're trained to be standard foot soldiers, cavalrymen, or archers. They can also be trained to operate equipment such as trebuchets and ballistae, and can also fill other roles such as scouts, torturers, and executioners.

Between whichever noble house or lord they serve, their arms and armor ultimately vary in both quality and appearance. For example, Stark soldiers don simple steel helmets and wear hauberks and gambesons under a suit of leather brigandine armor, while Lannister soldiers enjoy more protective and ornate segmented plate armor and helmets with cheek guards and collapsible visors. However, neither standard is strictly upheld for either house, as Stark men can be seen without mail or helmets, and more low-ranking Lannister soldiers are seen wearing only a simple red robe and leather cuirasses. Roles between soldiers also tend to be apparent when through their garb as well, such as archers, particularly in the Lannister army, who are often given lighter and less protective armor in comparison to standard foot soldiers. Some houses have also given armor to their soldiers that resemble their house sigils, such as Tyrell soldiers having helms with protrusions resembling blooming petals, and Tully soldiers wear scale armor resembling those of fish.

In comparison to knights, men-at-arms have not taken special vows and are still considered smallfolk. Furthermore, men-at-arms are often not as well trained and equipped as knights, and are thus outranked and led into battle by them. 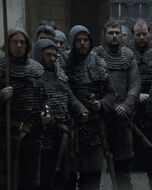 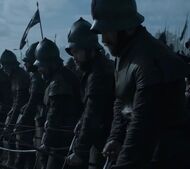 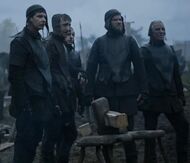 House Tarly
Add a photo to this gallery

Retrieved from "https://gameofthrones.fandom.com/wiki/Man-at-arms?oldid=402718"
Community content is available under CC-BY-SA unless otherwise noted.