Game of Thrones Wiki
Register
Don't have an account?
Sign In
Advertisement
in: Bloodriders, Dothraki, Living individuals,
and 2 more
English

Bloodrider (to Drogo and Daenerys)

"Malakho says the statue is too heavy to carry. Kovarro says that Malakho is an idiot."
―Ser Jorah Mormont interpreting for Daenerys Targaryen[src]

Kovarro is a Dothraki warrior in Khal Drogo's khalasar. He is not seen in the first season, but has been guarding Drogo's wife Daenerys Targaryen since their marriage. Drogo is wounded and later dies leading to the separation of his khalasar. Following Drogo's death, Daenerys hatches three dragon eggs in his funeral pyre and Kovarro swears his loyalty to her. She names him as one of her bloodriders alongside Rakharo and Aggo.[1][2]

Daenerys leads what remains of her khalasar deep into the Red Waste. Facing starvation she sends Rakharo, Aggo, and Kovarro to scout in three different directions, using the last remaining horses. Kovarro is sent east, and is the only of the three bloodriders who returns alive (Rakharo is killed by a rival khalasar, and Aggo's fate is unknown).[1] He finds the city of Qarth and is met by the ruling council called the Thirteen. Hearing of the dragons, they invite Daenerys to the city, and give Kovarro a replacement horse for his ride back into the Red Waste. He returns to the khalasar and reports his discovery that Qarth is three days to the east, on the sea.

Kovarro leads the khalasar to Qarth, but the Thirteen refuse to admit them without seeing the dragons. Daenerys threatens them and they are admitted under the protection of Xaro Xhoan Daxos.[3]Xaro welcomes Daenerys into his home, giving her people accommodation and buying her gifts.

He throws a reception for her in his gardens. Several of her khalasar are also present. Daenerys is distracted by Jorah Mormont, Kovarro and Malakho gathering around a bejeweled golden peacock statue. She asks Jorah what they are doing and he reports that they are discussing stealing the statue. Malakho thinks that it is too heavy, but Kovarro believes that they can parcel out the weight by prying out the jewels and chopping up the soft gold. Daenerys admonishes her bloodrider to show more respect for their host. He says that he will wait until they leave and she cautions him not to steal from the man who saved them from the Red Waste.

Somewhat confused with Daenerys's civility, Kovarro and Malakho walk off. Kovarro takes a goblet from a passing servant, emptying the liquid from it.[4] Later, Kovarro accompanies Daenerys to a meeting with the Spice King who refuses to invest in her return to Westeros. When they return to Xaro's home, they find that it has been attacked. Irri and several Dothraki warriors have been killed along with some of Xaro's guards, and the dragons have been stolen.[5]

Kovarro stands guard for Daenerys when she appears before the Thirteen to appeal for their help. They are stunned when Pyat Pree admits to the theft and proclaims Xaro the king of Qarth. Pyat uses his magic to murder the rest of the Thirteen. Kovarro ushers Daenerys out of the meeting room. Pree's doubles follow them and invites Daenerys to reclaim her children at the House of the Undying.[6] They take refuge in a disused courtyard and Daenerys convinces Jorah to accompany her to reclaim her dragons despite their certainty that it is a trap.[7]

Kovarro aids Jorah and Daenerys to the House of the Undying. He stands guard and waits for her return, following her disappearance in the circular trickery of the tower. After escaping the House of the Undying following Daenerys's murder of Pyat, he is by her side when Daenerys discovers Doreah and Xaro in bed, and confines them to the empty chamber within his vault. He helps raid the palace of any gold and silver to pay for a ship to Slaver's Bay.[8]

Kovarro being sent East in "The North Remembers."

Kovarro saddling his horse in "The North Remembers."

Kovarro in "The Ghost of Harrenhal."

Kovarro in "The Ghost of Harrenhal." 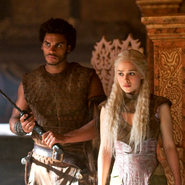 Kovarro guarding Daenerys Targaryen in "A Man Without Honor." 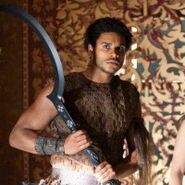 Kovarro in "A Man Without Honor."

Kovarro staying guard outside the House of the Undying in "Valar Morghulis." 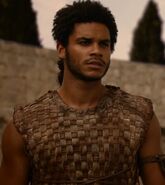 In A Song of Ice and Fire, after Drogo dies and Daenerys hatches her dragons, her three bloodriders are Aggo (who is skilled with a bow), Jhogo (who is skilled with a whip), and Rakharo (who is skilled with a sword). In the books, Jhogo is very young, while Rakharo is older and has a mustache. In the TV series, her three bloodriders are Aggo, Rakharo, and "Kovarro" -- Jhogo was apparently renamed to avoid confusion with Jhaqo, one of Drogo's kos who after Drogo is incapacitated declares himself Khal and takes a portion of the khalasar as his own. Jhaqo thus becomes a bitter enemy to Daenerys, so Jhogo was renamed to "Kovarro" to keep his name distinct.

The new name "Kovarro" was created by the writers, based on the guide to making new Dothraki names that language consultant David J. Peterson developed for them. As Peterson explained in his blog: "Our new name Kovarro, then, derives from the verb kovarat, which means 'to stand'. Kovarro, then, is kind of like 'stander (who is male)': a tough guy who stands his ground."[9]

However, neither Rakharo nor Jhogo are killed in the aftermath of Drogo's death, as Rakharo is in the TV series. By the point the books reached, both of them (and Aggo) are alive and well. Nor is this a condensation of a different death scene, as both characters remain alive and well throughout the second book.