"Blood of My Blood" (Bran's vision)

Karsi was a spearwife and chieftess of the ice-river clans, among those who retreated to Hardhome after the wildlings' defeat at the Battle of Castle Black.

Karsi lost her father, her uncle, and two brothers fighting the Night's Watch.

When Lord Commander Jon Snow and Tormund arrive at Hardhome to offer the Free Folk to retreat to Castle Black and settle south of the Wall, a meeting of the clan chieftains is held, where Karsi represents her clan. The Lord Commander appeals to their shared purpose against the White Walkers and offers them a cache of dragonglass as a weapon against the White Walkers. Magnar Loboda dismisses this as just as unlikely as the mythical "ice spiders as big as hounds". Karsi asks how, with everything they have seen, Loboda can still call this unbelievable. She decides to side with the Lord Commander's plan as long as Tormund vouches for him, but Loboda remains stubborn. He claims that all the Free Folk who get on the Crows' boats will be executed, as they have always been enemies. When he says his ancestors would spit on him if he broke bread with a crow, Karsi retorts that her ancestors would too, but since they are all dead, it doesn't matter. Nevertheless, Loboda abandons the hall and is followed by many other chieftains. As Jon, Tormund, and Karsi stand in dismay, she mutters, "I fucking hate Thenns!"

When Lord Commander Jon Snow and Tormund arrive to retrieve the wildlings to escape the imminent invasion of the White Walkers, Karsi initially is hostile towards Jon, but after listening to him and Tormund, she agrees to their plan and begins boarding her people into longboats.

They begin boarding the wildlings into the longboats, and Karsi puts her daughters in one of them, telling her youngest that her older sister Johnna is in charge until she comes back. The girl protests, but Karsi says she needs to be there to get the old people on the boats, and promises to be just behind them. Then, the White Walkers attack with their Army of the Dead, and Karsi joins the defense of Hardhome while buying time for the rest of the Free Folk to board the boats bound for Castle Black. During the Massacre at Hardhome, Karsi manages to kill several wights while defending the remnants of the Free Folk. Jon Snow tries to convince her to board the boats, but Karsi argues he should go instead, as she doesn't believe the Night's Watch men at Castle Black will let her daughters and the rest of the wildlings through the Wall if Jon Snow is not there. During the fighting, Karsi is confronted by child wights and freezes in shock. Unable to bring herself to kill children, she is overwhelmed. A moment later, she becomes part of their army raised by the Night King.[1]

While Bran Stark is on the run from the undead army of the Night King, Karsi is briefly shown as a wight in one of his visions.[2] 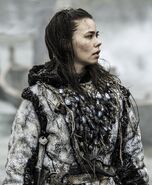 Karsi sending her two daughters off.

Karsi stunned by the undead children.

"I lost my father, my uncle and two brothers fighting the damn crows."
―Karsi during the meeting with Jon Snow.[src]

"I'll never trust a man in black...but I trust you, Tormund. If you say this is the way, we're with you."
―Karsi agrees to follow Tormund back to Castle Black with the Night's Watch.[src]

"I fucking hate Thenns."
―Karsi reveals her hatred of Thenns to Tormund, mirroring the moment in which he said the exact same thing.[src]

Jon Snow: "You should be on one of those boats!"
Karsi: "So should you! My little girls got on. They're gonna let them pass the Wall even if you're not there?"
Jon Snow: "You have my word. I've given orders."
Karsi: "Don't think you're gonna be there to enforce those orders!"
— Karsi and Jon Snow during the massacre at Hardhome.[src]

The HBO Viewer's Guide identifies Karsi as a chieftain of the Ice-river clans, but this may be an error, for two reasons. First, the Ice-river clans in the novels are savage cannibals, considered half-feral even by the other wildlings - though the TV series also made changes like this before, such as how they made the Thenns fierce cannibals, when in the novels they are actually the most culturally sophisticated of the wildlings, even forging their own bronze weapons (the TV version of the Thenns are basically a condensation of the Thenns with the Ice-River clans).

Second, the ice-rivers that the clans come from are actually deep in the interior of the lands beyond the Wall, far away from the coasts. Their lands are so far north that little grows, which is why they actively hunt other wildlings for their meat. Karsi and her followers, however, are visibly decorated with seashells, and costume designer Michele Clapton said that this is to indicate wildlings that live near the coasts, hinting that Karsi may be of the Frozen Shore. There is no clear explanation for the discrepancy - it was only mentioned exactly once in the Viewer's Guide entry for Karsi, but not in the episode itself.

Speaking in an interview with The New York Times, actress Birgitte Hjort Sørensen responded to a comment about how "maternal" Karsi was to her children, by saying how delighted she was that her character wasn't written in a patronizing way or downplayed as a leader because she was female:

"You say 'maternal' and certainly she was in that moment. But I was quite pleasantly surprised that this was a role where gender really didn’t matter. I didn’t feel I was 'the woman chieftain.' I felt like we were all on the same team together. That was a fun experience for me because it’s rare."[3]

As it turns out, however, director Miguel Sapochnik explained in a separate interview with MTV.com that the reason for this is that Karsi was originally written to be a man, and only recast with a female actress late in production:

"She was a guy originally, and then somewhere in the process we thought it might be cool if she were a mother, and show her sending off her own kids to make that moment with the corpse children really resonate emotionally. As the sequence was refined, she emerged as this clear representative of all the wildlings, which was organic, and it made us care. Then we started casting and saw Birgitte's work and she got the part."[4]

In the novels, one of Tormund's sons died and was later raised as a wight, and he actually killed the wight himself. Regardless of being a man, Tormund was still distraught about it as a father:

In the A Song of Ice and Fire novels there are several female chieftains and raiders among the Free Folk. One of the most prominent is Morna White Mask, a warrior and woods witch dubbed "White Mask" for the weirwood mask she wears. When Tormund convinces prominent wildling leaders to join forces with the Night's Watch and be accepted at the other side of the Wall, Morna offers Jon Snow to be his man or woman, whatever he desires. She lifts her mask just briefly enough to kneel and kiss his hand as a sign of fealty.