View source
watch 01:41
Who is Jojen Reed?
Do you like this video?
Play Sound

"The Great Tourney at Harrenhal"
"The Spoils of War"

"I'm Jojen Reed, this is my sister, Meera. We've come a long way to find you, Brandon, and we have much farther to go."
―Jojen Reed to Bran Stark[src]

Jojen Reed was the son of Lord Howland Reed and younger brother of Meera Reed. A greenseer, he accompanied his sister, Bran Stark, Rickon Stark, Osha, Hodor and Stark direwolves Summer and Shaggydog on a journey beyond the Wall to find the Three-Eyed Raven, believing Bran to be instrumental in the oncoming war against the White Walkers.

Jojen is the eldest son and heir of Lord Howland Reed of Greywater Watch. His sole sibling is his elder sister, Meera Reed. Due to his status as a greenseer, Jojen has the ability to experience visions of the past, future and present. Following the execution of Eddard Stark, which is seen by Jojen in a vision, he tells his father of the death of his liege lord.[1]

Bran Stark, Rickon Stark, Osha, Hodor, Summer, and Shaggydog are fleeing to Castle Black following the Sack of Winterfell[2] when Jojen first appears to Bran in a dream, in which Jojen explains that Bran's attempts to kill the Three-Eyed Raven omnipresent in his dreams are futile, since Bran himself is the future variant.

Later he walks up to him while he is alone in the forest saying that he and his sister have been searching for him for a long time so that they can protect him. Osha surprises Jojen by putting a spear to the back of his neck, but Osha releases him when Meera suddenly appears with a knife to Osha's neck. Osha warns Jojen that Summer will protect Bran, should Meera harm him but Summer sniffs Jojen's hand and walks on.

Jojen and Bran bond as they discuss their fathers when Jojen recalls that he has traveled in his mind to witness Robert's Rebellion in his dreams, as well as Eddard's death. Jojen gives cryptic information about Bran's powers as a warg, explaining that Bran himself is the most significant revelation of his visions. Osha grows increasingly resentful of Jojen.[3]

Jojen and Bran share a greensight dream where Bran climbs a tree to follow a three-eyed raven, although Bran falls after Catelyn Stark appears repeating her warning in which she made him promise never to climb again - a promise Bran broke. Bran and Jojen wake in their camp in the woods, disappointed that he could not follow the Three-Eyed Raven.[4]

Later, Jojen Reed has another vision which causes a seizure. Meera quickly plugs his mouth to stop him biting his own tongue. When he comes to, Jojen tells Bran that in his vision he saw Jon Snow Beyond the Wall surrounded by enemies.[5] This means that Bran's safety at Castle Black could not be guaranteed.

Continuing northward, Osha remains distrustful of the Reed siblings, peppering Jojen as to whether his conversations of magic are helpful. She reacts with horror when Jojen mentions that they intend to go beyond the Wall to find the Three-Eyed Raven. Osha bluntly refuses to go, explaining that she lost her husband, who then rose from the dead and tried to kill her. She rages that none of them understand what lies beyond the Wall and that there is nothing left for men there.[6]

After seeking shelter in a derelict windmill during a rainstorm, the group notices a band of wildlings chasing down an old man. The sounds of thunder terrify Hodor, who shouts out in panic. Fearing discovery, Jojen tells Bran to silence Hodor, who keeps panicking. Bran unintentionally uses his warg powers to render Hodor unconscious. With the wildlings still outside, Jojen convinces Bran to warg through Summer and Shaggydog outside, who then maul to death some of the wildlings. While in control of Summer and Shaggydog, Bran sees Jon Snow outside fighting the wildlings.

After this, Bran insists that he must go beyond the Wall to find the raven. However, he wants Rickon to be safe, so he tells Osha to take his brother with her to the holdfast of Greatjon Umber, a loyal bannerman of the Starks. Bran bids a tearful Rickon farewell, who leaves with Osha and Shaggydog to the seat of House Umber, while Bran continues northward with Hodor, Summer and the Reed siblings.[7]

At last, the group make it to the Wall and stay overnight in the Nightfort, an abandoned castle on the Wall that is rumored to be haunted. Bran recalls a multitude of scary stories he had heard from Old Nan about Nightfort, but Jojen expresses his preference for horror, so Bran retells the legend of the Rat Cook. During the night, Jon Snow's fellow Night's Watch comrade Samwell Tarly, with Gilly and her child, emerge from a secret passageway inside the Nightfort.

Samwell, noticing the gigantic Hodor and Summer, realizes who Bran is and offers to take them to Castle Black, but Jojen tells Sam that they are going beyond the Wall, as no force in the realm of Westeros could withstand the threat posed by the White Walkers. Sam reluctantly shows them the secret sally port and gives them the dragonglass daggers he found at the Fist of the First Men, which he earlier used to slay a White Walker. That night, Bran, the Reeds, Hodor and Summer finally pass beyond the Wall.[8]

When Bran becomes obsessed with warging Summer, Jojen is forced to warn him of the dangers that perhaps Bran will be trapped by his own powers. He emphasizes that they need Bran to survive. Heading further North, Jojen helps Bran find a heart tree. Bran touches the tree, triggering his greensight, showing him a larger heart tree where they must go to find the Three-Eyed Raven, along with several other visions, including the shadow of a dragon flying over King's Landing.[9]

Later, Bran and his companions, having journeyed past the Wall, are resting near Craster's Keep. They hear the faint sounds of a baby's cries. Bran enters the mind of Summer to investigate where he finds Ghost, the direwolf of Jon Snow. However, before he can free Ghost, Summer is caught by a trap. At Meera's urgings, they go to rescue Summer and Ghost but are taken prisoner by Karl Tanner. While Hodor is being tormented by Rast and the other mutineers for pure amusement, Karl threatens to kill Jojen, who begins to hypersalivate with the toil of Greensight, and Meera before Bran gives up his identity.[10] During this time, Jojen suffers another seizure and has a vision of Karl's burning body.

Jojen and the others are being held imprisoned in a tent. Karl enters the tent and ties up Meera and prepares to rape and torture her. Jojen begs for mercy and offers to help them, saying he possesses the sight. Karl refuses and just before he cuts Meera, Jon Snow and members of the Night's Watch attack the keep. Locke, who really serves Roose Bolton, searches for Bran and finds him and attempts to escape the keep with Bran as a hostage. However, Jojen signals Bran to warg into Hodor, allowing him to save his own body through Hodor's. When Bran is about to get Jon's attention, Jojen arrives and intervenes, telling him that Jon will not let him search for the Three-Eyed Raven if he goes with Jon. Bran agrees and prepares to leave.[11]

As they are walking to the great weirwood tree (the roots of which descend into the cave of the Three-Eyed Raven), Meera laments Jojen's ill health. However, Jojen points out their arrival at their destination. Some time later, they are ambushed by wights that emerge from beneath the snow. Jojen is grabbed by one of the wights, but Meera comes to his aid before he is dragged beneath the snow.

Meera successfully protects him, but one of the seemingly defeated wights pulls a knife out and repeatedly stabs him. Jojen lives long enough to see Leaf, a child of the forest, and tells his sister to go with Bran and the others. Before doing so, Meera mercifully cuts his throat. Soon after, the Leaf uses her magic to destroy Jojen's body to prevent its reanimation as another wight. Upon entering the Cave of the Three-Eyed Raven, Meera inquires into her brother's death, to which the Raven then reveals that Jojen knew that the quest would cost his life.[12]

During Meera's rant at Bran, she mentions that Jojen, Summer and Hodor all died to make sure he survived for the Great War.[13] She also mentions that Bran 'died' when he became the Three-Eyed Raven, referring to his change in personality.

Jojen was a powerful and natural-born greenseer, and could receive glimpses of the past, present and future in visions. Jojen also possessed the ability to detect other greenseers, as he did with Bran Stark. In addition, Jojen was able to see visions of his own death, allowing him to have no fear of it.

Jojen, Hodor, Bran, and Meera at the Nightfort.

Arriving at the cave of the Three-Eyed Raven. 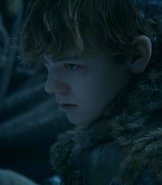 In the A Song of Ice and Fire novels, Jojen Reed is the only son and heir of Lord Howland Reed of Greywater Watch, the southernmost of the vassal houses sworn to Winterfell. Jojen is thirteen and is noted as being serious and solemn for his age, yet also wise beyond his years, leading Old Nan (who was still alive at this point) to nickname him "Little Grandfather".

In "A Clash of Kings", Jojen and his sister arrive at Winterfell to renew the crannogmen's vows of fealty to the Starks; they are welcomed amiably. Later, in private, Jojen tells Bran that he had green dream about a winged wolf bound to earth with grey stone chains; a three-eyed crow was trying to peck through the chains, but the stone was too hard and his beak could only chip at them. Jojen explains that Bran is the chained winged wolf, and the crow sent the Reeds to break his chains. Meera says that when her brother told their father about the dream, he sent them to Winterfell for that purpose.

Jojen keeps asking Bran about his dreams, and about warging into Summer. Bran is angered by those questions, and his rage prompts Summer and Shaggydog to attack the Reeds. Frightened and ashamed, Bran quickly calls Hodor, who chases the wolves away.

Jojen and Meera are guests at Winterfell when it is taken by Theon Greyjoy, as they originally came in their father's stead to renew fealty with House Stark when Bran becomes the acting Lord of Winterfell. It is Jojen, not Bran, who dreams of the attack of the ironborn, as well as the deaths of Alebelly the guard, Septon Chayle and Mikken. When the Stark boys escape Winterfell with their wolves, Hodor, and Osha, the Reeds join them.

Jojen does not die during the battle with the wights in the book. Although increasingly sick by the time the group arrives at the cave, he makes it with the rest of them. Jojen has in fact had a dream about his fate, and he implies to the group that the outcome is not good, but it has not yet come to pass. It is unknown, but somewhat likely, that he will have a similar death scene in future novels.

Jojen states that, while he has dreams of the future, he is in fact simply a warg and not a greenseer.