"The Wolf and the Lion"

"The Kingsroad"
"Cripples, Bastards, and Broken Things"
"The Old Gods and the New"
"The Wars to Come"

"What good is war now? We're not ready. If one Hand can die, why not a second?"
―Illyrio conspiring with Varys.[src]

Illyrio Mopatis is a Magister of Pentos and a supporter of House Targaryen.

Illyrio is a merchant-prince and a Magister of the Free City of Pentos, located across the Narrow Sea to the east of Westeros in Essos. Immensely rich and powerful, Illyrio is an ally and benefactor to Viserys and Daenerys Targaryen. He lives in a great manse in the city, guarded by Unsullied.

Illyrio brokers the deal to "sell" Daenerys in marriage to Drogo of the Dothraki. Drogo desires an exotic wife from far away and Viserys needs a Dothraki army to help retake the Seven Kingdoms, so a bargain is made. When Drogo comes to approve of Daenerys, he rides up to the steps, looks her over, and then rides off. Viserys is concerned as Drogo had not said a word nor had he even dismounted. However, Illyrio assures him that if Drogo had not approved, he would have made it known. Illyrio is present when Daenerys says that she doesn't want to marry him. Viserys says she will, and that he would let Drogo's men and all their horses rape her if it meant that in return he could get an army to help him retake the Iron Throne.

Illyrio hosts the wedding and presents Daenerys with a gift of three dragon eggs, turned to stone by the passing of ages. He introduces them to Jorah Mormont, a Westerosi lord in exile who then takes service with Viserys.[1] Drogo immediately leaves with his khalasar, traveling to the far east for Vaes Dothrak to present Daenerys before the dosh khaleen, and see if the omens are right for war. Jorah tells Viserys that he should stay at Illyrio's estate, as he has been invited to do, until Drogo returns from the sacred city, but Viserys says he will stay with the khalasar until he gets his army.

Some months later, Illyrio pays a secret visit to King's Landing where he discusses their mutual plans with his secret ally, Varys, the Spymaster at the small council. Varys informs him of how the new Hand of the King, Eddard Stark, now has the same genealogy book that his predecessor read, and has met Robert's bastard son Gendry; the same evidence which led Jon Arryn to discover the truth about Cersei's children. Illyrio suggests the possibility that the same fate may befall Lord Stark as did his predecessor, but Varys states Eddard is not the same man as Arryn was. Furthermore, he assures Illyrio that the conflict between the Lannisters and the Starks will soon escalate into a civil war. Illyrio protests that a war will not serve their purpose right now, since Drogo is not yet ready to send his army of Dothraki to invade Westeros for Viserys. However, Varys retorts there is no way of delaying the incoming conflict, so the Dothraki must be urged to move faster, since "this is no longer a game for two players." Illyrio replies that it never was. Their discussion is overheard by Arya, who is with them in the tunnels under the Red Keep. Arya tries to warn her father about what she heard, but she doesn't know who the speakers were and out of context all she understood was that her father "has found the bastard", that "the wolves are fighting the lions", and "something about the savage." Despite their secret conversation, later at a small council meeting Varys seemingly supports Robert's proposal to assassinate Daenerys Targaryen because of the threat her pregnancy and the possibility of a son poses. This information was presumably brought to Varys by Illyrio, who placed Jorah Mormont with the Targaryens and visited Varys on the same day Varys brought this information to the small council.[2]

The Spice King, a Qartheen merchant, is acquainted with Illyrio, considering him a shrewd man.[3]

After crossing the Narrow Sea, Varys and Tyrion have settled at Illyrio's home in Pentos, and Varys reveals he is a colleague of Illyrio, both from a group of people seeking a Targaryen restoration.[4] 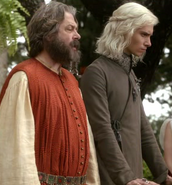 Viserys and Magister Illyrio in "Winter Is Coming".

Illyrio, Viserys, and Daenerys look across the Narrow Sea toward Westeros.

Ian McNeice as Illyrio in the unaired pilot episode.

"Respect to one that is respectful, great khal! May I present my honored guests, Viserys of House Targaryen, the Third of His Name, the rightful King of the Andals and the First Men; and his sister, Daenerys of House Targaryen."
―Illyrio introducing Khal Drogo to his future wife and brother-in-law.[src]

"It won't be long now. Soon, you will cross the Narrow Sea and take back your father's throne. The people drink secret toasts to your health... they cry out for their true king."
―Illyrio to Viserys.[src]

"Kings lack the caution of common men."
―Illyrio to Viserys.[src]

"A Dothraki wedding without at least three deaths is considered a dull affair."
―Illyrio shares his insight on Dothraki culture with Viserys.[src]

Varys: "He's found one bastard already, he has the book. The rest will come."
Illyrio: "And when he knows the truth, what will he do?"
Varys: "The gods alone know. The fools tried to kill his son, and what's worse: they botched it. The wolf and the lion will be at each other's throats. We will be at war soon, my friend."
Illyrio: "What good is war now? We're not ready. If one Hand can die, why not a second?"
Varys: "This Hand is not the other."
Illyrio: "We need time. Khal Drogo will not make his move until his son is born. You know what these savages are."
— Illyrio and Varys conspiring in the cellars beneath the Red Keep.[src]

In the A Song of Ice and Fire novels, Illyrio is a middle-aged man who dresses in rich finery. He favors using money and power to overcome problems rather than honor and valor. In his youth, he used to be slender; at present he is described as morbidly obese, with yellow hair and a forked beard. According to Tyrion, he looks like a dead sea cow that had once washed up in the caverns under Casterly Rock.

Illyrio was married twice: his first wife was the daughter of a cousin of the Prince of Pentos. After their marriage ended (it is not specified whether Illyrio's wife died or left him), he took a Lysene pillowhouse worker named Serra as one of his bedwarmers, fell in love and married her, although he knew that would upset the Prince. The Prince was indeed angry, and barred the palace to him forever after, but in Illyrio's eyes it was a small price for Serra. Illyrio was very happy with her, until a Braavosi trading galley brought the grey plague (a virulent sickness which is swifter than the greyscale) to Pentos. Serra was one of the 2,000 victims. Illyrio cherishes her memory, and has not been married for a third time.

In the second novel, Illyrio dispatches a former pit-fighter called "Strong" Belwas along with the aged squire Arstan Whitebeard - actually a disguised Barristan Selmy - to Qarth to protect Daenerys; he also sends her three ships to carry her and her followers to Pentos. Daenerys, however, is persuaded by Jorah Mormont to sail to Slaver's Bay in order to buy slaves.

In the fifth novel, Illyrio receives Tyrion in his manse himself; it is him (not Varys) who convinces him to go to Meereen to serve Daenerys, and accompanies him some of the way there; afterwards, Tyrion travels with a sellsword named Griff, his son and several servants. Illyrio does not reveal to Tyrion that Griff and his son are in fact the presumed-dead Jon Connington and Aegon Targaryen; Tyrion figures that himself.

Illyrio arranges Daenerys and Aegon to meet (and marry) in Volantis; when Aegon and Connington reach there, where the Golden Company is waiting for them, they find out that Daenerys remained in Meereen, and they cannot reach her due to the siege. Aegon, following Tyrion's advice, suggests to sail to Westeros instead; most of the officers, who have grown tired of Illyrio's plan that changes so often, approve of the suggestion. Soon they sail to Westeros.

While Meereen is besieged by the Yunkai troops and their hired sellsword companies, the Tattered Prince, the commander of the Windblown sellsword company, offers Daenerys to join her troops in exchange for Pentos. Although Daenerys desperately needs troops, she rejects the offer because Illyrio has always been her loyal friend and she wouldn't repay him by giving his city to sellswords.

According to the TV series official pronunciation guide developed for the cast and crew, "Illyrio" is pronounced "Il-LEAR-ee-oh ", as opposed to "Ill-e-rio", etc.