House of the Dragon: Season 1

House of the Dragon:
Season 1

Season 1 begins approximately 200 years before the War of the Five Kings, and 100 years after the Targaryen Conquest united the Seven Kingdoms. House Targaryen has reigned as the rulers of Westeros for five generations, and the number of dragons they possess has increased to more than ever before. At the end of the reign of King Jaehaerys I Targaryen, grandson of Aegon the Conqueror, a succession dispute arises between two of his grandchildren, which is resolved when the lords of Westeros assembled at the Great Council at Harrenhal select Viserys I Targaryen to be the royal heir ahead of his cousin Rhaenys - even though she had a superior claim, and largely due to her gender. The story begins a few years later when old King Jaehaerys passes away and King Viserys I ascends the Iron Throne. Outwardly, the realm has enjoyed a golden age of peace and prosperity for fifty years, and the Targaryen dynasty is at the height of its power. Yet factions are starting to form within Viserys's court that threaten the stability of his reign.

Rhaenys and her husband Corlys Velaryon, the wealthiest man in Westeros, remain bitterly estranged from the royal court due to being passed over. House Velaryon have long served as admirals of the Royal Fleet and still wield much strength at sea, and there are still some in the realm (such as House Stark) who at the Great Council wanted Rhaenys's son Laenor Velaryon to be king instead of Viserys. Meanwhile, Viserys's Hand of the King Otto Hightower seeks to expand his own family's power and influence over the royal court from within. As the rulers of Oldtown, the realm's second largest city, House Hightower wields a great deal of control over the leadership of the Faith of the Seven. Complicating matters is that while Viserys was named heir ahead of Rhaenys due to male preference, Viserys himself has yet to produce a male heir of his own. His only living child when he ascended the throne was his daughter Princess Rhaenyra Targaryen - but according to the principle of male inheritance that put Viserys on the throne ahead of the Velaryons, his nearest male heir is his younger brother Daemon Targaryen, a dangerous and unpredictable rogue.

The peace of the realm is set on a knife's edge when not long into Viserys's reign, his wife Aemma Arryn dies in childbirth to a stillborn son. To avoid the risk of his brother making a play for the throne, Viserys controversially goes against the very inheritance principle that crowned him king, by officially naming his daughter Rhaenyra as the new royal heir. Both the Velaryons and Hightowers subsequently scramble to compete for Viserys's favor, trying to convince him to remarry to a daughter from one of their families: either Rhaenys's daughter Laena Velaryon or Otto's precocious daughter Alicent Hightower. Moving in between these competing factions, Viserys's brother Daemon pursues his own path to power.

Filming on Season 1 began in late March 2021 and concluded in mid-February 2022.

The season had two filming units, named "Fire" and "Blood" after Fire & Blood, the prequel anthology book that the series is based on. Game of Thrones began with two major filming units: one designated as the "home unit" filming in the British Isles and another the "travel unit" which filmed in Mediterranean countries (plus Iceland at times). The travel unit had to face the difficulties of transport and on-location shoots, thus to balance the workload, most of the large battle scenes were filmed by the home unit. For House of the Dragon, "Fire unit" is the new home unit filming in England, while "Blood unit" is the travel unit that filmed in Spain and Portugal.

While there were two main units, they technically had four by the end of filming because two sub-units split off: the "VFX Unit" and the "Volume Unit" (for the Virtual Production Stage, which is called "The Volume").[4]

On-location filming first began in Cornwall, England, at the Driftmark set at St Michael's Mount, a castle on a tidal island. Filming in Cornwall wrapped around mid-May. Exterior filming then resumed in early September, in the Peak District of northern England, after which extensive filming resumed in Cornwall,. Production then shifted to Spain and Portugal from the beginning of October through early November.

On-location filming wrapped in early November, and filming overall was intended to wrap by mid-December 2022. However, the spike of the COVID Omicron variant that winter delayed the final wrap for about three months. As director Greg Yaitanes put it, from December onward they kept thinking that they were "only two weeks away" from the final wrap, but then production would be shut down from another crewmember testing positive for COVID, then they'd start up again for a few days only to have to stop for another positive case, dragging on like this into mid-February. Yaitanes said this was all the more annoying because filming was almost finished by mid-December, including all the exterior scenes, but there were still a small number of nonetheless vital interior scenes which they couldn't simply leave unfilmed.[5]

Originally, Miguel Sapochnik was actually supposed to film the first and second episodes as a back-to-back block, while Greg Yaitanes was going to direct episodes 3, 7, and 10. Yaitanes particularly wanted to work on episode 7 because it was his favorite script. A scheduling difficulty arose with one of their exterior filming locations, however, which meant that episode 2 had to be filmed immediately - but Miguel Sapochnik was filming a different episode at the same time. Yaitanes therefore had to step in and direct episode 2, and due to time constraints had to swap back directing duties on episode 7 to Sapochnik. They weren't sure at first if Sapochnik or Yaitanes would direct episode 10, but Yaitanes felt that getting to do the season finale somewhat made up for missing episode 7, which was the one he had wanted to do the most. Yaitanes said that Sapochnik already had a very clear vision in place for what he wanted from episode 2, and he tried to follow that closely.[6]

George R.R. Martin explained in a blog post on February 20, 2022, how the series was developed from conception to assigning specific scripts for the first season. In the early production phase, Martin himself collaborated with Ryan Condal on a pilot script for the first episode, but when the Long Night prequel pilot was suddenly rejected in October 2019, HBO greenlit a full first season for House of the Dragon - skipping the pilot stage entirely, surprising even Condal. In the early "brainstorming" stages outlining the series as a whole beyond the first season, Condal and Martin had a "mini writers room" with screenwriters Claire Kiechel, Wes Tooke, and Ti Mikkel. All three did contribute to ideas for the series as a whole, but Kiechel and Tooke departed for other projects before the writing process on specific Season 1 scripts began (thus they were not part of the "writers' room" roundtable meetings in Season 1). Ti Mikkel, however, is a writing assistant to Martin, and remained as part of the writers' room meetings for Season 1 itself (though she is not credited with writing a specific episode, Martin mentions her alongside the others as part of the Season 1 writing staff).

In his blog post, Martin listed that the Season 1 writers' room consisted of eight people: "Ryan Condal, Sara Hess, Gabe Fonseca, Ira Parker, Ti Mikkel, Charmaine DeGrate, Kevin Lau, and Eileen Shim". He also said that some of them have moved on to other unrelated projects and will not be returning for Season 2, though others do expect to return for a potential second season. Martin himself was also unable to contribute a specific full script to Season 1 due to his other writing commitments. Martin did confirm, however, that "I did co-create the series with Ryan and help give it its shape, and he and I have been in constant contact ever since". This is in contrast with the Long Night prequel series, which Martin later said HBO's (former) leadership picked and which he admitted he was barely involved with.[18]

Specific writing credits for Season 1 are:

Each cinematographer (director of photography) is paired with a specific director's filming unit:

House of the Dragon - Official Teaser 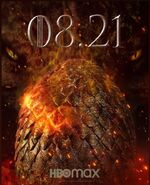 Main article: Differences between books and TV series/House of the Dragon: Season 1

The season is adapted from Fire & Blood, the history of House Targaryen.

Português do Brasil
Community content is available under CC-BY-SA unless otherwise noted.
Advertisement