Lords of the Last Hearth

"We're farther north than any of you fuckers."
―Smalljon Umber to Ramsay Bolton and Harald Karstark[src]

House Umber of the Last Hearth is an extinct[1] vassal house that held fealty to House Stark of Winterfell. Their lands were in the far north of the Stark territories, just south of the Wall and the lands held by the Night's Watch. Their stronghold was a castle called the Last Hearth and the head of the house was known as the Lord of Last Hearth. Following the Fall of Last Hearth, an early event of the Great War, House Umber is extinct in the male line. It is unknown whether any female members of the house survived the conflict.

House Umber's sigil is four chains linked by a central ring on a dark red field. Their motto is not known at present.

House Umber rallies behind House Stark in the War of the Five Kings, with Greatjon Umber being the first to suggest crowning Robb Stark King in the North and knelt before him.[2]

Bran Stark sends his brother Rickon, Osha, and Shaggydog to seek shelter at the Last Hearth because the Umbers are loyal bannermen of the Starks.[3]

Although refusing to pledge fealty to House Bolton, Smalljon Umber asks Ramsay Bolton to join forces with him to fight the Free Folk that have been let into the realm by Jon Snow, who pose a threat to the Umbers given Last Hearth's proximity to the Wall. To seal their alliance, Smalljon hands over Rickon and Osha as captives he had betrayed to Ramsay and presents the head of Shaggydog as proof of his master's identity. Smalljon also claims that his father Greatjon is dead.[4]

When news of Smalljon's betrayal reaches Jon Snow and Sansa Stark at Castle Black, the latter declares that the Umbers "can hang."[5]

Melessa Tarly tells Gilly that she and Randyll Tarly met a Lord Umber from Last Hearth who taught his daughters how to hunt.[6]

Smalljon Umber is killed by Tormund during the Battle of the Bastards.[7]

Ned Umber, Smalljon's young son, became the Lord of Last Hearth after the Smalljon's death during the Battle of the Bastards. Ned is present during a meeting of the Northern Lords at Winterfell where his father's actions are discussed and what the consequences should be. Lord Yohn Royce and Lady Sansa Stark voice their opinions that the Umbers and the similarly treacherous House Karstark should be punished, tearing down their castles or gifting them to more loyal families, but King Jon Snow refuses to punish the new generations for their fathers' crimes. Ned is called forwards alongside Alys Karstark and reaffirms his house's loyalty to House Stark, allowing him to keep his title and home.[8]

Ned Umber and his household are slaughtered by the Night King, the White Walkers, and the army of the dead at Last Hearth. Ned’s body is left behind in Last Hearth as a message, while those who were slaughtered were nowhere to be found, likely having been reanimated as wights.[9]

Beric Dondarrion deduces the deaths of all members of House Umber. Though nearly impossible to confirm this, Tormund states that anyone who is currently north of Winterfell is most likely dead, supporting Beric's assumption.[1]

The banner of House Umber at the Tourney of the Hand in "Cripples, Bastards, and Broken Things". 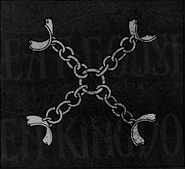 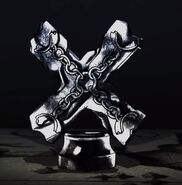 A map marker used to represent the forces of House Umber.

Infantryman of House Umber marching into battle alongside Ramsay Bolton.

In the A Song of Ice and Fire novels, the Umbers are staunch supporters of the Starks, but truly respect strength alone, and were once petty kings. The Umbers are strong, formidable warriors who enjoy life to the full, although some of the family members are less reputable, with some Umber lords said to still practice the banned tradition of First Night. Their lands are close to the Wall and they are bitterly opposed to the wildlings, as sometimes small wildling bands who evade the Watch raid their lands.

The Umbers are the northernmost noble House in Westeros, and may be named after the real English county of Northumberland or the medieval Anglian kingdom of Northumbria.

House Umber's heraldry in the books is different to the TV show. In the books, the sigil is a roaring giant in chains, but in the TV show it is just the chains. Coincidentally, this makes House Umber's sigil in the TV series greatly resemble that of House Roxton in the novels: Four golden chains linked by a central ring on sky blue. There isn't much chance of overlap in the TV narrative, however: the Umbers appear very prominently in both the books and novels, while House Roxton (a family from the Reach) hasn't been established in the TV show at all, and has barely even been mentioned in the main novels. The only appearance that House Roxton actually made was in a listing of heraldry designs released by Martin (though characters from House Roxton appear in some of the prequel novellas).