This article is about the noble house. For the special feature, see: House Tarly (Histories & Lore)

A striding huntsman, red on green.

Faith of the Seven

"I'm a Tarly. That name means something. We're not oathbreakers. We're not schemers. We do not stab our rivals in the back or cut their throats at weddings."
―Randyll Tarly to Jaime Lannister[src]

House Tarly of Horn Hill is a noble house from the Reach and formerly a vassal who swore fealty to House Tyrell of Highgarden. Their stronghold is a castle known as Horn Hill and the head of the House is the Lord of Horn Hill. House Tarly has a militarist tradition,[1] and possesses a Valyrian steel sword called Heartsbane.[2]

The Tarly sigil is a striding huntsman, red on green. Their house words are "First in Battle."

They swore allegiance to House Lannister, the new royal family after the extinction of House Baratheon of King's Landing, at the onset of Daenerys Targaryen's war for Westeros, betraying House Tyrell. Lord Randyll Tarly fights alongside Ser Jaime Lannister under the promise of being named Warden of the South after the end of the war. After the executions of Randyll and his son Dickon Tarly in the aftermath of the Battle of the Goldroad, their allegiance is uncertain. Randyll's daughter Talla Tarly has become the new head of the House and Lady of Horn Hill, while his son, Samwell Tarly, is allied with Jon Snow and the Night's Watch. With the end of the war after the Battle of King's Landing, they become the vassals of Lord Bronn of Highgarden.

King Robert Baratheon relates the story of the first time he killed someone, a highborn member of House Tarly in a battle near Summerhall. This knight's relationship to Randyll Tarly is unknown.[3] Samwell Tarly arrives at the Wall and tells Jon Snow about how disappointing he is to his hard-hearted and ruthless father.[4]

At a meeting of Stannis Baratheon's war council on Dragonstone, Davos Seaworth points out that many powerful lords from the Stormlands and the Reach have declared their support for Renly Baratheon instead of Stannis, including Mace Tyrell and Randyll Tarly.[5]

In order to explain the highborn naming customs to Gilly, Samwell uses his House as an example, mentioning that he inherited the "Tarly" name, but not "Randyll", the first name of his father. When she points out that Randyll is a handsome name, he asks her to please not give it to her newborn son.[6]

Surprised that Samwell is Randyll's son, Stannis Baratheon recounts to Sam how Lord Randyll Tarly defeated Robert Baratheon in the Battle of Ashford, the only battle Robert ever lost, for which King Stannis considers Tarly a fine soldier.[7] Later, Jon gives Sam permission to leave Castle Black to go and study at the Citadel so that he can learn more about the White Walkers. He is accompanied by Craster's daughter Gilly and her child Sam.[8]

Since the Citadel does not admit women and children, Samwell Tarly decides to send Gilly and her baby Sam to stay with his family at Horn Hill. While he does not get along with his father Randyll, he regards his mother Melessa Tarly and sister Talla with great affection.[9] After landing at Oldtown, Sam and his "family" are transported by House Tarly retainers via station coach to Horn Hill. Knowing his father's hatred for wildlings, Sam tells the retainers that Gilly is a northern woman he bedded in Mole's Town and that Sam is their son.[10]

Upon arriving at Horn Hill, Sam and his "family" receive a warm reception from Melessa and Talla, the latter lending Gilly one of her dresses for dinner that evening. Randyll and his other son Dickon Tarly are out hunting when they arrive. Later that evening, Samwell and Gilly meet with his family for dinner. Samwell discusses with his father his orders from Lord Commander Jon Snow to train as a maester at the Citadel and promises to return to Castle Black. Randyll mocks his son's fighting and hunting skills; prompting Gilly to spring to Sam's defense by revealing that he had killed a Thenn and a White Walker north of the Wall. Hearing this, Randyll deduces Gilly's wildling origins and disparages Sam for being seduced by a wildling whore. Randyll's behavior prompts his wife and daughter to leave with Gilly in protest.[10]

Once the women have left, Randyll promises to find Gilly work as a servant at Horn Hill and to raise Little Sam as his grandson. However, he tells Sam that he is no longer welcome at Horn Hill and orders him to leave at first light. Samwell, now unwilling to be separated from Gilly and Little Sam, steals the family Valyrian sword Heartsbane and flees with his surrogate family.[10]

Randyll travels to King's Landing at the request on Cersei Lannister, the new Queen of the Seven Kingdoms. Cersei implores Randyll, and the other lords of the Reach to pledge fealty to House Lannister in order to defend Westeros from Daenerys Targaryen and her combined army of Dothraki and Unsullied.

Jaime then manages to get Randyll on his own, after a brief confusion of names with Dickon who is mistaken as "Rickon" to Jaime. He then makes it clear that Randyll is the most prominent of the lords of the Reach, and that the others will look to him when choosing sides. Despite Jaime mentioning the possibility of the Dothraki invading his lands, Randyll still announces that he doesn't wish to be dishonorable to Olenna. Jaime then promises to give him the title of Warden of the South, should they succeed in triumphing over Daenerys.[11]

Honoring his bargain with Jaime, Randyll commits his House's forces to a combined Lannister assault on House Tyrell's seat at Highgarden at the Sack of Highgarden. The Lannister and Tarly forces seize the castle. Lady Olenna Tyrell commits suicide by drinking poison with the connivance of Jaime.[12]

At the Battle of the Goldroad, Tarly forces fight alongside the Lannister army against Daenerys Targaryen, Drogon, and the Dothraki screamers, defending the loot train to King's Landing. Randyll Tarly is among the commanders of the battle. This particular Lannister-Tarly host is ultimately soundly defeated.[13]

After the battle is over, Randyll and Dickon are taken prisoner, along with the surviving Lannister and Tarly soldiers, and presented to Daenerys herself, who demands that they bend the knee or die. Randyll refuses to do so, stating that Cersei is already his queen. Dickon, following his father, also refuses, despite Randyll's futile discouragement in order to protect his son. Daenerys promptly has Drogon burn the two alive, leaving Talla Tarly, Randyll's only surviving child able to inherit (as Sam is sworn to the Night's Watch), as Lady of Horn Hill. Meanwhile, at the Citadel, Samwell has not learned of the gruesome deaths of his father and brother, due to Archmaester Ebrose wishing to spare his feelings.[14]

At Winterfell, Daenerys meets with Samwell, who saved Jorah Mormont's life from greyscale while studying to become a maester at the Citadel. Daenerys thanks Samwell for saving Jorah's life, but when she learns that he is a Tarly, she informs him that she executed his father for refusing to bend the knee. Holding back some tears, Samwell says that he is glad that he can return to his home now that his brother is the head of the House, but Daenerys informs Samwell that his brother died by their father's side, bringing him to the verge of tears and causing him to leave the room.[15]

House Tarly commands a formidable military, with a great martial tradition. They are renowned as being the House which produces the very finest of soldiers in the Reach (though House Tyrell once produced more by sheer numbers, albeit slightly less well trained than Lord Randyll Tarly's own unique forces). Horn Hill was able to field thousands of men, and their entire army remained unscathed during the War of the Five Kings. Like most Houses of the Reach, House Tarly is wealthy since the Reach is the most fertile and agriculturally productive region in Westeros.

Tarly men-at-arms are well-equipped in a uniform fashion, and well-trained by House Tarly. They are also battle hardened from previous wars such as Robert's Rebellion, wherein Randyll Tarly caused Robert Baratheon's only defeat in the war.

House Tarly, alongside their new overlords, House Lannister, easily managed to defeat House Tyrell's forces during the Fall of Highgarden, causing Olenna Tyrell's death as well as the extinction of House Tyrell.

However, their army (or at least a significant part of it) was destroyed at the Battle of the Goldroad, alongside the Lannister troops. Though exact numbers are not known for the original strength of the contingent of the House Tarly units involved in the battle, or for that matter their exact losses by the end of the battle, it can be clearly seen that losses for the Lannister-Tarly forces were severe, in an overall sense.

Tarly men-at-arms (lighting enhanced) in Season 7, with the sigil of House Tarly on their shields

The banner of House Tarly (center) at the Purple Wedding.

The sigil of House Tarly, as seen in Season 4

An alternative version of House Tarly's sigil, as shown in the Histories & Lore featurette "Valyrian Steel". 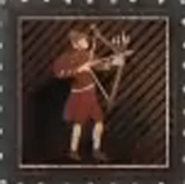 The Tarly sigil as rendered in the opening credits. 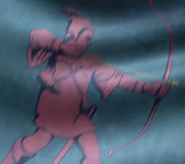 The Tarly sigil as depicted in Conquest & Rebellion: An Animated History of the Seven Kingdoms

Randyll at the head of a Tarly army.

Dickon Tarly surrounded by Tarly soldiers, after the Battle of the Goldroad

In the A Song of Ice and Fire novels, House Tarly is a loyal vassal of the Tyrells. Lord Randyll Tarly has a formidable reputation as a general, and has been named the finest battlefield commander in all of the Seven Kingdoms. During Robert's Rebellion, Randyll Tarly was the only royalist general to win a decisive victory over Robert Baratheon, defeating his army at the Battle of Ashford despite being outnumbered. Randyll's skills were later squandered during the fruitless Siege of Storm's End, while Robert and Eddard Stark won great victories further north.

Lord Randyll is a hard, ruthless man. When his son Samwell showed a preference for songs, poetry, fine clothes and good food over martial valor and a love of warfare, Randyll disinherited him and sent him to the Wall to join the Night's Watch. His fiercer, younger son Dickon was made heir in Samwell's stead. One of the major reasons Randyll states behind forcing Sam out, was that he did not want Heartsbane, the ancestral Valyrian steel sword of House Tarly, to come into the hands of a craven. There is some irony in this, as Sam goes on to kill one of the White Walkers with a blade of Obsidian, one of two materials, the other being Valyrian steel, that can harm them.