View source
watch 01:33
Wiki Targeted (Entertainment)
Do you like this video?
Play Sound

A white ship with black sails on a pale grey field with a white onion on its sails.

Stannis Baratheon: "Some highborn fools call you Onion Knight and think they insult you. So you take the onion for your sigil, sew it on your coat, fly the onion flag."
Davos Seaworth: "My son wishes me to change it. Three mermen with tridents, something like that."
— Stannis praises Davos.[src]

House Seaworth is a noble House that holds fealty to House Baratheon of Dragonstone and later House Stark of Winterfell. Their lands are located in the Stormlands. Their home is a small but cozy keep near the sea.

House Seaworth is ruled by the landed knight Ser Davos Seaworth, the so-called "Onion Knight", a reformed smuggler formerly in the service of Lord Stannis Baratheon at Dragonstone. His wife Marya is usually found at their keep.

House Seaworth came into existence after Robert's Rebellion. Davos, a smuggler infamous on the Narrow Sea for being able to smuggle anything anywhere, transported a cargo hold full of onions into the besieged castle of Storm's End, keeping the garrison alive until the war was over. Stannis Baratheon rewarded Davos by knighting him and giving him lands, though he also insisted on taking the tips of the fingers on Davos's right hand in compensation for his smuggling. Davos judged this fair, since it bought him and his family a more secure future, one he could never have imagined, much less earned for them on his own.[1]

After Stannis is defeated and killed at the Battle of Winterfell, Davos helps Melisandre bring Jon Snow back to life. When Jon comes back to life, Davos becomes his right hand man and helps him and his family reclaim Winterfell, he declares House Seaworth's support for House Stark and Jon as the newly crowned King in the North.

After the Battle of King's Landing and the assassination of Daenerys Targaryen, Davos takes part in the Great Council of 305 AC and elects Bran Stark as the new king of the Seven Kingdoms. He is later appointed as the Master of Ships. 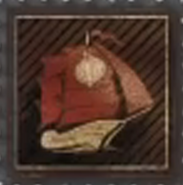 The sigil of House Seaworth as seen in the title sequence.

In the A Song of Ice and Fire novels, the full name of Davos's House is House Seaworth of Cape Wrath.

Davos has seven sons; the oldest five serve in Stannis's army, while the younger two are still children. In the TV series, the five elder sons have been functionally condensed into Matthos, and no other children have appeared or been mentioned.