A shower of pebbles on an orange field surrounded by runes.

The Vale of Arryn

"Finally uniting behind King Robar Royce, the First Men smashed the Andals in battle after battle, reclaiming the Vale and pushing the invaders back to the sea from whence they'd come."
―Petyr Baelish[src]

House Royce of Runestone is a vassal house which holds fealty to House Arryn of the Vale. It formerly was a vassal of House Stark of Winterfell, but now recognizes the Lord of the Six Kingdoms as its king. Their seat is Runestone, located east of the Eyrie, on the coast of the Narrow Sea. It is ruled by the veteran Lord Yohn Royce.

House Royce's heraldry consists of a pattern of black pebbles on a bronze field surrounded by runes in the Old Tongue of the First Men. Their house words are "We Remember." 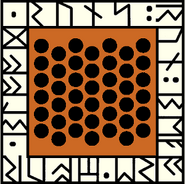 The sigil of House Royce. 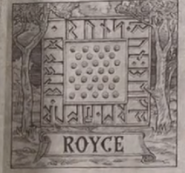 House Royce's entry in the book, The Lineages and Histories of the Great Houses of the Seven Kingdoms.

The icon of House Royce from the HBO viewer's guide.

The sigil of House Royce contains runes from the Old Tongue of the First Men.
Add a photo to this gallery

In the A Song of Ice and Fire novels, the Royces are the most powerful family in the Vale after the Arryns, and they are extremely loyal to House Arryn. House Royce is descended from the First Men, which is a very rare exception in the Vale, as the First Men were almost completely driven from the Vale during the Andal Invasion six thousand years ago. This extends to the point that in modern times the nobility of the Vale are considered to represent the purest Andal bloodlines, exterminating the local First Men instead of intermingling with them. However, House Royce managed to survive, and is very proud of their descent from the First Men, to the point that they include runes of the Old Tongue of the First Men in their sigil.

The members of House Royce are:

House Royce holds a blood-relationship to House Stark of the North: while it is an old connection, they still consider the Starks their kin, combined with their shared heritage as descendants of the First Men. Eddard Stark's paternal grandfather was Edwyle Stark, and Edwyle's younger sister Jocelyn Stark married Benedict Royce (apparently from the junior branch of the family). Jocelyn and Benedict had several children and at least three daughters, who married into House Waynwood, House Corbray, and House Templeton.

Lord Yohn Royce was the most vocal proponent among the Vale lords for openly joining Robb Stark's side during the War of the Five Kings (though Lady Lysa was able to suppress these sentiments and enforce the Vale's neutrality). After the Red Wedding, House Royce is close to open revolt over Lysa's failure to aid Robb Stark in his war, and the Waynwoods, Redforts, Belmores, and Templetons are giving them every support.

After hearing of the Sack of Winterfell, and the assumed death of his younger brothers, Robb Stark's mother Catelyn urged her son to officially name one of his distant cousins from House Royce as his heir. Arya was also assumed dead at the time, and Sansa had just been forced to marry Tyrion Lannister, and both correctly feared that should he die, the Lannisters were planning on installing any child born between Sansa and Tyrion as their puppet to rule the North. Robb disagreed on the grounds that it was still a distant relationship, and said he would prefer to name his bastard half-brother Jon Snow as his heir, because given that Robb was a king he could simply declare Jon to be legitimized. Despite Catelyn's objections, Robb issued a decree that legitimized Jon Snow and name him his heir until a son was born to him from Jeyne Westerling, and several of the lords signed the decree as witnesses. It is unknown what became of the decree, as it is no longer mentioned in the books.

Retrieved from "https://gameofthrones.fandom.com/wiki/House_Royce?oldid=414413"
Community content is available under CC-BY-SA unless otherwise noted.