A rampant (formerly passant) black bear on a white field, surrounded by a green escutcheon

~80 Men (post-Battle of the Bastards)

"We are not a large house, but we're a proud one. And every man from Bear Island fights with the strength of ten mainlanders!"
―Lady Lyanna Mormont[src]

Their house words are "Here We Stand."

House Mormont's ancestral home of Bear Island is said to have been a gift from their liege lords House Stark, which earned them the everlasting loyalty of House Mormont. The Starks are said to have won the lands in a wrestling match between King Rodrik Stark and an ironborn.[1] House Mormont is one of the oldest and proudest Northern houses, but their reputation and honor has been tarnished somewhat by their former lord, Ser Jorah Mormont, who committed the inexcusable crime (in Westeros) of dabbling in the slave trade. The house has found it difficult to shake off this disgrace, especially Jorah's father Jeor Mormont.

Lady Maege and the other Northern lords declare Robb the King in the North after the execution of Eddard Stark.

House Frey takes vengeance against King Robb for breaking their marriage contract, in collusion with his bannermen in House Bolton and his enemies in House Lannister. They orchestrate a massacre behind the facade of a wedding at the Twins. The Northern army including the forces of House Mormont are wiped out, apart from the turncoats in Houses Bolton and Frey.

Roose Bolton is named Warden of the North by King Joffrey, meaning that House Mormont now owes him allegiance, lest they remain enemies of the Iron Throne.

Lady Lyanna Mormont rules the house from Bear Island. She refuses to pledge allegiance to Stannis Baratheon against House Bolton. She replies to a letter from Stannis with a missive asserting her continuing loyalty to House Stark.

Sansa Stark and Jon Snow visit Bear Island to recruit House Mormont to their army, intending to march on House Bolton and retake Winterfell. Lyanna is initially skeptical but renews her house's allegiance to the Starks when she is informed that the army will also need to face the White Walkers. Jon and Sansa are taken aback when they find that the entire strength of Bear Island is 62 fighting men, but she assures them that every one of them "fights with the strength of ten mainlanders."

Lyanna Mormont joins Jon, Sansa, Tormund, and Ser Davos for the parley with Ramsay Bolton, the recently-made Warden of the North. She intensely stares him down.

The 62 Mormont soldiers subsequently fight for Winterfell in the Battle of the Bastards and a shield bearing the sigil of House Mormont is used by Jon to finally bring down Ramsay.

Lady Lyanna Mormont is among the many northern nobles and allies during the meeting in Winterfell after the battle. As the Knights of the Vale and the Free Folk bicker, she stands up and berates the northern houses that didn't participate in the battle for cowardice and disloyalty, personally singling out Lords Wyman Manderly, Robett Glover, and Cley Cerwyn for refusing to fight the house that had wronged their families and liege lords. She then professes her loyalty to House Stark, and joins the others in proclaiming Jon Snow the King in the North.

Lady Lyanna Mormont is the first of the Northern leaders to agree to train both boys and girls in combat.[2]

In the Great Hall of Winterfell, Lady Lyanna Mormont is amongst the Stark loyalists who disagree with King Jon Snow's decision to accept Daenerys Targaryen's invitation to Dragonstone. She boldly speaks out against Jon's decision, stating that the North needs their king at home during the winter.[3]

It is still unknown how capable is House Mormont in terms of warfare, but it is likely well-trained since Maege Mormont was among the lieutenants of Robb Stark. However, the Red Wedding significantly weakened House Mormont. The death of Maege and the mass slaughter at the Twins has greatly affected House Mormont's position in the North. However, they still remain staunch Stark loyalists by refusing Stannis Baratheon. Lyanna Mormont agreed to help Jon Snow and Sansa Stark's request in reclaiming Winterfell from House Bolton by offering 62 men in the Battle of the Bastards.

Mormont soldiers are quite distinguishable from other Northern soldiers. Their uniforms consist of wearing thick leather padding and chainmail for protection as well as using oval shields in battle. 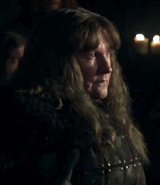 The banner of House Mormont at the Tourney of the Hand in "Cripples, Bastards and Broken Things".

The banner of House Mormont at the Stark camp in "Fire and Blood".

An old version of the Mormont heraldry from seasons one to five. This version displays a passant bear (striding), rather than a rampant one (standing).

A map marker used to represent the forces of House Mormont.

A shield bearing the new arms of House Mormont from season six onwards. This version displays a rampant bear, as described in the novels. 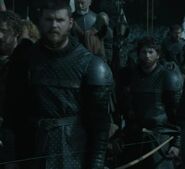 In the A Song of Ice and Fire novels, House Mormont is a stalwart supporter of the Starks. According to legend, King Rodrik Stark won the island in a wrestling match (presumably with the ironborn lord who held the island at the time) and appointed the Mormonts to rule there.

Bear Island is beautiful, but also icy, cold and remote. The Mormont "castle" is a large, comfortable but still relatively primitive wooden longhouse (due to a lack of stone on the island). Bears still prowl the woods of the island, giving the Mormonts their sigil. The people of Bear Island are fierce, hardy and strong. Unlike most of Westeros, the women of Bear Island are trained in the use of weapons and warfare, as they are expected to defend hearth and home should wildling raiders from the Frozen Shore (just to the north) launch an attack.

Lord Jeor Mormont ruled the house honorably and with distinction. He chose to 'retire' from the role of lord and took the black, joining the Night's Watch and rising rapidly through their ranks until he became Lord Commander, a rank he held until his death. Jeor felt able to do this as his son Jorah had proven to be a great warrior, winning immense honors during the Greyjoy Rebellion and the following tourney. Lord Jorah proved an effective ruler for several years, until he disgraced himself in an incident involving slavers. Lord Eddard Stark stripped him of his title and lands and Jorah fled to the Free Cities rather than face justice. Jeor's younger sister Maege became the ruling Lady of Bear Island the head of House Mormont, to Jeor's disquiet. However, as members of the Night's Watch serve for life he was unable to return to Bear Island to resume his former rule.

Lady Maege Mormont has since proven to be a strong and effective ruler of the House.

Dacey Mormont is the eldest of Maege's five daughters and a proud warrior in her own right. She serves as one of Robb Stark's personal guard throughout the War of the Five Kings. Dacey is slain at the Red Wedding: she was one of the few Stark bannermen who survived the initial attack by the Frey crossbowmen, and managed to fend off another attacker by smashing a flagon of wine in his face. She ran across the hall to the door but just as she was about to reach the exit, a dozen Frey men-at-arms burst through the door in front of her led by Ryman Frey, who drove a longaxe into her belly.

In the novels, it is unknown if Maege Mormont is still alive, because she was not at the Red Wedding. Before going to the Twins, Robb sent her and Galbart Glover ahead to the crannogmen of House Reed beforehand to prepare them for an assault to retake Moat Cailin. Her fate is unknown, except that two of her daughters are with her.

Lyanna Mormont's reply letter to Stannis is the same in the novels. Jon Snow wonders why the ten year old Lyanna wrote it, however, given that she has three surviving elder sisters (it is possible the Mormonts let her write it to scorn Stannis). The answer is given by Alysane, Maege's second daughter, who tells Asha while marching to Winterfell that "Lyra and Jory are with our mother" - thus Lyanna is by default the acting "Lady of Bear Island", while her mother and sisters are away, similar to how Bran Stark was the acting "Lord of Winterfell" in Season 2 when his older brother Robb was not physically present to rule.

Some time after sending the rejection letter, the Mormonts change their mind about supporting Stannis: an armed Mormont force led by Alysane appears unexpectedly while Stannis attacks the ironborn at Deepwood Motte, and assists him to liberate the castle, as he writes Jon afterwards. House Mormont, alongside other northern houses, swears fealty to Stannis and joins the march to Winterfell. Alysane is later assigned as one of the guards of Asha Greyjoy.

Retrieved from "https://gameofthrones.fandom.com/wiki/House_Mormont?oldid=398422"
Community content is available under CC-BY-SA unless otherwise noted.