View source
watch 01:40
The Sandman Will Keep You Awake - The Loop
Do you like this video?
Play Sound

A black moose's head on an orange field

Lord of the Hornwood

House Hornwood of Hornwood is a vassal house that holds fealty to House Stark of Winterfell. Their lands are southeast of Winterfell, located in a forested region. Their stronghold is a castle that is also called Hornwood. The Hornwood lands border the holdings of House Manderly to the south and House Bolton to the northeast.

The Hornwood sigil is a black moose head on an orange field. Their house words are "Righteous in Wrath."[1] They accompanied Robb Stark when he called his bannermen.[2] House Hornwood were also one of the few Northern houses to answer the call of Jon Snow's efforts to retake Winterfell, and subsequently fought in the Battle of the Bastards.

Bran recites the motto of House Hornwood during a lesson with Maester Luwin.[1]

While making plans to retake the North, Jon Snow lists the Hornwoods as one of the houses that have not yet declared for House Bolton, along with the Cerwyns, Glovers, Mormonts, and Mazins. Jon and Sansa decide they must appeal to these lesser houses to gather enough men to face the thousands that support Ramsay.[3] The Hornwoods later agree to join the Starks in taking back Winterfell alongside the Mazins and Mormonts, supplying two hundred men for the reformed Stark army,[4] and participate in the Battle of the Bastards.[5] 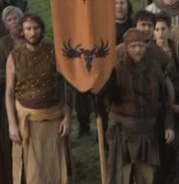 The banner of House Hornwood at the Tourney of the Hand in "The Wolf and the Lion".

A Hornwood banner used in the Battle of the Bastards.

Hornwood cavalry at the Battle of the Bastards

In A Song of Ice and Fire novels, House Hornwood is a loyal vassal of the Starks. House Bolton is said to have designs on their fertile lands.

When Robb Stark summoned his bannermen, Lord Halys Hornwood and his son Daryn went to Winterfell and joined his army. Daryn became one of Robb's personal guards. Both of them were killed in the subsequent battles.

Once Ramsay Snow learned about the death of Halys and Daryn, he kidnapped Lady Donella, raped her, and forced her to marry him and to sign a will naming him the sole heir of the Hornwood lands. Then he locked her in a cell and did not bring her food. When Ser Rodrik Cassel arrived to save her, it was too late: she starved to death after chewing several of her fingers.

In A Dance with Dragons, following the liberation of Deepwood Motte, House Hornwood is one of the northern houses who join Stannis in his campaign against the Boltons.