This article is about the noble house. For the special feature, see: House Dayne (Histories & Lore)

"As a boy, even I dreamed sometimes of being not a Stark of Winterfell, but a Dayne of Starfall. Legend has it that the Dornish founder of House Dayne followed a falling star to where it hit the ground. And there, he raised his castle. A fantastic story, I know, but House Dayne has a relic to prove it. Dawn. The most famous sword in Westeros."
―Eddard Stark[src]

House Dayne of Starfall is a noble house from Dorne and a vassal to House Martell. Their seat is the castle of Starfall. They were once minor kings, styling themselves as Kings of the Torrentine.

Their ancestral weapon is Dawn, a blade forged from the metal of a fallen star. The Dayne knight that bears the sword is granted the title of "the Sword of the Morning".

House Dayne's sigil consists of a black sword within a falling star on a blue field.

House Dayne can trace its roots back to the Dawn Age. Starfall is built on an island at the mouth of the Torrentine River, where the first Dayne is said to have tracked a falling star and found a magical stone.[1] In present-day Westeros, House Dayne is best known for their ancestral sword, Dawn, and the "Sword of the Morning" who wields it.

Although considered "stony" Dornishmen, who possess fairer coloring than the rest of the Dornish population, the Daynes' appearance is different even from this exclusive group; many have blue or purple eyes, and hair color ranges from dark to pale blond.

House Dayne fought several battles with Houses from the Reach. King Vorian Dayne was defeated by House Martell in Nymeria's War, though because of his honor, Nymeria sent him to the Wall with golden fetters and married his heir, Davos Dayne. Since then, House Dayne has been fiercely loyal to House Martell. They assisted the Martells in unifying Dorne and subduing other Dornish Houses. During Aegon I Targaryen's War of Conquest, Lord Joffrey Dayne led an army to Oldtown.[2]

The Martells and their vassals rallied behind the Targaryens in Robert's Rebellion. The legendary knight Arthur Dayne was killed in the Skirmish at the Tower of Joy, one of the last battles in the war. Although killing or disarming all of his opponents with ease, he was stabbed in the back by Howland Reed, whom he thought he had mortally wounded early in the fight, and subsequently killed by Eddard Stark.[3] Dawn was subsequently returned to Starfall by Eddard.

Ser Arthur Dayne's entry in The Book of Brothers displays the sigil of House Dayne.

The shield of House Dayne based on the sigil shown in the The Book of Brothers in Season 4.

The shield of House Dayne based on the sigil shown in the Season 5 Histories & Lore featurette. 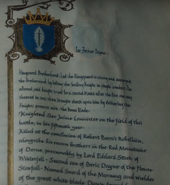 Ser Arthur Dayne's entry in The Book of Brothers in Season 8, with yet another version of the sigil of House Dayne.

In the A Song of Ice and Fire novels, members of House Dayne are Stony Dornishmen, whose characteristics mostly resemble the rest of the Seven Kingdoms in look, customs, and traditions (being composed of the same First Men/Andal mixture). Unlike the rest of the more Rhoynish-looking Dornishmen, however, they have pale skin with hair ranging from dark brown to pale blond and they often have violet eyes, though according to George R.R. Martin they are not of Valyrian descent.[4]

In the novels, the House sigil is different than in the show: it depicts a silver sword and a falling star crossed sideways on a violet-colored background.