A red stallion on a gold field.

Lords of the Stone Hedge

"The red stallion was always a welcome sight at Riverrun. My father counts Jonos Bracken amongst his oldest and most loyal bannermen."
―Catelyn Stark[src]

House Bracken of Stone Hedge is a noble house of the Riverlands. Their lands are in the heart of the Riverlands, located along the banks of the Red Fork of the Trident. Their seat is known as Stone Hedge, ruled by the Lord of the Stone Hedge. Their current lord is Jonos Bracken. Their sigil is a red stallion on a gold field.

The Brackens hold an ancient grudge against their neighbors, the Blackwoods of Raventree Hall. The two houses, both of which have the blood of the First Men in their veins, competed for the throne of the Riverlands when it was an independent kingdom. The enmity and competition continue to this day and was increased when House Bracken converted to the Faith of the Seven.[1]

At the Inn at the Crossroads, Catelyn asks for the assistance of a man-at-arms of House Bracken in taking Tyrion prisoner. The man, Kurleket, agrees to aid her. She tells him that her father counts Lord Jonos as one of his most loyal bannermen.[2]

The banner of House Bracken flies at the tourney of the Hand in King's Landing. Kurleket is killed in a clash with the hill tribes on the eastern edge of the Vale of Arryn.[3]

Lord Jonos Bracken joins the army of Robb Stark as it crosses the Riverlands, following the victory Whispering Wood. As Robb, the Northern lords, and the Riverlords debate a course of action, Bracken suggests declaring for Renly, to which Robb refuses as Renly is second-in-line to his older brother, Stannis. After Greatjon Umber interrupts and suggests they crown Robb as the King in the North, Bracken joins the Northern lords and his fellow Riverlords in proclaiming Robb their king and seceding their lands from the authority of the Iron Throne.[4]

With the intended betrothal of Wyllis Bracken to Lollys Stokeworth, House Bracken has apparently surrendered to the Iron Throne in the aftermath of the Red Wedding.[5]

The banner of House Bracken at the Tourney of the Hand in "The Wolf and the Lion".

Tyrion Lannister defends himself using the shield of a fallen man-at-arms of House Bracken on the road to the Eyrie. Promotional image from "The Wolf and the Lion".

The Bracken sigil in the HBO Season 1 viewer guide. 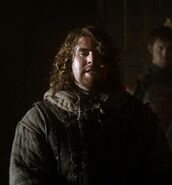 In the A Song of Ice and Fire novels, House Bracken is a loyal vassal of the Tullys. The enmity between Brackens and Blackwoods was radically exacerbated when Ser Otho Bracken slew Lord Quentyn Blackwood in a tourney accident roughly a century ago, and it still exists at present - even when the two houses were temporarily on the same side at the War of the Five Kings.

The sigil of House Bracken is slightly different in the books: like the TV series, it consists of a red stallion on gold, however, in the books the outside edge of the gold field also has a brown border - though it was briefly shown surmounting a brown escutcheon at the tournament in Season 1.

House Bracken suffers a lot during the war: the Mountain steals its harvest, burns everything he cannot carry off, puts Lord Jonos's castle to the torch and rapes one of his daughters. Yet, following the Red Wedding, House Bracken yields to the Iron Throne, since Lord Jonos (similarly to many of the Riverlords) figures there is no point to keep fighting for a lost cause.

After receiving a pardon, Lord Jonos besieges Raventree Hall, the castle of his nemesis Lord Tytos Blackwood, on behalf of the Iron Throne. Since the rivalry between the Blackwoods and Brackens goes back thousands of years, neither side asks for a parley. Eventually, Jaime arrives and persuades Lord Tytos, non-violently, to surrender.

With unspecified familiar relationship to the main branch of the house there is also: