This article is about the noble house. For the special feature, see: House Baelish (Histories & Lore)

A black mockingbird on a yellow field

The Vale of Arryn
The Riverlands

"Once, House Baelish had no lands, no name and no gold. Now, we have quite a lot of each. What new rung will the next generation climb? Let us not be hasty. I am not finished yet."
―Petyr Baelish[src]

House Baelish of Harrenhal is an extinct noble house that held fealty to House Arryn of the Vale. They ruled Harrenhal and an unnamed castle in the smallest of the Fingers.

Petyr Baelish, called "Littlefinger", was the only living member of the House at the beginning of the fourth century. Therefore, his personal sigil has come to be used as the House's main heraldry: a seemingly innocuous black mockingbird on a yellow background.

House Baelish began with Petyr's great-grandfather, a common sellsword from Braavos who traveled to Westeros to take up service with House Corbray in the Vale of Arryn. The sellsword's son, Petyr's grandfather, was a poor wandering hedge knight, who managed to earn a minor lordship - the most minor of lordships, just a few stony acres in the smallest peninsula of the Fingers, with a small keep to reside in.[1]

Petyr's father fought in the War of the Ninepenny Kings, the preemptive assault on the forces of Maelys Blackfyre, the last of the Blackfyre pretenders, before they could invade Westeros. During the conflict Petyr's father served well under Lord Hoster Tully. Through their good relationship, Hoster agreed to foster his son Petyr at Riverrun, a great honor for a lesser House.[1]

Petyr went to Riverrun when he was eight years old, and befriended Hoster's daughters Catelyn and Lysa Tully. Their brother Edmure mockingly nicknamed him "Littlefinger", in reference to his short height at the time and the location of his minor landholdings. Petyr became smitten with Catelyn but she never returned his affections. Lysa, however, was infatuated with Petyr, but he only loved Catelyn. Eventually when she was betrothed to Brandon Stark, heir to House Stark, Petyr challenged him to a duel, thinking he could win Catelyn's affection through pluck and courage - he was promptly overpowered and nearly killed, though Catelyn begged Brandon to spare his life. Embittered, Petyr was cast out of Riverrun and returned to the Vale. During the course of Robert's Rebellion, however, Brandon was killed by the Mad King and Catelyn married his younger brother Eddard Stark, while to secure a political alliance Lysa was wed to Jon Arryn, ruler of the Vale. Manipulating Lysa's infatuation with himself, Petyr ingratiated himself into Jon's services, first as customs officer at Gulltown, where he increased the port's revenues tenfold. Seeing Littlefinger's financial acumen, Jon was easily convinced by Lysa to later bring Littlefinger to the royal court at King's Landing, and make him Master of Coin.[1]

In charge of the crown's treasury, Littlefinger rapidly grew into a powerful player of royal politics, and a master of court intrigues. Of an older mindset, few viewed Littlefinger as a threat, seeing only that he was a man from a very minor House, with no distinguished lineage, significant landholdings, or armies. Instead, Littlefinger based his newfound power on money.[1]

Since Littlefinger had no offsprings, his House became extinct at his demise.

In the A Song of Ice and Fire novels, Petyr is the only living member of House Baelish, though he is so poor that he gained all of his current wealth due to his own career as a treasurer. Petyr's great skills with numbers and banking led him to become the tax and revenue collector for Gulltown, the principal city of the Vale. At Lord Jon Arryn's suggestion, King Robert Baratheon later made Petyr his Master of Coin for the whole realm, a role he continues to serve in until he is sent back to the Vale to enter into a profitable marriage-alliance with Lysa Arryn.

The sigil of House Baelish is – or was – the grey stone head with fiery eyes of the Titan of Braavos, on a light green field. It was chosen by Petyr's grandfather when he was knighted, because his own father was from Braavos. However, the current lord of the House (Littlefinger) prefers to use his personal mockingbird sigil exclusively. Since he is the only living member of the House, the mockingbird sigil has functionally replaced the original. In the books, Littlefinger's personal heraldry actually consists of a field of multiple silver mockingbirds on a green plain.

Petyr rarely returns home, leaving the keeping of his minor towerhouse to a small staff. The original lands of House Baelish are so meager that their towerhouse doesn't even have a formal name, and it is so small that it doesn't have a maester assigned to it.

The only real benefit Petyr received from being born into House Baelish is that it technically made him a member of the minor nobility, thus allowing his initial entry into court life. Petyr downplays his partial descent from the Free Cities of the east, even abandoning the use of the original sigil of House Baelish, displaying the Titan of Braavos, to his own personal sigil featuring a mockingbird. Thus, it is somewhat ironic that he criticizes Varys for being from the Free Cities. 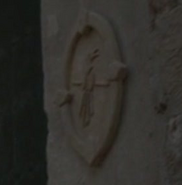 The mockingbird sigil outside the brothel owned by Petyr Baelish in "Two Swords".

The unnamed keep of House Baelish.