In use as a domesticated animal throughout both Westeros and Essos

Horses are four-legged mammals which have been domesticated throughout the Known World for use as beasts of burden, mounts in war, or simply for transportation.

Horses are prominently used as war mounts by the armored knights of Westeros, whose heavy horse charges can devastate many times their number of infantry.

There are some farmers in the Gift who breed horses for the Night's Watch.

In the desert climate of Dorne in southern Westeros, the Dornishmen have developed a unique breed of horse: the Dornish sand steed. They are splendid beasts that can run for a day and a night without tiring. A knight wearing full metal plate armor would bake in the hot desert sun, so Dornishmen wear only light armor, and thus their horses are bred for extreme stamina instead of strength.

In Essos, the Dothraki mounted hordes of the central plains center their entire culture and society around their horses. They sweep across the plains in large clans called khalasars, which can include tens of thousands of riders and their horses. Unlike the knights of Westeros, the Dothraki favor fast, unarmored cavalry, allowing for lightning-fast strikes and greater mobility.

Even the White Walkers from the lands far Beyond the Wall in Westeros have been observed riding undead wight-horses that they have resurrected.[1] 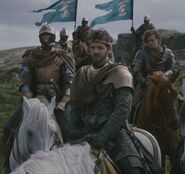 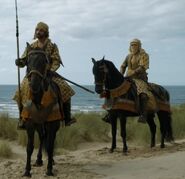 Dornish Sand Steeds
Add a photo to this gallery

Horses are ubiquitous in the medieval societies present in the A Song of Ice and Fire novels. Only a few cultures do not rely prominently on horses, often due to an island location. The Iron Islands in particular make little use of horses, instead traversing their islands in boats, though they do have a least a few horses on the isles for basic transport. The ironborn do not make use of horses as mounts in warfare. Similarly, horses are uncommon in the Free City of Braavos, because it is a city of canals (somewhat like Venice or Bruges in real life) spread out across many small islands linked together by bridges. In the Free City of Volantis, the inhabitants prefer to use a species of dwarf elephant (which lives in its warmer southern climate) to draw carts, which fill the city. Normal large elephants are also not uncommon in Volantis, though horses can also be seen there.

Horses are rare Beyond the Wall due to the harsh climate making it difficult to support them, but a few characters such as Tormund mention that they have ridden horses. Still, the wildlings have so few horses that their war bands mostly operate on foot. The Giants, however, ride Mammoths.

Daenerys's silver did not die in the Red Waste in the books, but continues with her to Slaver's Bay. When Daenerys does obtain the Unsullied in Astapor in the TV series, she acquires a new, similar silver horse without explanation.

Jaime does not name any of his horses, since he has seen too many die in battle, and this is harder when they are named. He is amused, though, that his squire Lewys Piper starts calling his palfrey and destrier "Honor" and "Glory", and lets the names stand.

The books give considerably more detail about what specific types of horses are ridden by different characters, based on the historical terms for the use of horses in warfare, not classified precisely by breed but by appearance and purpose:

A particular breed of horse in the narrative somewhat equivalent to the Arabian horse is the Dornish sand steed: intended as war horses, but bred for stamina instead of strength, meaning that they cannot support the weight of a fully armored rider. Due to Dorne's desert climate, the style of warfare used by the Dornishmen developed differently from the rest of Westeros. Armored knights riding heavy armored horses would quickly bake in the desert sun and suffer from thirst. Warfare in Dorne therefore developed to center around light, fast attacks by smaller numbers, so that they will not overheat or exhaust the available water supply. At most, a Dornish rider would only wear light armor, thus Sand Steeds are not required to support this much weight. Sand Steeds are smaller and narrower than normal warhorses, slim even compared to palfreys (also bred for stamina), but are very graceful. Famed for their stamina, Sand Steeds can run a day and a half without tiring.

The Jogos Nhai nomads, who live in the plains north of Yi Ti, ride bizarre horse-like animals called "Zorses". They are rarely encountered in Westeros or even the Free Cities. Several members of the Brave Companions sellsword company ride zorses, and when they take Tywin Lannister's contract to come to Westeros to fight in the War of the Five Kings, they bring their unusual mounts with them. The World of Ice and Fire sourcebook made clear that zorses are not real-life zebras; rather, the Jogos Nhai produce them by breeding regular horses with a strange striped horse-like animal from southern Yi Ti (i.e. actual zebras). Zorses are sterile, in the manner of mules. Indeed, in real-life "zorse" is actually the official term for a horse-zerbra hybrid.

Retrieved from "https://gameofthrones.fandom.com/wiki/Horses?oldid=420989"
Community content is available under CC-BY-SA unless otherwise noted.