Game of Thrones Wiki
Register
Don't have an account?
Sign In
Advertisement
in: Ghiscari culture, Legendary and magical creatures
English

Ghiscar
The harpy is a mythical creature in the culture of Essos, whose likeness is used as the symbol of the Ghiscari Empire, as well its colony-cities in Slaver's Bay, where Ghiscari culture survives to this day. The plural form is "harpies".

Harpies are shown as having the head and torso of a woman and the wings, tail, and legs of a bird.

Harpies are shown prominently in the city of Astapor on Slaver's Bay. A great statue of a harpy can be seen on the walls of Astapor overlooking the bay.[1] The harpy of the Astapori flag is depicted holding, between her talons, a chain with open manacles on both ends.[2]

An enormous statue of a harpy, located at the top of the largest and tallest pyramid, dominates the skyline of Yunkai.[3][4]

A huge bronze harpy lies at the apex of the Great Pyramid of Meereen.[5]

During the Siege of Meereen, as the local slave population rises in arms against the Great Masters, an enormous black banner with the three-headed red dragon of House Targaryen is draped over the harpy by dissidents. After the revolt is victorious and the city falls to Daenerys Targaryen, she takes up residence in the Great Pyramid. The Queen's private residence lies at the very top, just below the Harpy.[6]

The Unsullied pull down the harpy statue on top of the pyramid to signify that the days of the Masters' rule are gone.[7]

The harpy of Astapor, as shown in the title sequence.

A harpy statue from the city of Old Ghis as depicted in the Complete Guide to Westeros.

The statue of a harpy seen from a distance.

The harpy of Astapor is traditionally depicted holding a chain with open manacles between its talons.

The whip the Good Masters use to control the Unsullied, with a handle shaped like a harpy.

Concept art of the Unsullied whip. 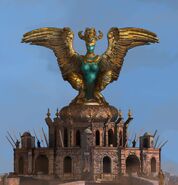 In the A Song of Ice and Fire novels, the harpy is the ancient sigil of the Ghiscari Empire, described as having a bat's wings, an eagle's talons, and a scorpion's tail. On the Ghiscari flag, the harpy is shown clutching a thunderbolt in its talons. Valyria destroyed the Ghiscari Empire and conquered its lands, but after the Doom of Valyria Ghiscari culture reasserted itself. The nation of Ghiscar, expanding from the island city of New Ghis, bears the harpy on its flag.

The city-states of Slaver's Bay (Astapor, Yunkai and Meereen), although not subject to the new Ghiscari kingdom of New Ghis, are Ghiscari in culture and origin and also employ the harpy as their sigil. The Astapori harpy holds a chain with open manacles, the Yunkish harpy holds a whip and an iron collar, while the Meereenese harpy holds nothing.

The TV series depicts harpies with bird's wings and tail, keeping them closer in design to the harpies of real-world Greek mythology than the bat-winged harpies of Ghiscari mythology described in the books.