Game of Thrones Wiki
Register
Don't have an account?
Sign In
Advertisement
in: Religion, Culture and society, Old Gods of the Forest
English

Godswoods are wooded sanctuaries, enclosed within a castle's walls, that have been set aside as places of worship and meditation dedicated to the Old Gods of the Forest. They are centered around a single heart tree, usually a weirwood tree with a face carved into the trunk.

One such godswood is located in Winterfell.[1][2]

The Red Keep also has a godswood but, being a rather recent castle, it has no weirwood tree.[3] 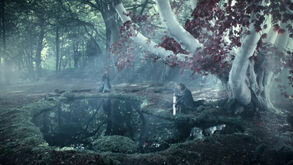 The Godswood at Winterfell. 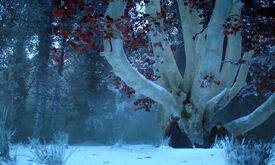 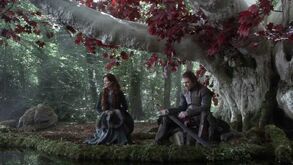 Ned and Cat in Season 1 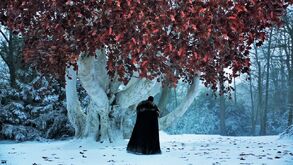 Jon by the tree in Season 8

It is said that each castle in the North has a godswood inside its walls.

Before the Andal Invasion, all of the castles of the First Men in southern Westeros had godswoods in them. After the Andals conquered the south they took over many of these castles, a large number of which are still standing today (particularly in prominent regional capitals such as Riverrun, Casterly Rock, Storm's End, and Highgarden, to name a few). While the Andals replaced the worship of the Old Gods with their Faith of the Seven, most of them kept the godswoods in these ancient castles (possibly because outright destroying them would have greatly angered the First Men they had conquered). To this day, there are still godswoods in southern castles such as Riverrun or Highgarden, but they have been converted into secular gardens instead of active religious centers. Even King's Landing has a godswood. The only godswoods still in active religious use are those in the North (such as at Winterfell), or the handful of noble families in the south that still worship the Old Gods, such as House Blackwood in the Riverlands.

When Stannis Baratheon converts to the religion of the Lord of Light, he not only burns the idols of the Seven on Dragonstone, but also destroys the godswood in Storm's End as a sacrifice to the Lord of Light.