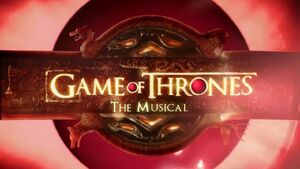 Game of Thrones: The Musical is a twelve-minute sketch produced by the British rock band, Coldplay. It originally aired as part of a three-hour NBC special, bringing together different actors and musicians who used their talent to persuade people to donate to charity for Red Nose Day. The sketch features members from Coldplay participating with several actors from Game of Thrones in producing musical numbers, and is narrated by Liam Neeson.

In the satirical behind-the-scenes portions of the video, the cast's reaction towards the concept of a musical are portrayed as mixed. Iwan Rheon and Mark Addy are the only actors who turned up on the first day. While Rheon expresses surprise, Addy (as well as Diana Rigg and Emilia Clarke) denounce it as a terrible idea (and express disappointment that Sean Bean is absent). Difficulties lead to Addy leaving the set. That night, Kit Harington appears, making him and Rheon the only actors present.

News of the musical's success spreads and Peter Dinklage, Nikolaj Coster-Waldau, and Emilia Clarke also take part, the latter of which seemingly changing her mind from her initial position and saying that she has always known that it would be a triumph. Though the musical is completed, at the end of the skit series creator George R. R. Martin appears and is so disappointed with the final product that he announces he will refuse to allow the musical to be released.

Game of Thrones: The Musical gathered over $21 million in charity donations and over 30 million views on YouTube.[1]

Retrieved from "https://gameofthrones.fandom.com/wiki/Game_of_Thrones:_The_Musical?oldid=348488"
Community content is available under CC-BY-SA unless otherwise noted.