View source
watch 01:00
Game Of Thrones: Season 3 - The Beast Preview Trailer
Do you like this video?
Play Sound

February 18, 2014
The third season of Game of Thrones was commissioned on April 10, 2012, following a major increase in audience figures between the first two seasons.[1] It consists of ten episodes and began filming on July 10, 2012.[2]. It concluded filming on November 24, 2012.[3] David Benioff and D.B. Weiss returned as executive producers and showrunners.[4]

Season 3 of Game of Thrones was released on DVD and Blu-ray in the United States on February 17th, 2014. The set includes all ten episodes of the season and a number of extra features.[12]

HBO announced the release date for the media release considerably earlier than normal, offering fans a chance to vote for alternate packaging designs on their Facebook page.[13] In addition to the standard edition, fans could choose between a repeat of the alternate packaging from Season 1, featuring the sigils of Houses Stark, Lannister and Targaryen; character-based images, featuring Tyrion Lannister, Jon Snow and Daenerys Targaryen; or a new set of house sigils, featuring House Baratheon (as led by King Stannis), House Tully or House Tyrell.[14] 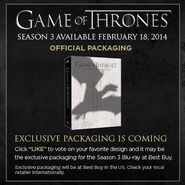 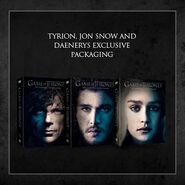 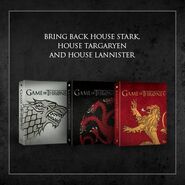 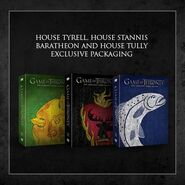 The season generally follows the third novel A Storm of Swords, and also consists of scenes based on the second, the fourth and the fifth novels.