Start a Wiki
watch 02:38
The History of Dragons in Westeros
Do you like this video?

Drogon is one of the dragons born in the Dothraki Sea, along with Viserion and Rhaegal. He is named after Daenerys' late husband Khal Drogo. He is distinguishable by his black and red colored scales, and red-black wings, he is also the largest and most aggressive of the three hatchlings.

Drogon is slightly larger than his siblings. Most of his scales are black, shadowing a red ones that run down his back and neck. His wings and frills are black-red mix, down to the wing-bones which are black. His eyes are orange red. Over the course of the series he has grown considerably, from being the size of a kitten in season 1 to the size of a large lion in season 4.

Drogon is the least shy of the three dragons when it comes to interacting with humans, albeit for the worst. He is by far the most aggressive of the three, easily agitated and quick to anger, as seen when he snarled at a Yunkai wise master when he approached his mother. He is also the first to react to orders and takes the initiative in confrontations, as seen when Daenerys ordered her dragons to burn Pyat Pree or when the Wise Master threatened her, he was the first to jump to his mother's defense. He often seeks his mother's affection, and is often seen being caressed by her, however, even she isn't safe from his anger, as seen when he snarled at her without warning when she tried to diffuse a conflict between the three. His larger size also makes him take a dominant role among his siblings, shown in how easily he stole a lamb from Viserion and Rhaegal, the latter two not daring to fight but instead squealing for him to share.

He is born along with his two siblings after Daenerys has their eggs placed on the funeral pyre erected for her deceased husband, Khal Drogo. As she rises unharmed from the ashes of the pyre on the morning following the funeral, he climbs on her shoulder and lets out a powerful scream, announcing the return of dragons to the world.[1]

As her small khalasar travels east, Daenerys tries to get Drogon to eat, but he refuses the raw meat she offers, just as his siblings do.[2] Later, while Daenerys is staying at Qarth, she teaches Drogon to breathe fire for the first time, roasting a small piece of meat, which he then eats.[3] Drogon and his siblings are kidnapped to the dismay of Daenerys.[4] In a meeting with the Thirteen, Pyat Pree, a warlock, reveals he has taken them to the House of the Undying and claims that he is eager to reunite Daenerys with her children.[5]

Drogon has grown significantly since leaving Qarth, and is about the size of a small dog by the time Daenerys and her party reach Astapor. He swoops into the water and catches a fish, which he proceeds to cook in mid air and devour. Daenerys notes that he is not growing fast enough for her to use him to conquer the Seven Kingdoms in the immediate future.

At the slavers bay, she speaks with Kraznys mo Nakloz, as they attempt to work out a deal for his slave soldiers, the Unsullied. Daenerys says she will take all eight thousand Unsullied, including those in training. To this Kraznys laughs at her and says with everything she came with she could afford hardly over one hundred Unsullied. Daenerys surprises him by reminding him she has Dragons, and she will give him one. They strike a deal that she may have all the Unsullied, as well as those still in training, in exchange for her biggest dragon.

Sometime later the exchange is made, Daenerys meets with the Good Masters and gives the chained Drogon over to Kraznys, who in turn gives her the golden scourge which signals absolute authority over the Unsullied. Once the Unsullied are under her command, Kraznys comments that Drogon does not obey him, to which she responds, in Valyrian, that he does not obey because dragons are not slaves, before ordering Kraznys's death with a harsh "dracarys". Drogon then takes flight and strafes the guards and Good Masters in the walls above the plaza.

After the Sack of Astapor is finished, Daenerys' khalasar and her new Unsullied army march out of the city, Drogon and his brothers flying overhead.

Drogon and his brothers are present in Daenerys' tent when a Wise Master from Yunkai arrives to entreat with their mother. Drogon aggressively barks at the Master when he gets to close to Daenerys. Later the Slave Master has two slaves place a chest full of gold near Drogon. While the two talk Daenerys throws a piece of meat to Viserion, and Drogon attempts to steal it from his brother. When the negotiation goes sour, Drogon growls at the Slave Master for threatening Daenerys. Scared for his safety, the Slave masters tells his slaves to take back the gold and attempt to leave, Drogon stops them in their tracks, hissing and growling.

Drogon and his siblings are now the size of small horses. He quietly rests his head on his mother's lap, taking joy as she caresses him. When his two siblings come back with a dead lamb, he joins the fight over the carcass. His mother tries to calm him down, and without warning, Drogon snaps at her with a hiss; a warning to not interfere. He then roars and goes to contest the kill. Daenerys is shaken that she is losing influence over her "children", as dragons can never be truly tamed.[6]

Drogon, who is now the size of a small ship, kills and eats the goats of a local goatherd outside Meereen. The goatherder lays the charred bones of his flock before Daenerys in Meereen, hoping he has not angered the new queen and that this was the punishment. Daenerys apologizes for Drogon's actions and promises to pay the goat herder back three times the worth of his lost goats.[7]

Dany is dismayed to learn that Drogon has killed the daughter of a goatherd. She tearfully confines the two smaller dragons to the catacombs of the pyramid while Drogon remains at large, having last been seen over the Black Cliffs.[8]

Drogon traveling through the Red Waste

Drogon being put in his cage

Drogon and his siblings

Daenerys uses her dragons to intimidate the Wise Masters

Drogon aggressively hisses at a Wise Master envoy from Yunkai 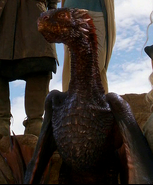 A growing Drogon awaits for her mother's instructions.

Drogon, now a massive sub-adult, towers over a peasant.
Add a photo to this gallery

In the A Song of Ice and Fire novels, Drogon is much the same. He is the largest and most aggressive of Daenerys's dragons. She named him in memory of her recently deceased husband, Khal Drogo.

Balerion the Black Dread, the dragon of Aegon the Conqueror, was also colored black with red highlights. Generations later, Daenerys Targaryen thinks that her newly hatched dragon Drogon resembles descriptions of Balerion so closely that he is actually a reincarnation of Balerion's spirit, though she gives him a new name for his new life.