Game of Thrones Wiki
Register
Don't have an account?
Sign In
Advertisement
in: House Bolton, Locations in the North, Castles of the North
English

"Let me send word to my bastard at the Dreadfort."
―Roose Bolton to Robb Stark[src]

The Dreadfort is a castle situated in the North. It was the seat of House Bolton, located on the banks of the Weeping Water east of Winterfell. The Dreadfort is ill-omened as the stronghold of House Bolton, who are famed for the flayed skins of their enemies, often rumored to have been kept on display in the castle, including those of several ancient Stark kings. However, if such gruesome trophies ever did exist they have long since been removed or destroyed.[1][2]

House Bolton of the Dreadfort had a long history of dissent and rebellion, to the point where they became known as the "Bane of the North".

Word of Winterfell's capture by Theon Greyjoy reaches the Dreadfort's garrison. This news is then relayed to Roose Bolton via messenger ravens.

After being betrayed by his crew and delivered to Ramsay Snow, Theon Greyjoy is imprisoned in a torture chamber at the Dreadfort. Over the course of several months, he is subjected to a number of horrific tortures, both physical and psychological.

Yara Greyjoy leads an assault on the Dreadfort to rescue her brother. The assault ends in failure when Yara and her fellow ironborn cannot convince Theon, now "Reek", that they are his rescue party. Ramsay, the Bastard's Girls, and his fellow Dreadfort men-at-arms repel the ironborn raiders.

Following the Surrender of Moat Cailin, the Boltons take Winterfell - the traditional capital of the North - for their new seat, leaving The Dreadfort in the hands of a handful of Bolton men and a Castellan.[3] Presumbly Roose planned on giving the Dreadfort to his and Walda's child while Ramsay's child would get Winterfell.

Following the deaths of Roose Bolton, Walda Bolton, and their newborn child at the hands of Ramsay Bolton, the Dreadfort passed to Ramsay. Not long after, however, Ramsay was defeated (and nearly beaten to death by Jon Snow) at the Battle of the Bastards, and then fed to his own hounds by his wife Sansa. Thus, with House Bolton having been cast down and extinguished, the Dreadfort has no current lord.

It is unknown who currently occupies the Dreadfort. If there was a Bolton garrison holding the castle, it was presumably destroyed by the army of the dead during its advance towards Winterfell. 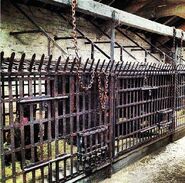 One of the Dreadfort's guard towers.

The Dreadfort as it appears in the opening titles.

Myra Castle in County Down, Northern Ireland serves as the exterior of the Dreadfort in the fourth season.[4]

In the A Song of Ice and Fire novels, the Dreadfort has a similar history of dissent and rebellion. Three centuries after the founding of Karhold, the Starks finally crushed the Boltons in a war that saw the Dreadfort besieged for two years.

The Dreadfort is a strong fortress, with high walls and triangular merlons that look like sharp stone teeth. It has thick stone walls and massive towers. Its great hall is dim and smoky, with rows of torches grasped by skeletal human hands jutting from the walls. Long tables stand before a dais with a high table. The hall has a vaulted ceiling and wooden rafters turned black from smoke.