"With the loss of four dragons, Rhaenyra's only advantage was fading. Luckily for her, over the centuries House Targaryen had spilled more than blood on Dragonstone. She promised gold and titles to any of the Targaryen bastards who could tame the six unclaimed dragons on the island. These bastards were called the "dragonseeds", though most were called "supper"."
―Viserys Targaryen[src]

The Dragonseeds were bastards born to members of House Targaryen.

Following the loss of four of her dragons in the Dance of the Dragons, Rhaenyra Targaryen sought out the bastards of House Targaryen on Dragonstone. She promised gold and titles to any who could tame the six unclaimed dragons on the island. While most of them were eaten by the dragons, four of them managed to tame a dragon each once they were sated or bored and rode them as they fought for Rhaenyra's cause.

When an army of Green loyalists marched up the Reach and began sacking Tumbleton, Rhaenyra sent Ulf the White and Hugh Hammer to defeat them. Ulf and Hugh rode to the city on their dragons Silverwing and Vermithor respectively, but instead of laying waste to Rhaenyra's enemies they betrayed her, burning the city and the Black forces within. They then drank and whored with the Greens to celebrate the victory.

As a result of this betrayal, Rhaenyra no longer trusted Nettles, the girl who had been hunting Aemond Targaryen in the Riverlands with Rhaenyra's husband Daemon Targaryen, and demanded that her head be sent to her. However, Nettles had become Daemon's lover, and Daemon ordered her to leave on her dragon Sheepstealer, which she did.[1] 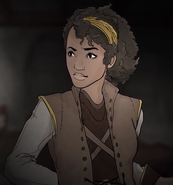 Hugh Hammer
Add a photo to this gallery

In the A Song of Ice and Fire novels, "dragonseeds" was a term used to describe bastards of House Targaryen and House Velaryon. They were often born as a result of the "first night" custom, which was not as resented on Dragonstone as it was in many other parts of Westeros due to the fact that many of the smallfolk viewed the Targaryens as gods. Women whom the Lord of Dragonstone impregnated were even seen as "blessed" and the children born of these unions were often given lavish gifts by their fathers. The practice continued even after it was outlawed by King Jaehaerys I Targaryen.

During the Dance of the Dragons, Rhaenyra Targaryen recruited several dragonseeds at the suggestion of her son Prince Jacaerys Velaryon. Following the betrayal of Ulf the White and Hugh Hammer in the Sack of Tumbleton, Rhaenyra no longer trusted any of the dragonseeds and demanded their arrest, with the exception of Nettles whom she wanted executed. Other dragonseeds included Silver Denys and the brothers Addam and Alyn Velaryon.

Retrieved from "https://gameofthrones.fandom.com/wiki/Dragonseeds?oldid=392452"
Community content is available under CC-BY-SA unless otherwise noted.