Lords of Highgarden
Lords Paramount of the Reach

King of the Andals and the First Men

Bronn's house of Highgarden is a newly formed Great House of Westeros. It rules over the Reach, a vast, fertile, and heavily-populated region of southwestern Westeros, from their castle-seat of Highgarden as Lords Paramount of the Reach after taking control of the region from House Tyrell, following their extinction as a result of the destruction of the Great Sept of Baelor and the Sack of Highgarden.

The house was founded by Ser Bronn of the Blackwater and raised to power as fulfillment of a debt owed by Tyrion of House Lannister, the Hand of the King to the first elected king, Bran I the Broken. The sigil of the house is a flaming arrow, symbolizing Bronn's role during the Battle of the Blackwater. The official name and words of the house are unknown.

Bronn was pledged to wed to Lady Lollys Stokeworth by Cersei, in order to deny Tyrion of any potential champions in his trial for the Purple Wedding,[7] but the arrangement was later broken by Jaime in order to enlist Bronn's aid. Bronn accompanied Jaime to Dorne in an attempt to rescue Myrcella,[8] served Jaime at the Second Siege of Riverrun, and fought at the Battle of the Goldroad.[9] Bronn sought a castle and a noble lady as a wife, which Jaime promised him after stripping him of his chance of acquiring the rule of Castle Stokeworth.[10]

After Jaime abandoned his sister, Cersei tasked Bronn with murdering her two brothers for committing treason,[11] promising to give Bronn Riverrun, but Bronn instead negotiated with the Lannister brothers at Winterfell after the Great War ended since he thought that Daenerys had a good chance of winning, threatening to kill them if they didn't follow up on their debts owed to him. Tyrion promised to make Bronn Lord of Highgarden and Lord of the Reach if he spared them and they won the war, to which Bronn agreed.[12]

Bronn's noble house is formally founded when Bronn is raised as the Lord of Highgarden and Lord Paramount of the Reach, thus fulfilling the promises made to him by the Lannisters.[13]

Jerome Flynn's (the actor who plays Bronn) name in the opening credits of Season 8. For characters that have sigils, the image next to them is their house sigil. As such, the sigil next to Bronn (a flaming arrow) could represent the sigil of Bronn's house. As in the books, such a sigil would commemorate Bronn's role in the Battle of the Blackwater.

Close-up of Bronn's sigil from the opening credits. 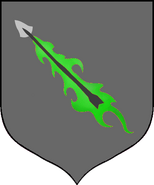 In the A Song of Ice and Fire novels, Bronn has not founded his own house. In fact, Bronn's story in the TV series has taken a major deviation from his story in the books. Bronn is married to Lollys Stokeworth in the books, and thus is a member of House Stokeworth. Ironically, due to Cersei's attempts to dispose of him, he has become Lord Stokeworth in all but name.

House Stokeworth is one of the noble houses of the Crownlands sworn directly to the King of the Andals, the Rhoynar, and the First Men, so Bronn, while elevated to nobility, is far less powerful, certainly not Lord Paramount of the Reach. House Tyrell still rules the Reach, but there are still two forthcoming novels, so it is unknown what their ultimate fate is. However, several noble houses of the Reach, such as the Florents, Rowans, Cranes, Redwynes, Fossoways, or Tarlys boast a claim to Highgarden through their ancient ties to House Gardener.

In the books, Bronn uses a personal sigil to represent himself, which could become his house sigil if he were to found his own house: a green, flaming chain on a smoking grey field, in commemoration of his role in the Battle of the Blackwater.