Blood of My Blood

An old foe comes back into the picture. Gilly meets Sam's family. Arya faces a difficult choice. Jaime faces off against the High Sparrow.

Meera pulls Bran through the snow as he remains in vision-state, but she is clearly getting tired. Bran experiences a rush of visions: King Aerys shouting "Burn them all!"; the Red Wedding, his family, wights in Hardhome, wildfire, dragons, Jaime Lannister and the Iron Throne. Pursuing wights are also seen. Meera cannot go on any further and tries to wake Bran, who comes out of his visions to say "They've found us." She can hear wights approaching through the trees. With no more energy left to pull Bran, and barely enough to draw her sword, she apologises to Bran for failing him, as the wights come into sight.

Just as all appears hopeless, a mysterious rider appears and attacks the wights with a sickle and a flaming flail. Once the wights in the immediate vicinity have been dealt with, he urges Meera and Bran to come with him because "the dead don't rest," and they escape on horseback.

Later, when they have reached relative safety and the rider is preparing a meal, Meera asks why he helped them. The rider reveals he was sent by the Three-Eyed Raven who "lives again" - just as he says this Bran wakes up. The rider reveals himself as a disfigured Benjen Stark, Bran's uncle, and explains that he was stabbed in the gut by a White Walker's sword and left to die, but the Children of the Forest rescued him and stopped the magic that would have turned him into a Wight.

He explains that Bran must now be the Three-eyed Raven, and when the White Walkers come to the realms of men, Bran will be waiting for them.

Sam and Gilly approach Horn Hill, the seat of House Tarly. Sam warns Gilly that they must claim Little Sam is Sam's son, and that Gilly should hide the fact that she is a wildling, since his father abhors wildlings.

Sam introduces Gilly and Little Sam to his mother, Lady Melessa Tarly, and sister, Lady Talla Tarly. In spite of her rough appearance, both immediately notice Gilly's beauty, and Melessa is delighted to meet her first grandchild. Talla tries to tell Sam of her upcoming betrothal, but Melessa shushes her. Talla takes Gilly under her wing, offering her a dress and a spare bedroom.

That evening, they all have dinner along with Sam's father, Lord Randyll Tarly, and brother, Dickon Tarly. Sam reveals his plans to become a maester and eventually return to Castle Black. Randyll criticises Sam for his weight and mocks his attempt to claim hunting and fighting skills, both of which Sam admits can actually be attributed to Gilly and Jon Snow, respectively. Talla is delighted to hear that Gilly can hunt for herself, and suggests that Randyll should be more like Gilly's father, a suggestion which makes Sam and Gilly wince.

Gilly, defending Sam from Randyll's verbal assault, mentions Sam's heroism on three different occasions in which Sam proved himself to be a greater warrior than Randyll will ever be. But in doing so, she inadvertently reveals her origins from North of the Wall. So Randyll doesn't seem to take in her point about Sam's qualities but instead only hears that she is a wildling.

Randyll reveals his prejudice towards wildlings and his contempt for Sam. Melessa, thoroughly angered by Randyll's behavior, declares that Sam isn't the one dishonoring House Tarly, Randyll is. She then storms out, taking Talla and Gilly with her. Randyll eventually agrees that Gilly and Little Sam can stay at Horn Hill; Gilly will work in the kitchens, and Little Sam will be acknowledged and raised as a bastard. However, this will be Sam's last night at Horn Hill, forever.

Sam later apologises to Gilly for not standing up to his father and that he will be leaving at first light. However, he shortly returns to her, declaring that he has changed his mind, and says that they need to stay together as they belong with each other, and that they are all leaving right now. On the way out he takes Heartsbane - the family's Valyrian Steel sword.

Later, Mace Tyrell leads an army through the streets of King's Landing to a waiting Jaime Lannister, before giving a rather pompous speech at which Jaime cringes. Together, they proceed to the Great Sept, outside which the High Sparrow, Septa Unella, the Faith Militant and a large crowd of city folk are preparing for Margaery's Walk of Atonement. The army arrives, along with Olenna Tyrell in a litter, as the High Sparrow is speaking, and Jaime demands he release Margaery and Loras, before they can "be on their way."

The High Sparrow refuses and fends off Jaime's threats to kill all the Sparrows by saying each Sparrow yearns to die in the service of the Gods. After a tense few moments he proclaims it will not be necessary, as there will be no Walk of Atonement. Margaery has already atoned for her sins by bringing another into the faith. To Jaime's astonishment the doors of the Sept open and King Tommen emerges, escorted by his own guards, and walks down the steps to join the High Sparrow and Margaery in a demonstration of unity between the crown and the faith. The crowd burst into cheers after Tommen's speech, demonstrating that the High Sparrow now has the support of both the crown and the smallfolk.

Later, in the throne room, Tommen strips Jaime of his position in the Kingsguard because "an attack on the faith is an attack on the crown," but reveals that Jaime will not have to face imprisonment or humiliation; he can continue to serve his King and the Lannisters, just not in King's Landing.

Jaime later complains to Cersei that he has been ordered to help Walder Frey recapture Riverrun, but instead he intends to find Bronn and whatever killers Bronn can find, to march into the Great Sept and kill the High Sparrow. Cersei says that he should go to Riverrun and show everyone how easily a Lannister can take a castle, as to attack the High Sparrow and his fanatics would probably result in Jaime's death and destroy everything they are working for. She does not need Jaime to be in the city for her trial, it will be a trial by combat and she has the unbeatable Mountain. She reassures Jaime they will still defeat all their enemies, and they kiss.

Arya is watching the second half of the mummers' performance of The Bloody Hand in which the caricature version of Tyrion poisons his nephew and murders his father. She displays amusement at the rendition of Joffrey's painful death, while the crowd watches mournfully. She then seems moved by Lady Crane's performance as Cersei. She notices Bianca (the actress playing Sansa) mouthing Lady Crane's lines, possibly reinforcing Arya's hunch that Bianca is behind the Faceless Men's order for Lady Crane's death.

As the play is finishing, she sneaks backstage and poisons Lady Crane's rum, hesitating before doing so. She is still backstage as the mummers come in, and Lady Crane recognises her as having been in the audience earlier. The two converse and Arya realises she has much in common with the actor. Arya suggests to Lady Crane that Cersei's final speech is out of character to the real Queen Mother – Cersei wouldn't be grief-stricken, she'd be outraged and out for vengeance. Impressed with Arya's insight, Lady Crane compliments her again and asks if she enjoys pretending to be someone else. Apparently uncomfortable at what she has done, or unsettled by the question, Arya makes an excuse that her father is waiting for her and she leaves.

Lady Crane argues with Izembaro about improving the script and just as she is about to drink her rum, Arya reappears and knocks it from her hand. She points at Bianca and warns Lady Crane that Bianca wants her dead before running out. Unknown to Arya, the Waif witnesses this exchange and reports back to Jaqen, asking for permission to kill Arya. Jaqen reluctantly agrees, contemplating it is a shame as Arya had many gifts, and allows the Waif to proceed – but she is not allowed to let Arya suffer.

Meanwhile, Arya retrieves Needle, apparently demonstrating she has forsaken her desire to become a Faceless Man and once more is embracing her destiny as Arya Stark. She hides in a small room, blows out her candle and waits in darkness for the retribution she knows is coming.

At The Twins, Walder Frey receives word that Riverrun is lost, retaken by Brynden Tully. He is flabbergasted, blaming his sons for allowing the Blackfish to escape the Red Wedding. Despite having superior numbers, Lothar Frey and Walder Rivers inform their father that Houses Mallister and Blackwood have risen against House Frey and the Brotherhood Without Banners are rallying the smallfolk and raiding their supply lines and camps. Walder demands that the Tully stronghold be taken back, refusing to be humiliated for failing to hold a castle from rebels. He decides to use his trump card to force their surrender: Edmure Tully, held as a prisoner of the Freys since the Red Wedding. Walder brings him into his hall and jokingly tells his son-in-law to cheer up as he is going home.

In the Dothraki Sea

Daenerys Targaryen is riding with Daario Naharis and her newly acquired khalasar of 100,000. She asks Daario how long it will take to get back to Meereen and inquires how many ships would be needed to carry her army across the Narrow Sea. Daario replies that it will take a week to get back, and at least 1,000 ships to take her new khalasar across the sea. Pondering this, Daenerys tells the khalasar to halt as she rides on ahead on her white horse. After a while, Daario announces he will look for her, but is stopped by the distinctive shadow of a dragon passing overhead. After a moment, Drogon appears and slowly circles the khalasar before landing, revealing Daenerys on his back. Daenerys asks if the khalasar is willing to cross the Narrow Sea, defeat the armies of the Seven Kingdoms, and rip down the keeps of its lords, as Drogo had promised. When they shout their affirmation, Daenerys reminds them that every khal in history has selected three Bloodriders to ride at his side at the head of the khalasar. Daenerys, however, is not a khal and does not have to abide by their rules. Therefore, she declares the entire khalasar her bloodriders.

Main: Blood of My Blood/Appearances

Daenerys and the Dothraki

See: Differences between books and TV series - Season 6#Blood of My Blood

Jaime Lannister: "I'm being sent to deal with the Blackfish. Apparently Walder Frey can't manage it on his own because he's 400 years old."

Cersei Lannister: "Stand at the head of our army where you belong, where Father wanted you. Show our men where their loyalties belong. Show them what Lannisters are, what we do to our enemies. And take that stupid little castle back because it's ours and because you can."


Jaime: "You'll stand trial soon. I need to be here for you."
Cersei: "It will be a trial by combat. I have the Mountain.They made us both stronger. All of them. They have no idea how strong we are. No idea what we’re going to do to them.We've always been together. We'll always be together. We're the only two people in the world." 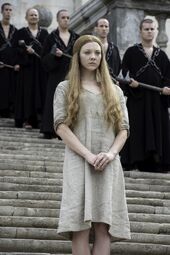 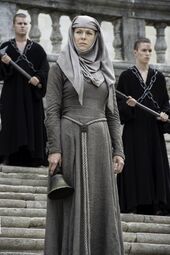 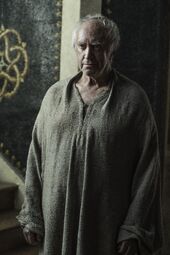 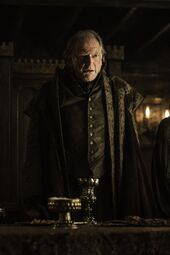 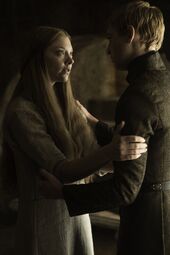 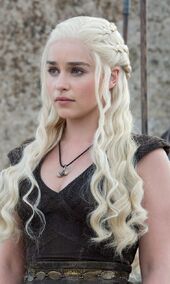 Retrieved from "https://gameofthrones.fandom.com/wiki/Blood_of_My_Blood?oldid=448910"
Community content is available under CC-BY-SA unless otherwise noted.