Start a Wiki
watch 02:16
'Game of Thrones' Recap: Battle of the Bastards
Do you like this video?

This article is about the episode. For the battle itself, see "Battle of the Bastards"

Battle of the Bastards

As the Starks prepare to fight, Davos loses something dear. Ramsay plays a game. Daenerys faces a choice.

Daenerys and Tyrion discuss a plan to deal with the Slaver fleet as the pyramid is bombarded with flaming cannonballs. Dany wants to slaughter their army but Tyrion suggests talking to the masters offering terms of surrender, telling Daenerys about her father's plan to destroy King's Landing using Wildfire, that being the reason why his brother Jaime Lannister killed him. Daenerys, Tyrion, Missandei and Grey Worm meet with the masters: Razdal mo Eraz of Yunkai, Belicho Paenymion of Volantis, and Yezzan zo Qaggaz of Astapor. They tell Dany that they will let her and Tyrion leave the city if they hand over the Unsullied and Missandei to be resold into slavery, and her dragons to be slaughtered. She tells them that she had agreed to meet with them as she was offering them a chance to surrender as Drogon flies up to meet them. She rides Drogon into the bay as Rhaegal and Viserion break free from captivity beneath the Great Pyramid to join them and they begin to burn the attacking fleet. Meanwhile, Daario arrives at Meereen with Daenerys's Dothraki horde and rout the Sons of the Harpy at the city gates. The Masters' soldiers abandon them at Grey Worm's invitation, and Tyrion gives an ultimatum that one of the three masters must die, as punishment for their disobedience. Yezzan, the lowest of the three, is immediately scapegoated by the other two for not being highborn, and as he kneels and begs Grey Worm not to kill him, this gives Grey Worm an opportunity to instantly slit Razdal and Belicho's throats instead with one slash of his dagger. Tyrion tells Yezzan to share what he had seen and what Daenerys is capable of.

In the aftermath, Dany and Tyrion meet with Theon and Yara who have arrived in the city. They offer Dany their fleet of a hundred manned ships if she will help them deal with Euron and support their claim to the Iron Islands. Tyrion is wary of Theon based on what he saw of him at Winterfell and of his crimes against the Starks, but Theon insists that he has paid for what he has done. Daenerys agrees to support an independent kingdom of the Iron Islands, on the condition that the Ironborn will cease all raiding, reaving, pillaging, and raping. Yara balks at this, but Daenerys says their fathers – Aerys, Tywin, and Balon – all left the world worse then they found it, but Dany, Tyrion, Yara and Theon are going to leave it better than they found it. Swayed, Yara agrees and the queens-in-waiting seal their pact.

Jon, Sansa, Tormund, and Davos meet with Ramsay, Harald Karstark, and Smalljon Umber before the battle. Ramsay offers surrender terms saying he will pardon Jon for breaking his Night's Watch vows and the Northerners in Jon's forces for rising against him if he will hand Sansa over. Jon offers Ramsay a chance to settle their dispute in one-on-one combat, which Ramsay refuses, noting that while he doubts he can best Jon in a duel, he is confident his numerically-superior forces will triumph in battle. Jon notes that Ramsay's men may not want to fight for him if he will not fight for them, but in response, Ramsay threatens Rickon. Jon and Sansa are wary of whether Ramsay actually has their brother to which Umber throws out Shaggydog's head as proof. Sansa refuses the terms of surrender and tells Ramsay he will die the following day before riding off.

After a meeting where Jon discusses the battle plan with Tormund and Davos, Sansa criticises Jon for attacking too early, insisting that they could have gathered more men. Jon however retorts that this is the largest army they could possibly gather. Sansa, knowing Ramsay the best, warns Jon of his cunning and cruel nature, but Jon assures her that he has faced worse. In the end, he promises to protect Sansa from Ramsay, to which she cynically replies that no one can keep anyone safe.

In the camp, Davos and Tormund discuss their time serving both Stannis and Mance respectively, with both acknowledging that they may have been serving the wrong king. After parting ways, Tormund goes to drink and Davos takes a walk. As the sun rises, he comes across the pyre on which Shireen Baratheon was sacrificed, and in the remains, finds the wooden stag he carved and gave to her the last time they were together. He finally realizes how she died. Meanwhile, Jon meets with Melisandre and orders her not to bring him back if he should fall in the battle. Melisandre contends that she will try anyway, and that it was not her gift that has brought Jon back but the Lord of Light's, and that only the Lord of Light can decide Jon's fate. Melisandre ponders that the Lord of Light may have brought Jon back to only die in the battle.

The armies gather the following morning as Ramsay brings out Rickon. After menacingly raising a knife, he cuts Rickon's bonds and tells him that they are to play a game. The only rule is to run towards his brother. As he does so, Ramsay brings out a bow, prompting Jon to hastily ride out on a horse to try to save Rickon as Ramsay fires arrows at him. Ramsay appears to have no intention of hitting Rickon with his first shots but, just as Jon approaches his brother, Rickon is struck in the back with an arrow and killed. With Jon now defenseless in the middle of the battlefield, Bolton archers fire volleys of arrows in his direction with the Bolton cavalry charging at him as well.

The Stark cavalry begin their charge to meet the Bolton cavalry, narrowly saving Jon from being trampled, as Davos eventually sends the archers forward realizing that they are of more use in the middle of the battlefield. The Bolton soldiers eventually surround the Stark forces in a horseshoe formation as Smalljon leads a group of soldiers over a large pile of corpses to attack them from behind. While Wun Wun is able to kill a few Bolton soldiers, it is not enough to break their phalanx, and Tormund sends the wildlings backwards towards the pile.

Jon is trampled by his forces, nearly suffocating under a group of men crawling on top of him, but is eventually able to get back to his feet. As it appears the Stark forces are about to lose, a horn sounds out in the distance as Sansa and Littlefinger arrive with the Knights of the Vale waving flags bearing the Arryn sigil. On horseback, they begin to cut down the Bolton soldiers from behind. Smalljon, momentarily distracted by the arrival of the Arryn forces, is killed by Tormund who bites out his foe's throat and stabs him several times. As Ramsay sees his soldiers being cut down, he decides to retreat inside Winterfell, but Jon, Wun Wun and Tormund begin to give chase. One of the Bolton soldiers insists the battle is lost but Ramsay assures him they still have Winterfell, and the Stark Army is too weak for a siege (despite the Vale reinforcements). Wun Wun, however, is able to break down Winterfell's gates allowing wildling archers to pour into the castle. The giant is nevertheless overwhelmed by arrows and finally killed by Ramsay's shot. Despite the defeat of his army, he taunts Jon, saying he has reconsidered the option of one-on-one combat. As Jon approaches, he takes shots at him with his bow, all blocked by a Mormont shield Jon picked up from the ground, until Jon overwhelms him and beats him almost to death. He stops himself after noticing Sansa, realizing she has as much right for revenge as he does. Jon subsequently orders Ramsay locked up as a prisoner.

The Bolton banners on Winterfell are torn down and the Stark Banners raised. Melisandre looks over the courtyard while Davos glares at her from below, clutching Shireen's burned stag. Jon orders Rickon's body to be buried next to his father in the crypts as Sansa asks him where he is keeping Ramsay prisoner. Sansa goes to visit Ramsay in his cell that night. He goads her by telling her how she will never be rid of him because he is "part of [her] now," but then realizes that his hounds are approaching him, Jon having deliberately left the kennel doors open. At first, Ramsay is in denial, claiming that his dogs are loyal and ordering them to heel, but after a week without food, they begin to tear him apart as Sansa walks away, smirking with dark satisfaction.

Ramsay Bolton: "My beloved wife. I've missed you terribly. Thank you for returning Lady Bolton safely. Now, dismount and kneel before me, surrender your army and proclaim me the true Lord of Winterfell and Warden of the North. I will pardon you for deserting the Night's Watch. I will pardon these treasonous lords for betraying my house. Come, bastard, you don't have the men, you don't have the horses, and you don't have Winterfell. Why lead those poor souls into slaughter? There's no need for a battle. Get off your horse and kneel. I'm a man of mercy."
Jon Snow: "You're right. There's no need for a battle. Thousands of men don't need to die. Only one of us. Let's end this the old way. You against me."
Ramsay: [Chuckles] "I keep hearing stories about you, bastard. The way people in the North talk about you, you're the greatest swordsman who ever walked. Maybe you are that good. Maybe not. I don't know if I'd beat you. But I know that my army will beat yours. I have 6,000 men. You have, what, half that? Not even?"
Jon: "Aye, you have the numbers. Will your men want to fight for you when they hear you wouldn't fight for them?"
Ramsay: "He's good. Very good. Tell me, will you let your little brother die because you're too proud to surrender?"
Sansa Stark: "How do we know you have him?"
[Ramsay nods to Smalljon Umber, who tosses out Shaggydog's severed head.]
Ramsay: "Now if you want to save..."
Sansa: "You're going to die tomorrow, Lord Bolton." [Ramsay's jaw drops.] "Sleep well."
[Sansa rides off, leaving Jon and Ramsay with their respective retinues.]
Ramsay: "She's a fine woman, your sister. I look forward to having her back in my bed. And you're all fine-looking men. My dogs are desperate to meet you. I haven't fed them for seven days. They're ravenous. I wonder which parts they'll try first. Your eyes? Your balls? We'll find out soon enough. In the morning, then, bastard."


Ramsay: "Do you like games, little man?" Smalljon Umber: "Who holds the North?!" Razdal mo Eraz: "Your reign is over."


Ramsay: "You suggested one-on-one combat, didn't you? I've reconsidered. I think that sounds like a wonderful idea."
Ramsay: "Hello Sansa. Is this where I'll be staying now? No. Our time together is about to come to an end. That's all right. You can't kill me. I'm part of you now." 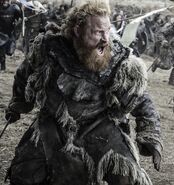 Ramsay tells Rickon to "run", as they are now playing a game.

Retrieved from "https://gameofthrones.fandom.com/wiki/Battle_of_the_Bastards_(episode)?oldid=299819"
Community content is available under CC-BY-SA unless otherwise noted.