Game of Thrones Wiki
Register
Don't have an account?
Sign In
Advertisement
in: Cities, Locations in Essos, Locations, City-states of Essos
English

Essos, southeast of the Dothraki sea

Lord of Light
Various other religions

"We could've been ten miles away from here by now, on the way to Asshai. You would've been safe."
―Ser Jorah Mormont to Daenerys Targaryen[src]

Asshai is a city located in the far southeast of the continent of Essos, on the eastern shore of the Jade Sea. This places Asshai far beyond the Free Cities, the Dothraki Sea, and the Bay of Dragons. Qarth is located closer to it, given that the Straits of Qarth form the western entrance to the Jade Sea, but it still takes many months for a ship to travel from Qarth to Asshai.

Due to the great distances separating them, the Westerosi know very little about Asshai, save that it is a great seaport and that its people are exotic. Beyond Asshai lies an area known as the Shadow Lands, which are said to lie "under the Shadow". What exactly is casting "the Shadow" is not known, nor is the exact nature of "the Shadow."

People and things from Asshai are known as Asshai'i. The Asshai'i language is unique, rarely heard in Westeros or even western Essos, and rumored to be used in powerful magic spells.

Illyrio Mopatis gives Daenerys a wedding gift of three dragon eggs, said to be from the Shadow Lands beyond Asshai.[1]

Jorah Mormont tells Daenerys that in the Shadow Lands beyond Asshai there grows a plant called "ghost grass" which the Dothraki believe will one day swallow all the world.[2]

Jorah suggests to Daenerys that they flee Khal Drogo's khalasar by night so as not to be caught up in the chaos unleashed when he dies. He says there is a port in Asshai they can head to; Daenerys refuses.[3]

Melisandre, a Red Priestess of the Lord of Light from Asshai, has converted Stannis and most of his household to her religion and become one of his closest advisers.[4]

At Qarth, Jorah encounters the mysterious woman Quaithe, a shadowbinder from Asshai.[5]

Tyene Sand reveals that she coats her daggers with a poison called "the Long farewell", which she claims is from Asshai.[6]

When Melisandre arrives at Dragonstone to meet Daenerys, Grey Worm announces her as "a Red Priestess from Asshai".[7]

According to costume designer Michele Clapton, Quaithe's mask was designed to display a stylistic link to Melisandre, since both of them are from Asshai. Melisandre wears an ornate neck piece featuring a repeated design motif of elongated hexagons, and Quaithe's mask was constructed using the same hexagonal shapes as links, though filled in with metal. Further, the dresses of both characters have the same hexagonal design motif (elongated so they are taller than they are wide). Melisandre has been seen wearing different dresses, she usually wears an all-red one but is seen wearing an alternate dress with an hexagon motif in "The Night Lands" when she has sex with Stannis.[8] (see "Costumes/Essos - Asshai").

In "High Sparrow", as Tyrion and Varys pass through Volantis, they see another Red Priestess preaching to a crowd of slaves. Later on, they encounter Zanrush and his superior Kinvara in Meereen. The chest pieces of the Red Priestess and Kinvara, and the collars of Kinvara and Zanrush, bear the same repeated motif of elongated hexagons, and the Volantene Red Priestess, another Red Priestess, and Kinvara also wear large hexagon-shaped necklaces, which in Kinvara's case is identical to Melisandre's. It's not clear if all these characters are actually from Asshai, or if the Asshai'i motif has been appropriated by the Lord of Light religion, which is followed throughout much of Essos. Given Asshai's remoteness and the sheer size of the priesthood (note that Thoros is explicitly not a shadowbinder) the latter is somewhat more likely. It's hinted that the Lord of Light religion is a case of reverse-evangelism where, instead of a religious group seeking to convert non-members, interested parties and persons join-in and voluntarily spread the faith.

The hexagon motif is the style of Asshai.

Melisandre's alternate dress has the same hexagon motif as Quaithe's. 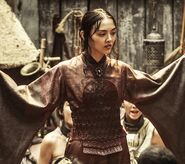 A Red Priestess in Volantis. Both her robes and her necklace have the same repeated hexagon design that Melisandre and Quathe's clothes have.

Kinvara wears the same kind of necklace as Melisandre, indicating a connection with Asshai.

A Red Priestess in Meereen, presumably summoned by Kinvara to help spread word of Daenerys Targaryen. Her clothing also bears the hexagonal motif of Asshai.

A close-up of the Red Priestess in Meereen; she wears the same type of Asshai'i necklace seen on Melisandre and Kinvara.

In the A Song of Ice and Fire novels, Asshai is said to lie on the far south-eastern shores of the Jade Sea, a body of water far to the east of the Free Cities and Slaver's Bay. It is located close to an enigmatic area called "the Shadow" or "Shadow Lands", and the city is sometimes known as Asshai-by-the-Shadow. The city is usually traveled to by ship, but it can also be reached overland by a circuitous route. The Dothraki consider the city and surrounding area to be ill-omened, while people from Asshai are distrusted as "spawn of shadows". However, the people of the Free Cities, Slaver's Bay, and Qarth don't display many qualms about pursuing trade with the city.

Asshai is reputed to hold large amounts of arcane lore, including knowledge of dragons, and dragonbone can sometimes be found in the Shadow Lands beyond the city walls. Stories told among the Asshai'i claim that dragons first emeregd from the Shadow Lands and were later brought to Valyria before the rise of the Freehold, but this cannot be confimed or denied. Gems, gold, and other valuable substances can also found in the Shadow Lands, and are commonly used as trade items; when Daenerys Targaryen arrives in Qarth, among the many gifts she receives are chests of amber and dragonglass imported from Asshai.

It is not unusual for a voyage from the Free City of Volantis to Asshai and back to take two years.

According to the TV series official pronunciation guide developed for the cast and crew, "Asshai" is pronounced "Uh-SHY", as opposed to "ASS-high", "Uh-SIGH", etc. It might also be pronounced "Ahz-Shai" or "A'sai" but it's language and pronunciation are strange to outsiders.

The Lands of Ice and Fire map book places Asshai southeast of Yi Ti (which is itself east of Qarth), on the eastern shores of the Jade Sea (which has been completely moved from its location on the HBO map). The Saffron Straits link the Jade Sea to as-yet-unknown seas to the east, and Asshai sits at the mouth of the straits. A major river, the Ash, empties into the Jade Sea at Asshai. The river flows out of the Shadow Lands, an area of mountains and hills northeast of the city, which is surrounded by Ghost grass. Further upriver from Asshai is a ruined city called Stygai. Yi Ti and the large island of Leng are located northwest of Asshai across the Jade Sea, but the closest islands to Asshai are the Manticore Isles, a small chain of land directly westward (apparently inhabited by very poisonous manticore insects). "Ulthos" lies across the Saffron Straits from Asshai, but it is unknown if it is another continent or just a very large island. The distance between Qarth and Asshai appears to be roughly similar to the distance between Qarth and Old Valyria. Asshai is located at roughly the same line of latitude as the island of Naath, placing it further south than the southernmost points of Westeros.

The World of Ice & Fire sourcebook revealed many details about Asshai. The city is apparently so ancient that even its own inhabitants don't know when it was first constructed, or even who constructed it (they will only say that a city has stood in this location since the world began, and a city will remain there until the world ends). Also, the physical expanse of Asshai is so large that Qarth, Volantis, King's Landing and Oldtown could be accommodated behind its massive land walls. According to travelers' reports, all of the buildings in the city - from palaces to hovels - are constructed of a greasy black stone that seems to diminish any source of light: even the sun is considerably dimmer in Asshai than elsewhere, and the nights are pitch black.

The inhabitants of Asshai are equally unusual. Despite the city's size and its long history as a major port on the Jade Sea, the local population is no larger than that of a market town. The Asshai'i themselves are described as highly secretive, wearing masks and veils in public and never socializing in the streets of the city. Followers of all religions and practitioners of all sorts of magic are welcome in Asshai, where nothing is forbidden. There are no beasts of burden to be found in the city; crops are impossible to grow in the area (the only living flora is Ghost grass, which is inedible); and even drinking water has to be imported. Apparently the Ash River, which empties into the sea at Asshai, exudes some noxious presence that pollutes/kills off most living things: any animals brought to the city die soon afterwards, deformed - blind fish are the only fauna of the Ash (shadowbinders are the only humans who dare to eat these fish), and the human population is seemingly rendered sterile from long exposure. For this reason, there are no children in Asshai, and the population apparently "reproduces" by purchasing foreign child slaves and raising them as successive generations of Asshai'i. In a way this somewhat makes them a parallel to the Citadel of the maesters in Westeros - more an institution than a bloodline, passing down knowledge from one generation to the next; but while the Citadel teaches scientific knowledge, Asshai teaches magic.