Game of Thrones Wiki
Register
Don't have an account?
Sign In
Advertisement
in: Articles with purely conjectural titles, Massacres and assassinations, War of the Five Kings
English

War of the Five Kings

The assassination of Renly Baratheon was an event during the War of the Five Kings. It was the direct result of the failed parley between claimants to the Iron Throne, Stannis Baratheon and Renly Baratheon, the brothers of Robert Baratheon.

Following Robert's death, his brothers Stannis and Renly claim the Iron Throne for themselves. They both know Robert's official heir, Joffrey Baratheon, is not actually Robert's son, but a bastard born of incest between Cersei and Jaime.

Stannis, from his seat on the island of Dragonstone, claims the throne as Robert's legitimate heir by right of birth, with the sole support of the lords of the Narrow Sea, houses sworn to Dragonstone. Renly, from the ancestral seat of House Baratheon, Storm's End, also declares himself King of the Seven Kingdoms with the support of House Tyrell, as well as the Stormlords, vassals to House Baratheon.[1]

Knowing his numbers were vastly inferior, Stannis sets sail to Storm's End to demand the allegiance of his younger brother and the Stormlords. Renly, however, refuses to bend the knee, citing the vastly superior numbers of his army and the fact that no lord wants Stannis as King.

Catelyn, who had been sent by King Robb Stark to discuss an alliance between Houses Stark and Baratheon against House Lannister and King Joffrey, attempts to make peace between the brothers and reminds them of their common foe, but is unheeded by both would-be kings. Stannis coldly reminds Catelyn that her husband supported his claim to the throne, even at the cost of his own life.

Stannis offers to make Renly his heir and reinstate him as Master of Laws in the small council. Stannis gives him until the night to consider his decision, adding that if Renly does not come to him by sunrise, he will be destroyed.[2]

Stannis orders Davos to smuggle Melisandre to a seaside cove nearby Renly's camp. Despite his misgivings, Davos does as ordered and smuggles Melisandre aboard a small rowboat.

The pair finds the cove to be barred by a metal gate. However, Melisandre is not cowed by the obstacle and merely removes her robe to reveal her pregnant belly to a horrified Davos. She quickly gives birth to a shadowy, human-like immaterial creature with an appearance similar to that of Stannis, that vanishes soon after leaving Melisandre's womb.[2]

That same night, as Renly's men prepared for the inevitable battle, he holds another meeting with Catelyn to discuss the terms of his alliance with Robb inside his tent. Renly offers to accept Robb styling himself King in the North, ruling over all lands north of the Neck, as long as he swears loyalty to him. Catelyn tries again to convince Renly of making peace with Stannis, only for Renly to retort that treating with Stannis will be like treating with the wind.

After Renly removes his crown and breastplate before a mirror and gives them to Brienne, the shadow born from Melisandre materialized behind Renly, quickly stabs him through the back with one of its talons. Renly falls, dead, and the shadow vanishes before the eyes of the horrified Brienne and Catelyn.

Hearing Brienne's scream, two of Renly's Kingsguard, Emmon Cuy and Robar Royce, enter the tent. Believing Brienne to be the culprit, they attack her, but she kills her two sworn brothers.[3]

The Stormlords largely swears fealty to Stannis when he arrives the following day. House Tyrell, however, leads the forces of the Reach back to Highgarden, and later forms an alliance with House Lannister. A few noble houses of the Reach, such as the Florents and Fossoways, however, bend the knee to Stannis. Brienne is blamed for the murder by many and flees the camp with Catelyn, who accepts Brienne's oath of service.

While Loras grieves over Renly's death, Margaery states that Brienne murdered him. Loras disagrees, correctly pointing out that someone else gained the most from Renly's death, and Littlefinger says "Stannis".[3]

On several occasions, Brienne is accused of Renly's murder, which she firmly denies.[4][5]

Although Renly's murder initially benefits Stannis, who obtained the strength of the Stormlords and a handful of the Reach lords, it backfired on him during the Battle of the Blackwater, as the forces commanded by Tywin are bolstered by the Tyrells, led by "Renly's ghost", and turn the tide against Stannis.[6]

After his defeat, Stannis expresses some regret for the death of his younger brother, as he is now a kinslayer with nothing to show for it.[7]

Renly's murder also ultimately results in Stannis's doom, as Brienne eventually avenges Renly by tracking Stannis down after his failed attack on Winterfell. Once she finds Stannis in the forest, wounded and exhausted from the battle, she confronts him with Renly's murder, which Stannis admits to. Thus, she sentences Stannis to death in Renly's name, and even by addressing Renly as Renly of the House Baratheon, First of His Name, Rightful King of the Andals and the First Men, Lord of the Seven Kingdoms, and Protector of the Realm.[8]

In a deleted scene from Season 2, some time after Renly's death, Loras is looking over his armor (which he presumably took from Renly's body) while talking to Margaery; he asks her if she has any idea how hard it is to drive a sword through two steel plates. It is unclear whether Renly was still wearing another piece of armor under his clothes when the shadow killed him, or this scene is a relic from an earlier draft of the script, which more closely matches Renly's death in the books.

In the A Song of Ice and Fire novels, there are two separate assassinations and two shadows carrying them out.

The first one is born in an unknown location; Davos does not witness its creation. It reaches Renly's tent in a similar way, though it slits Renly's throat - while he wears him armor - beneath his metal gorget instead of stabbing him. Also, Brienne apparently kills one of the two guards who enter the tent with Ser Robar Royce and Ser Emmon Cuy, but doesn't kill any of Renly's Rainbow Guard, since Catelyn convinces Ser Robar of Brienne's innocence, and then uses iron brazier to knock Ser Emmon unconscious. Nevertheless, both Emmon and Robar are killed by Loras in a fit of rage, with Loras also believing Brienne to be the culprit. Neither Margaery nor Littlefinger are present at Renly's camp during the events; Margaery is at Bitterbridge with the full strength of House Tyrell, while Littlefinger is still at King's Landing.

Another notable change is that in the books Stannis never admits he had anything to do with Renly's death, though it is doubtful Melisandre would have sent the shadow to kill Renly without direct order from Stannis.

When Davos asks Stannis about Renly's death, Stannis answers ambiguously: "I dream of it sometimes. Of Renly's dying. A green tent, candles, a woman screaming. And blood. I was still abed when he died. Your Devan will tell you. He tried to wake me... Devan says I thrashed and cried out, but what does it matter? It was a dream. I was in my tent when Renly died, and when I woke my hands were clean". Stannis's words can be interpreted as a statement that a guilty person may say in attempt to convince himself that his hands are clean, but it is uncertain.

In the third novel, after Davos is released from jail, he tells Stannis that he sought to kill Melisandre because she murdered Cressen, Ser Cortnay Penrose (see below) and Renly. Stannis answers "She saw Renly's end in the flames, yes, but she had no more part in it than I did". Again, those words can be interpreted either way.

Following Renly's death, Varys reports to the small council that there are many rumors about the identity of the murderer: a groom said that Renly was slain by a knight of his own Rainbow Guard; a washerwoman claimed Stannis stole through the heart of his brother's army with his magic sword; several men-at-arms believed a woman did the fell deed, but could not agree on which woman: either a maid that Renly had spurned or a camp follower or Catelyn Stark. Although Varys does not specifically mention Brienne's name, she is commonly rumored to be the murderer.

At the beginning of the journey to King's Landing, Jaime tells Brienne "We're both kingslayers here, if what I've heard is true". Brienne denies killing Renly, and tells about the shadow. Jaime laughs and says that he should have thought of such tale when he was found standing over Aerys's body. He nastily teases Brienne "did the Starks pay you to slit his throat, or was it Stannis? Had Renly spurned you, was that the way of it? Or perhaps your moon's blood was on you". Brienne is greatly offended, but controls her temper.

When Jaime and Brienne enter King's Landing, Loras confronts Brienne, accusing her of Renly's death and challenging her. Brienne tries to explain what really happened, but Loras does not believe. Jaime intervenes, commands Loras to sheathe his sword, and claims that Brienne is not a liar. Later, Jaime makes Loras understand that Brienne is innocent, based on two facts: First, Renly's armor was made of the finest steel, and no human being - not even someone as strong as the Mountain - could have sliced through it cleanly; second, if Brienne intended to kill Renly, why armor him first? Loras admits that perhaps Brienne speaks the truth after all.

Before Brienne leaves the capital to search for Sansa, she asks Jaime whether he truly meant what he had told Loras during the near-bloody confrontation - that her story about the shadow was true. Jaime shrugs and answers "I would have killed Renly myself if we'd met in battle, what do I care who cut his throat?".

Throughout the fourth novel, Brienne encounters people, among them Ser Hyle Hunt and Randyll Tarly, who accuse her of Renly's death. Brienne keeps denying that, but no one really cares about Renly's death. Randyll, who has always treated Brienne hostilely, seems to take her word that she did not kill Renly, but comments offensively "you only let him die".

The second assassination is carried out by a second shadow born after Davos smuggles Melisandre beneath the walls of Storm's End, and is sent after Ser Cortnay Penrose, the castellan of Storm's End, who refused to yield the castle to Stannis even after Renly's death. The circumstances of this assassination were transferred to Renly's death in the TV series adaptation. The second assassination takes place off-screen, and is revealed when Varys reports Tyrion that it was said Ser Penrose threw himself from a tower. Neither Varys nor Tyrion believe that, figuring Stannis was responsible. Varys points out the strange connection between the two murders of Renly and Ser Penrose, and speculates (correctly) it was witchcraft. Tyrion is skeptical, believing (incorrectly) that Stannis has hired a skilled assassin from the Free Cities.

Similarly to Renly's death, Ser Cortnay's death initially seems to benefit Stannis, but backfires at him at the battle: the delay at Storm's End for one day, against Davos's advice, who urges Stannis to leave for King's Landing immediately, enables Tywin and the Tyrells' reinforcements arrive at the critical moment, just when Stannis's troops start invading the city.

Renly's death has been prophesied by an old woods witch known as the Ghost of High Heart: "I dreamt I saw a shadow with a burning heart butchering a golden stag". 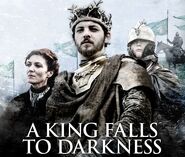 A promotional image referencing the Assassination featured on the HBO viewers guide.