It was rushed, way too simplified in comparison to how the show used to be, was nonsensical, stupid, characters were written badly, ...

(edited by Freaky Ass Smile Lord)
A reply to Athenastark07
0

Jorah is good but it's Jaime Lannister lol

Yeah Littlefinger is such an awesome character that often gets under appreciated. It always intrigues me when a character seemingly not that important at first plays a huge role in the events.

Anyways Stannis the Mannis. Tywin, Jaime, and Tyrion are some great characters too. 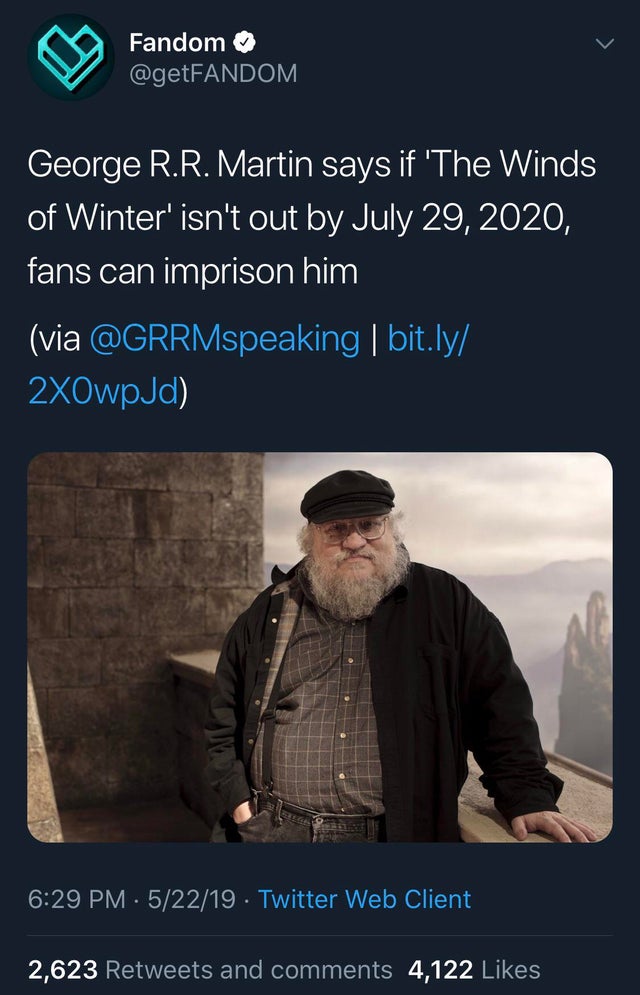 Wow I forgot that Salladhor existed. Enjoyed him tho, wished to see more of him, especially in the show. Anyways Arthur Dayne.

Wow I forgot that Salladhor existed. Enjoyed him tho, wished to see more of him, especially in the show. Anyways Arthur Dayne.

A reply to Greater good
1

Oh wow, great, happy for her

Yeah, I loved how they did the slow build up to killing Freys in the books.

Many people have many problems with Season 8. It's rushed, it's nonsensical, the characters are annoying, it's unrealistic as fuck, etc. I also despise all of that. But there's one thing I dislike a lot about Season 8 that people don't mention very often.

The world feels so empty.

There are so fucking few locations in Season 8. You have Winterfell and King's Landing...that's about it. You also see a bit of the Wall in the finale, Dragonstone in 8x05, Last Hearth in 8x01, and a few other minor places but that's like fucking it.

I don't like season 7, and I feel like the world also felt quite empty there, but it was still better there. King's Landing, Winterfell, Oldtown, Dragonstone, ugly Casterly Rock & Highgarden, the Wall, Eastwatch, the Twins, some more places, were all locations in S7. At least that's still something.

And then we get to S8. Now one could argue that there weren't many possibilities for locations. There were. Now, hadn't the season been rushed, but remained with the same ending, they at least could've done something like a battle in the Riverlands, maybe in other northern locations, maybe see Storm's End or some of the Stormlands. Nah. Only two locations. Let's have the world feel dead.

In S8 E6, we see a bunch of lords from different kingdoms. But...I don't care. We don't know these people, and seeing Randym Martell isn't going to make me feel like Dorne is lively and fun. No. These are random characters with no name and we are supposed to think that they're important for certain kingdoms lol.

Look, I really don't know how George is going to end the books (if he ever will). Now, I'm fairly certain that Bran will become king, but I imagine that several things have got to be different from the show. There are POV characters, who I doubt will all be happily together in the entirety of the seventh book. Let me list a bunch of things that are going on at the end of the book 5, A Dance With Dragons:

- Siege of Meereen with a bunch of characters on both sides, Victarion Greyjoy about to join, got Barristan Selmy, Tyrion Lannister, Jorah Momont, ...

- Stannis Baratheon against the Boltons in the North

- Conflict in King's Landing with Cersei Lannister and others

- Jaime Lannister and Brienne of Tarth in the Riverlands, about to meet Lady Stoneheart

- Things at the Wall

- Samwell Tarly at the citadel

- Doran Martell conspiring against the Lannisters

- Sansa Stark and Petyr Baelish in the Vale

- The Others beyond the Wall

- Bran Stark beyond the Wall

There's more I did not list, but as you can see, there's still a lot of storylines going on, that'll probably not all get finished in book 6. Yet D&D decided to do things more simplified, and we ended up with the boring world of Season 7 & Season 8. Previous seasons, like S6, also had flaws in terms of how lively it felt, but it felt actually quite lively.

So yes, this is one of the things that bothers me the most. The world became so boring and empty, it's really not fun at all. Let's see how the books will handle this. At least it'll still be great during The Winds of Winter.

A reply to Rose Blackie
0

He wanted to do strange things with his sister's corpse.

How did Ned Stark die?

A reply to Munshi Rahat
0

But the Reach seems pretty cool to me.

Lol this poll is so random

I like to see the scene as Jaime kinda toying around with Ned. Anyways, Jaime definitely wins. (Also, note: book Ned wasn't even as skilled as show Ned for fighting)

A reply to Rose Blackie
0

A prostitute army with her toes that she cut off.

What is the title of the last episode of the series?

Kinda hard to picture any of these surviving up to the end. I suppose Benjen would be quite cool tho.