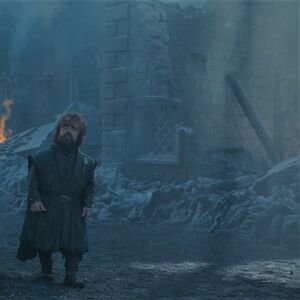 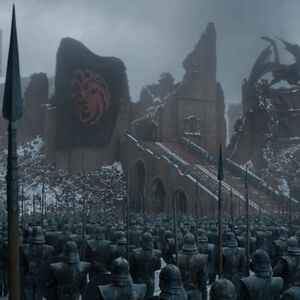 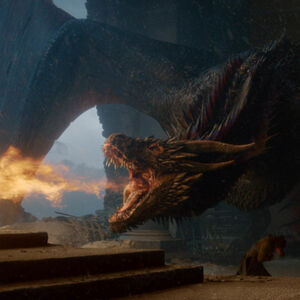 D&D have confirmed that Drogon took Daenerys' body to Volantis, where supporter Kinvara is High Priestess of the Red Temple resurrectionists.

Season 8WinterfellThe Long Night (episode)A Knight of the Seven KingdomsThe Iron ThroneThe Last of the StarksThe Bells
Won't be a popular review but this is what I personally feel about these two. These two women have suffered too much. Both have their own ways to take revenge and avenge the death of their loved ones. When we compare them we see there's so much difference. Cersie only had Jamie with her all along. Her father always tried to sell her off so that he can be in power and control Kings Landing. She loved her children dearly and lost all three of them. She herself said once to Tyrion that she lives only for her children. But still she never stood down even when Jamie left her she never bowed to anyone. She was strong till the end and remained one of the strongest character even after loosing everyone on her side. On the other hand we have Daenerys Targaryen and all her claim to the Iron Throne was based on her family lineage. She always had someone or the other to guide her through this long journey. But when she does loose all of her close advisors including her Jorah and her best friend Missandei she goes all mad like her father. She couldn't take more of loosing the one's she loves and destroys King's Landing and kills thousands of innocent people. I know people out there are blaming D&D about ruining a character but if you observe carefully they have always given us signs about how a Targaryen alone is a danger to the world.
Daenerys TargaryenCersei LannisterGame of Thrones (TV series)DragonsThe Iron Throne

Did you see her downfall coming? Do you believe the writers did her justice? I want opinions.

Personally I loved her journey from that scared and abused child being sold to a stranger, as she transformed into a strong, confident leader who really cared for her people. The contrast between the woman who embraced her new Dothraki culture, learnt languages to communicate with her people, freed slaves and fought for what was right and this cold, ruthless pyromaniac doesn't fit with me.

I know that there were times in the earlier seasons where she didn't always make great decisions but these last two seasons (mostly 8) have seen a complete change in personality. While I understand the 'Targaryen Madness' and the parallels with her father, he was really mad, ranting and raving etc. She shows no signs of madness, simply an intense need for revenge (understandable to a point) and a growing lust for power, both of which lead to her irrational behavior. Maybe I would have believed it more if it hadn't been so rushed, I don't know. I just find it hard to believe that after losing two of her own children she burns an entire city of them, especially with her history as the breaker of chains.

I wanted to see Dany Queen of the six kingdoms, but the Dany that they wrote in those last few episodes I knew had to die before she could cause any further damage.

Aren't the three eyed ravens (taking from the books) supposed to live centuries? If that is true the ending makes even less sense.

Apart from wether or not you liked the fate of the characters we have all come to love over these past years, I'm convinced that a different order of episodes would've made this whole season better. Looking back on it a 2 episode prelude to the giant anticlimax that was The Long Night was completely unnecessary. They just built up the tension and then failed us utterly, which made it all the more painfull. If they'd have balled up the first 2 episodes into one, the climactic arch would've been smaller AND they'd have had time to spread the last episode over 2 episodes. The first half of the last episode was, in my opinion, practically perfect. How great it would've been to end that episode with Drogon melting the Iron Throne and flying away in that sad, majestic way he did, with the perished Dany in his loving claw. Then in the second episode, characters would've had a worthier goodbye, instead of a few hastedly cut last impressions.

Your thoughts on this?

RIP Mother of Dragons... but really.

I went in knowing that it would be ugly, bloody, and messy. That no one would really be 100% happy with any outcome... because it’s Game of Thrones!

Honestly, I think it was good story telling.

I always knew another Targaryen shouldn’t be on the Iron Throne, and that in the end, even in spite of her epic arc, it wouldn’t be Dany.

Daenerys was chilling as she went from one of our most beloved heroes to one of the darkest villains.

I feel at least she got a good ending for what it had to be.

She didn’t break the wheel... and while she became part of that wheel, and with her death was the redemption of it finally being broken.

As for the rest.

Bran. You were weird, but hey. It works.

Jon. Oh that closing scene made me tear up a bit.

♥️ It’s been a fun journey. Sad it’s over, though.

Season 8Daenerys TargaryenThe Iron Throne
Jon reuniting with Ghost & Tormund ( importantly good boy got petted)
Brienne completing Jaimes chapter of being a knight
Sansa THE QUEEN OF THE NORTH!
SER PODRICK FUCKING PAYNE
Daenerys death and Drogons revenge on the throne
Arya Stark, Queen of The New World
Tyrion achieving what he wanted all along, PEACE

Game of Thrones (TV series)The Iron Throne
Going mad?
Just mourning the loss of rhaegal and Missandei?
Going to be betrayed by Varys?
Jon will kill dany?
Or others unmentioned?

Season 8Daenerys TargaryenThe Iron Throne
Jaime—murder suicide (trust the prophecy)
Arya—uses Jaime’s face or another way
Daenerys+Drogon—Dracarys
The Hound—kills bro then kills Cersei
Cersei the Cruel—poisoned by her enemy (herself)
Something/someone else (??)

Predictions on the 2 very much alive dragons? Thoughts?

DrogonRhaegalThe Iron ThroneThe Bells
Yes, because Azor Ahai nissa nissa prophecy, theory
No, because that won’t likely happen
Maybe, but how the last 3 - 2 address this?