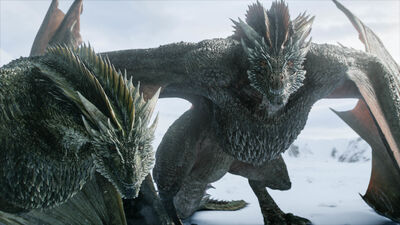 For the unit of currency known as "Gold Dragons", see "Currency". Dragons are massive, flying reptiles that can breathe fire. They are rumored to have a strong connection to magic, which seems to be proven true when magic begins to return to the world after the birth of the first three in over... 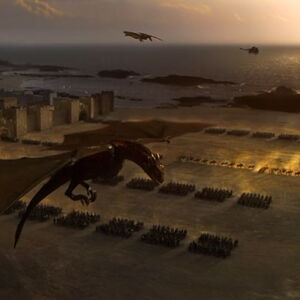 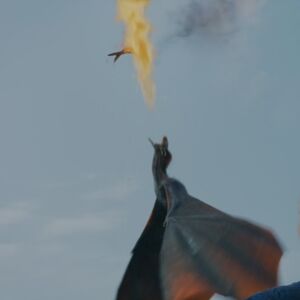 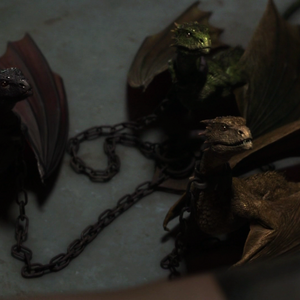 What if Robert pulled through and survived the boar attack?

(In this timeline, he survives after being injured. Cercei makes her best attempts to kill him, but they all fail. Ned tells Rob about Cercei and Jaime, so their executed. Etc.)

(With Robert alive to fight Dany whenever she arrives, what changes in the war? Will Robert be strong enough to to defend himself after his (possible) war with Tywin for killing Cercei and Jaime?)

Please answer the question and if you can’t, don’t comment.

How did Rhaegal and Drogon survive being in The North during Winter?

(edited by Khaleesi emeline)
Jon SnowDaenerys TargaryenNight KingViserionDragonsDrogonRhaegal
Yes
No
Maybe, how can it forshadow something large?

House TargaryenDragonsBalerionHouse of the Dragon
Yes
No
Maybe

I think that Dany will go (kind of ) crazy in the books, like she does in the show, but it'll be "helped" by some person, like Melisandre "helping" Stannis. For example, by the red priestess we saw for about one episode that disappeared right after. It (kind of ) makes sense, because Dany is somewhere in Essos (I think) , and the Red god is also worshiped in Essos, and in the show we see that the red priestess thinks that Dany is Azor Ahai, so she might make her burn people and stuff, like Melisandre did with Stannis. Also, Dany's family's words were “blood and fire”, and the priestesses both use blood magic(shown by Melisandre) and they burn people(so kindly shown by Melisandre again). And Dany happens to have three human eating, fire-breathing dragons. 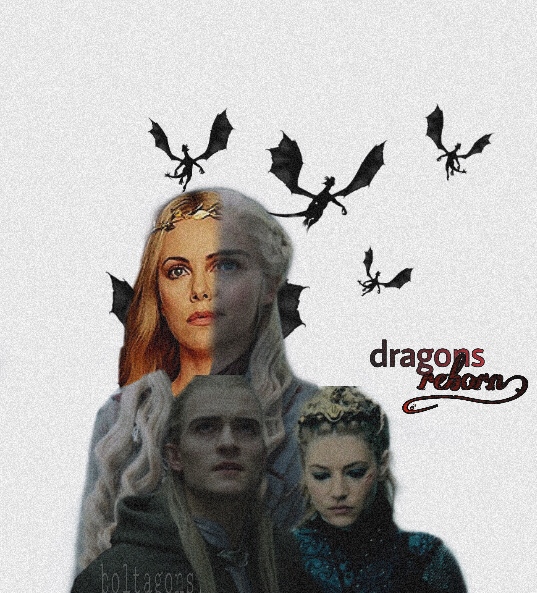 a poster for dragons reborn,

including the likes of

Dragons Reborn is a Game of Thrones fan-fiction made by me on Wattpad. My username is boltagons, same as here.

Mine would be a the color of the targaryen banner such as drogon and Balerion.

DragonsDrogonBalerion
Won't be a popular review but this is what I personally feel about these two. These two women have suffered too much. Both have their own ways to take revenge and avenge the death of their loved ones. When we compare them we see there's so much difference. Cersie only had Jamie with her all along. Her father always tried to sell her off so that he can be in power and control Kings Landing. She loved her children dearly and lost all three of them. She herself said once to Tyrion that she lives only for her children. But still she never stood down even when Jamie left her she never bowed to anyone. She was strong till the end and remained one of the strongest character even after loosing everyone on her side. On the other hand we have Daenerys Targaryen and all her claim to the Iron Throne was based on her family lineage. She always had someone or the other to guide her through this long journey. But when she does loose all of her close advisors including her Jorah and her best friend Missandei she goes all mad like her father. She couldn't take more of loosing the one's she loves and destroys King's Landing and kills thousands of innocent people. I know people out there are blaming D&D about ruining a character but if you observe carefully they have always given us signs about how a Targaryen alone is a danger to the world.
Daenerys TargaryenCersei LannisterGame of ThronesDragonsThe Iron Throne
How Well Do You Know the Animals of 'Game of Thrones?'
1107 takes
(edited by administrators)
DirewolvesDragonsGhost

One of them involves Drogon melting the Iron Throne. What if the Iron Throne had a will of its own. Like the one ring. And that it's very existence was to keep having the people of Westeros fight an endless war that would eventually destroy not just Westeros but the entire world of GOT and to have tyrants sit on it. So that would mean that when Dany talked about "liberating" all the peoples in the world of GOT, her "son",Drogon, fulfilled that promise indirectly. So Drogon is perhaps now called "Drogon: the Liberator." And another thing is that since Balerion created the Iron Throne, it might be that Drogon is Balerion's heir and that it was in a prophecy like,"The Chair of Iron can only be undone by the blood of Balerion" or something. Therefore finally freeing the world of GOT from the tyranny of the self-willed Iron Throne. Seems fitting that since a dragon made the Iron Throne that has ever since then,plagued Westeros by its influence on the denizens of Westeros, a dragon of the same bloodline should be the one to end it all.

Another theory is that for Drogon,he may have lost his brothers and his "mother", there might still be hope for him. I'm actually planning to make a story about this theory where after he takes Dany's body to wherever he takes her, he meets a female member of his species who shows or tells him about a lost hidden world that is either A:a hidden island like Skull Island or B: and underground world like HTTYD 3,Ice Age 3 or Journey to the Center of the Earth. where Dragons,Dinosaurs and other ancient creatures avoided the face of extinction. Drogon also encounters a Griffin who is king of the lost world and explains to him that since Aegon's Conquest, Dragons were no longer ruled this lost world and that the Griffins and Phoenix's and Birds took charge in place of the Dragons but it was foretold that a Dragon will come to start a new Dragon Dynasty and save the lost world from a ancient evil that is either The Night King's spirit returning or something else. If you guys are interested in this, please share your thoughts and opinions about these theories and let me know what you guys like.

Sure, there's magic in the world of GoT, but I was asking myself the very same question during the sack of King's Landing.

OK, But Do Dragons Ever Run Out of Fire?io9
Daenerys TargaryenDragonsDrogonThe Bells

After watching “The Bells,” I have gone through all the stages of grief, and I have come to acceptance.

I had a feeling all along that the buildup to Daenerys ruling Westeros wouldn’t really pan out long ago. This story loves to build us up, only to yank out the rug.

The extent of her cruelty and ineptitude as a Queen has been foreshadowed since Season 1- and hers has been a dramatic story arc that depicts her going from a girl who has nothing to one of the strongest characters in the show.

This is very similar to the “Dark Phoenix” trope. Daenerys is one of the most beloved characters... making her fall from grace exceptionally painful.

Honestly, I have always related to Daenerys, and I realized just today, that not long ago, I was in a similar dark place. Thankfully, I don’t have a dragon.

My family is in shambles, and I’m very alone in that way. I’m in a new place, and I have lost connections to those who were once my best, most loyal friends.

I’d found a person who was an unlikely romantic interest, and although I tried not to get my hopes up, others insisted on what a good match it was... and I let my guard down...

Of course, he “betrayed” me. I’m sure that’s how Dany felt. A chance at happiness in spite of all the darkness. Hope.

Then with that final stab of abandonment. It broke me.

I went into a very dark place. I became hurt, and I felt very bitter for a time.

Again. Thankfully I don’t have dragons. Even so, I probably wouldn’t have acted so impulsively. However, when viewed metaphorically... after all the personal loss, I can relate to that moment- the only one we see Dany’s face. The tears, the confusion, the blind rage.

I think Emilia Clarke said it herself. There’s that moment when we can put the chocolate cake down, and walk away, or we can just give in, even though we know we shouldn’t. We all have it in us.

So, as hard as it was to watch... I understand, and in a less rampage-y way, I can actually relate to Daenerys, again.

I mean, I had goosebumps when she burned the iron fleet and the golden company and yea the signs were there for the whole “mad queen” deal. But she just Kept On Going.

Aryas off to sharpen up needle and rewrite her list.

Jon is off in a corner somewhere staring at the wall brooding and regretting not banging his Aunt last night. Definitely not fit to be crowned. (The “I don’t want it” thing just fucks me right off, you can’t always get what you want princess)

Where is Tyrion by the way? Valonqar prophecy was just words on paper evidently.

I’m pretty gutted for Brienne, I was hoping Jamie would go and kill his Sister and return to our gorgeous she Knight. But now she can be the head of Sansa’s Kingsguard (queensguard, whatever)

Bonus points for Clegane Bowl.. a shame that the original actor couldn’t have played the mountain instead of that guy from the goonies. And Qyburns death was pretty well perfect.

Sansa or Gendry for what’s left of the Throne, Arya to kill Dany, Jon to retreat up north to flat with Tormund. Tyrion and Sansa to get back together and rule? ????

Bring on the finale .. I can’t handle much more of this.